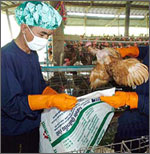 Thai workers remove chickens to be destroyed at a farm in the central province of Suphanburi, Thailand

H5N1 - this string of numbers and letters representing a strain of avian influenza, or bird flu - is alarming for the international public health community.

Avian flu is common and often spread by migratory birds. In recent years, sporadic cases of bird flu have affected poultry, and sometimes the virus mutates to affect humans as well.  In May 2005, the World Health Organization  reported that 97 humans had contracted the avian flu since late 2003, and 53 of those infected died - a 53.7 percent fatality rate.

Health officials around the globe hae monitored for the illness since. 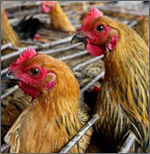 A Timeline of Avian Flu

If the virus acquires genetic refinements enabling human-to-human transmission, the situation may become dire. Some experts predict a worldwide epidemic could, in a worst case scenario, rival the impact of the HIV/AIDS epidemic. With the ubiquity of modern air travel, the virus could spread throughout the world in a matter of weeks.

Such a pandemic holds the potential to intensify the divisions between the world’s rich and poor: Wealthier nations would have access to limited supplies of vaccines and antiviral drugs, while the poor would suffer for lack of treatment.

Health officials underscore the importance of preventive measures and preparation to avoid a pandemic. In this Special Report, YaleGlobal examines the nature and impact - both current and potential - of the avian influenza.

What is Avian Influenza?

There are several strains of avian influenza, but the H5N1 virus - which occurs mainly in birds and less commonly in pigs - poses the greatest threat to humans. Though bird flu generally does not infect humans, several cases have been reported since 1997. Because of its ability to mutate rapidly and acquire genes from viruses infecting other animal species, H5N1 is particularly insidious. According to the US Centers for Disease Control and Prevention, symptoms range from typical flu-like symptoms including fever, cough, sore throat and muscle aches to eye infections, pneumonia, severe respiratory diseases, and other life-threatening complications. 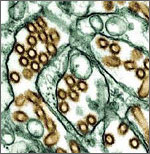 H5N1. A strain of avian influenza has everyone concerned

The Spread of Avian Flu

All viruses, including influenza, must invade living cells  to reproduce. If both a human influenza virus and an avian influenza virus enter the same cell, they may randomly trade genetic material. This process, known as reassortment, gives rise to new viruses that resemble both the human and avian strains.

Research suggests that the trigger for the 1918 Spanish Flu pandemic was originally an avian influenza virus. Currently, human-to-human transmission is not a threat, though given the adaptability of H5N1, such a genetic mutation could be possible. The virus in some countries has been identified in pigs, which according to the journal Nature, “can harbor both bird and human flu viruses, and act as a ‘mixing vessel’ for the emergence of a strain of avian flu that can easily infect humans.” Since humans have not previously developed immunity to the H5N1 virus, a pandemic could be devastating. And because the virus mutates so rapidly, it may be quick to develop resistance to treatments. For this reason, preventive efforts are essential. 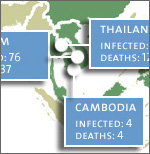