Coffee: A Long Way From Ethiopia 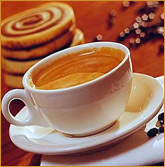 Whether it is mocha java, kahveh, a cuppa joe, or half-decaf, skim, no-whip latte, coffee seems to be everywhere - even in Beijing’s Forbidden City [since closed]. But this ubiquitous pick-me-up was not always so prevalent nor always so popular. At varying times a carefully guarded secret, at others a banned drink, these did not prevent the dark brew and its aroma from spreading from its place of origin in Ethiopia to the world.

Story has it that coffee was discovered by an attentive Ethiopian goatherd who noticed a frenzy overcoming his flock after eating the ripe berry. From Ethiopia, coffee moved to Yemen where it was cultivated for centuries before it arrived in Turkey in 1453. In Turkey the seeds were roasted and then mashed and mixed with water, creating a brew similar to modern coffee. 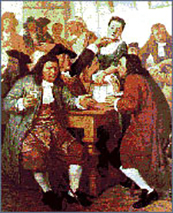 Italian traders introduced coffee to Europe and in 1600 Pope Clement VIII blessed the bean because it was claimed to help sober a population whose fluid intake was largely alcoholic beverages. By the beginning of the 18th century, coffee had sailed to India and Indonesia with the Dutch. And while the Ottoman Turks had failed to overrun Vienna, currently home to more than 1,700 cafes, their coffee had conquered the city by the time the first coffeehouse opened in 1675.

As the beverage gained popularity, the plant itself remained scarce until the Dutch foolishly gave a coffee bush to Louis XIV. Europe’s cooler climate prevented the coffee plant from thriving until it was nurtured in a greenhouse. Some even suggest that coffee was the mother of the greenhouse invention. However, coffe production did not begin to explode until French naval officer Gabriel Mathieu de Clieu brought a single plant to Martinique in 1723. Within 50 years one plant had fostered 19 million more on the island.

Coffee made its way to Brazil in 1727, hidden in a bouquet of flowers, and quickly spread throughout the rest of Latin America and then onto Hawaii by 1823. In 1893 coffee returned home to Africa where it settled in Kenya and Tanzania. After a millennium of traveling, coffee had circumnavigated the globe.

Today, Brazil is the largest producer of coffee, harvesting more than 1 billion kilograms in 2001. Vietnam, which did not start growing coffee until 1914, is the third largest producer with 780 million kilograms in 2001. Two types of coffee are produced worldwide, arabica and robusta. Arabica, which takes its name from its origins in the Arabian peninsula, accounts for three-quarters of world production and is grown mainly in South America. Robusta, accounting for one quarter of world production, is found mainly in Africa, Asia, and Indonesia where its hardiness can withstand the climate better than arabica. Robusta also has a higher caffeine content.

After a mythical birth and secretive adolescence, coffee has emerged a world traveler. A glance at any business meeting, friendly encounter or morning rush hour shows that coffee is a global invigorator.