The first night of debate for the US 2020 presidential race featured for 10 Democratic candidates, and almost half the discussion covered topics related to foreign policy. Time constraints were tight, with total response time for each candidate ranging from about 5 to 11 minutes. Even so, for the most part, responses were specific, civil and based on policies. “A challenge for the Democratic opposition candidates is that the US economy is on a roll, with the unemployment rate at 3.6 percent, GDP growth near 3 percent and interest rates stable,” suggests this YaleGlobal summary. “Still, voters express uneasiness about future prospects: job security amid increasing global competition and automation, massive debt of all types, and rising costs of health care, education and housing. The candidates underscored how issues like climate change, immigration and health care are related to economic security. A second group of 10 candidates debates tonight. – YaleGlobal 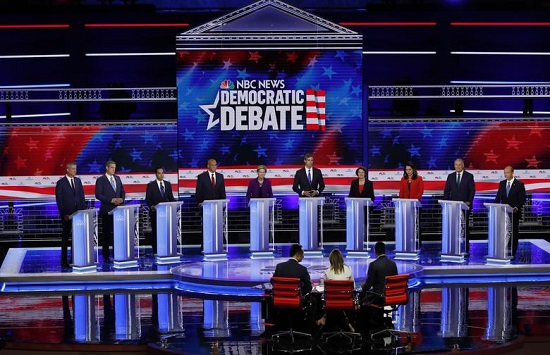 EAST LANSING, MICHIGAN: Concerns about the US economy and inequality dominated the first Democratic debate for the 2020 presidential race, featuring 10 of 24 candidates. The group tackled foreign policy specifics and promised respect for allies. There was general agreement that the United States has a responsibility to protect people threatened by their governments even if the atrocities do not affect American core interests, with the president seeking congressional authorization. The group expressed willingness to try ideas from other nations like universal health care.

A challenge for the Democratic opposition candidates is that the US economy is on a roll, with the unemployment rate at 3.6 percent, GDP growth hovering at 3 percent and interest rates stable. Still, voters express uneasiness about future prospects: job security amid increasing global competition and automation, massive debt of all types, and rising costs of health care, education and housing.

Corporations were the major target, with candidates criticizing growing power and consolidation and citing the need for more regulations, especially around campaign financing. The United States has an industrial policy, Warren observed, and “it’s basically been let giant corporations do whatever they want to do. Giant corporations have exactly one loyalty, and that is to profits.” While laws are in place to monitor corporations, she concluded, “What’s been missing is courage, courage in Washington to take on the giants.” As observed by the Financial Times, anti-corporate populism can swing left or right.

Republican leaders have successfully linked fears about economic insecurity to immigration. “The way that American citizens have been told that immigrants have somehow created their misery and their pain and their challenges, for all the American citizens out there who feel you’re falling behind or feel the American dream is not working for you, the immigrants didn’t do that to you,” argued de Blasio. “The big corporations did that to you. The 1 percent did that to you.” Senator Amy Klobuchar agreed: “Immigrants, they do not diminish America. They are America.”

Julián Castro, former US secretary of the Department of Housing and Urban Development, spoke to the need for immigration reform, urging a large-scale type of Marshall Plan for Honduras, Guatemala, and El Salvador – to improve those economies and stem the poverty and violence spurring so many people to flee. He also promised to end a zero-tolerance policy on immigration and family separations and urged a citizenship path for undocumented immigrants without a criminal record. Senator Cory Booker also promised to review policies: “When people come to this country, they do not leave their human rights at the border.”

With so many candidates, all could not comment on each topic, and total response time for each ranged from about 5 to 11 minutes, reports the New York Times. Congressman Tim Ryan and others expressed concern for forgotten communities that have fallen behind and worry about costs of policies that offer benefits over the long term. Some candidates trail in the polls, attracting voter support in the single digits, and their embrace of broad challenges like climate change may do little to lift those issues to prominence.  One questioner pointedly asked about cost worries forcing governments to backtrack on climate change initiatives in Washington State, Australia and France.

Warren took an economic approach on handling climate change, urging increased investment on research and development for green technology, making that accessible to all nations for what she anticipates being a $23 trillion market. A protectionist twist was her proposal requiring product manufacture in the United States.

National security provokes more anxiety. The candidates underscored the need for the president to pursue congressional authorization for the use of military force. “And this president is literally every single day 10 minutes away from going to war, one tweet away from going to war,” commented Klobluchar. The candidates supported renegotiation and return to the international agreement that limits Iran’s nuclear program, with Klobluchar noting US withdrawal gave unlimited leverage to China and Russia.

Tulsi Gabbard, congresswoman and a major with the Army National Guard, objected to unnecessary escalation of tensions, especially with Iran, adding that the United States is at “the brink of war with Iran.” She deplored the high cost of war, suggesting that “our leaders have failed us, taking us from one regime-change war to the next, leading us into a new cold war and arms race, costing us trillions of our hard-earned taxpayer dollars and countless lives.”

Candidates were divided over withdrawal of troops from Afghanistan, in place since the invasion in late 2001. Ryan argued that the United States must “stay engaged in these situations,” while Gabbard urged withdrawal and investing instead in US communities. “We are no better off in Afghanistan today than we were when this war began.” She suggested tackling the root causes of extremism and called out Saudi Arabia for protecting groups like Al Qaeda.

The aberrant, loose gun laws in the United States add to anxiety, and the candidates spoke about the need to tighten laws around purchases and improve background checks. Ryan proposed trauma-based care in every school.

Polarization remains a challenge, and John Delaney, former congressman and entrepreneur, urges Democrats “to become the party of getting things done for the American people, with real solutions and not impossible promises.”

Each candidate named what they viewed as the biggest geopolitical treat to the United States:

Read a transcript of the debate from NBC News.

Susan Froetschel is the editor of YaleGlobal Online.