Due to their own failures and insecurities, white supremacists emphasize otherness, resenting minorities and trends toward greater equality. While some of the most extreme have views that overlap with the alt-right movement, they express impatience and embrace an ideology of accelerationism, which “rests on the idea that Western governments are irreparably corrupt,” explains Zack Beauchamp. The ideology has roots in an eccentric academic program that focuses on the fall of the Soviet Union and the rise of capitalism, technology and the internet. White supremacists do not find democracy useful for their goals, expressing an odd mix of support for authoritarianism on their terms along with concern about loss of their individual rights. One group Atomwaffen organizes “hate camps” with rifle practice. Others distribute fliers and support the most extreme politicians, left or right. White supremacists fail to attract a big following, and the goal is to heighten chaos and political tension, relying on acts of decentralized violence, to thwart police, destroy governments and instigate social collapse with the unrealistic expectation that white domination will follow. – YaleGlobal

Read the article from Vox about an extreme form of white supremacy.

Zack Beauchamp is a senior correspondent at Vox, where he covers political ideology and global politics. He also hosts Worldly, Vox’s podcast on foreign policy and international relations. 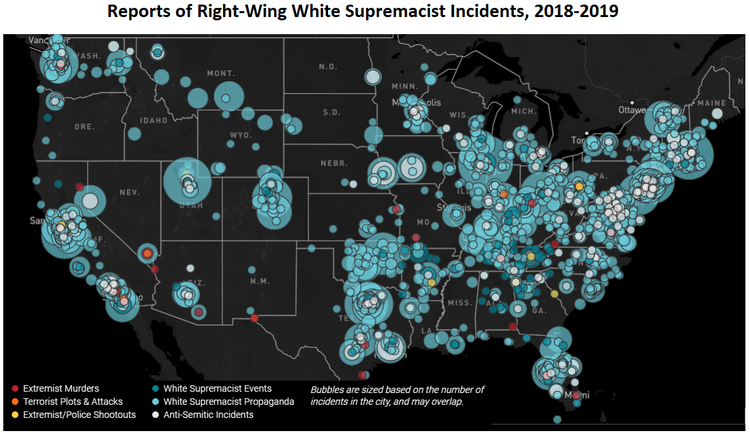 Rising threat: The Anti-Defamation League provides an interactive map of extremist incidents in the United States, provides a filter for sorting by year and incident category (Source: ADL)