Just after Iraqi leaders chose a new prime minister and president, the leaders of Al Qaeda – Osama bin Laden, Ayman al-Zawahiri, and Abu Musab al-Zarqawi – hurriedly released a series of statements to the media. The media blitz represents the most concerted effort to date by Al Qaeda leadership to articulate its investment in the ongoing conflict in Iraq – and suggests that a viable government, representing all Iraqi interests, could deal a fatal blow to the terrorist organization. Al Qaeda had been floundering before the Iraq war, but the US invasion gave the terrorists new impetus and a fresh supply of recruits in its global jihad. Evidence suggests that the Sunnis are ready to take on the challenge of political participation in their country’s reconstruction. Iraq’s future is far from certain, but Iraqis have made it clear that they don’t yearn for an Islamic state organized by Al Qaeda. – YaleGlobal

Propaganda blitz by bin Laden, al-Zawahiri and al-Zarqawi may be aimed at hiding their weakness
Fawaz A. Gerges
Thursday, May 11, 2006 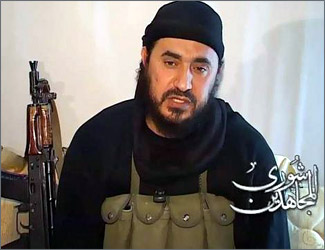 Hair-raising threat: Recent boasts by terrorist leaders like Abu Musab al-Zarqawi may be designed to hide their weakness

BRONXVILLE, NY: Only days after Iraqi leaders selected a new prime minister and president, Al Qaeda launched a media blitz. Never before had the network’s top three figures – Osama bin Laden; his right-hand man, Ayman al-Zawahiri; and their commander in Iraq, Abu Musab al-Zarqawi – so synchronized their messages. In the space of a single week, they fell over one another urging resistance in Iraq as part of the greater global war with the West.

To what do we owe this dash for media time?

The new volley of messages from Al Qaeda leaders near and far is undoubtedly a response to tentative political progress achieved by Iraqi leaders toward forming a national unity government. In the eyes of Al Qaeda's leaders, a political settlement in Iraq would be disastrous for Al Qaeda. Its base in the country’s Sunni population would evaporate if Sunni Arabs, who lead the resistance, laid down their arms to take their place in a coalition government. Al Qaeda’s leadership knows their very existence in the war-torn country depends on Sunni consent and support; they cannot survive, politically or militarily, if Sunni Arabs turn against them. In a letter to Zarqawi, head of the network branch in Iraq, intercepted by US authorities in October 2005, Al Qaeda No. 2 Zawahiri, chided him for indiscriminate killings because that risked alienating Sunni Arabs. In the absence of this popular support, Zawahiri wrote, “the jihadist movement would be crushed in the shadows.”

In their messages, Al Qaeda’s leaders trumpeted their “accomplishments.” Hundreds of suicide bombings in Iraq have “broken the back” of the US military, boasted Zawahiri in his 16-minute video posted on an Islamist web site. Zawahiri – bespectacled and wearing his customary black turban and white robe, sitting in front of a white curtain with rows of lace embroidery – asserted that American and British forces, bogged down in Iraq, “have achieved nothing but loss, disaster and misfortune.”

Just days earlier, the shadowy Zarqawi had made his first appearance on video. Raising his profile after months of laying low, he dismissed the embryonic Iraqi government as an American “stooge” and a “poisoned dagger” stuck in the heart of the Muslim world. His turn of phrase – in contrast with the workmanlike terminology of bin Laden and Zawahiri – is often chillingly evocative. He addressed President Bush personally: “By

God, you will have no peace in the land of Islam. Your dreams will be defeated by our blood and by our bodies. What is coming is even worse.” Zarqawi promised more attacks against Iraqi police and army who serve the foreign occupiers: “We will have ... battles that will turn children's hair white.”

The Zawahiri and Zarqawi videos followed by only days an audiotape from bin Laden exhorting Muslims to support Al Qaeda in the fight against foreigners, particularly in Iraq. “Their defeat in Iraq will mean defeat in all their wars and a beginning to the receding of their Zionist-Crusader tide against us. Your mujahedeen sons and brothers in Iraq have taught the US a costly lesson during the fourth year of the Crusaders’ invasion,” said

bin Laden in an audiotape broadcast by Aljazeera television network. He also urged sympathizers and supporters to block the peacekeepers in Sudan – possibly indicating the search for new fertile jihadist pastures as Iraq becomes more problematic.

Al Qaeda’s leadership considers the Iraq war the most important step since September 11 in establishing their long-awaited Islamic state in the heart of the Muslim world. Before the American-led invasion and occupation of Iraq, the global war had not been going well for bin Laden; not even the ummah, the worldwide Muslim community, supported his cause. Al Qaeda had suffered crippling military blows and, with the 2001 fall of the Taliban regime in Afghanistan, lost its refuge and political patron. Bluntly put, Al Qaeda was in a coma.

The war in Iraq revived Al Qaeda and provided the bin Laden network with a new cause, a second generation of recruits. Equally important, the American occupation of an Arab country in the heart of the Muslim world enabled Al Qaeda to make an ideological sales pitch to Muslims worldwide.

According to bin Laden, Iraq, seat of the historic Muslim caliphate, is the central battle of a Third World War, launched by the Crusader-Zionist coalition against the Muslim community: “The whole world is watching this war,” offering “a golden and unique opportunity” to bloody America and spread the conflict into neighboring Arab countries like Syria, Jordan, Lebanon, and the Palestinian-Israeli front.

Little wonder, then, that bin Laden and his lieutenants are alarmed at early signs of political progress bringing Shiite, Sunni and Kurdish leaders together to assemble a unity cabinet. Such a new political day would spell ruin for foreign militants like Al Qaeda; conceivably, Sunni Arabs would turn on the Zarqawi network. It’s happened already: In some towns, Sunni tribes killed scores of Zarqawi's men and chased others away.

President Jalal Talabani has reportedly met with representatives of seven armed Sunni groups and believes they could be persuaded to lay down their weapons – it remains to be seen if such a meeting produces any useful results in the short term.

Of course, Iraq remains in the midst of social, political and military upheaval. Iraqis remain deeply splintered over the future direction of their country. The sectarian divide has become deeper and wider, with increased sectarian killings on daily basis. There are alarming reports of steady flow and movement of Sunnis and Shiites from mixed communal areas to the safety of their own sects and tribes. But contrary to what may appear in daily reports, events are turning against Zarqawi and company.

The Zarqawi network has become a liability to Sunni tribes who suffer economically, feel marginalized politically, and resent being lumped together with Al Qaeda. They want to participate in political and economic reconstruction of the country and set their own agenda.

For example, Sunni leaders are engaged in intense political negotiations with their Shiite counterparts to give their community adequate and fair representation in the new cabinet being formed. Some leading Sunni leaders have also publicly distanced themselves from Al Qaeda in Iraq and called for its military defeat.

It is within this shifting political context in Iraq that the new media blitz by Al Qaeda must be understood. In his video Zarqawi warned Sunnis in and outside of Iraq that their community was in danger of being overwhelmed by “the Crusaders and the evil Rejectionists,” referring to Americans and Shiites, respectively. His words of inspiration might also be read as words of desperation: “God almighty has chosen you to conduct

holy war in your lands and has opened the doors of paradise to you.”

Zarqawi’s mentors, bin Laden and Zawahiri, echoed the same sentiment and appealed to Muslims over the heads of their rulers. Zawahiri, the most vocal spokesman for Al Qaeda, denounced the leaders of Iraq, Pakistan, Egypt, Saudi Arabia and Jordan as “traitors” and called on Muslims to rise up to “confront them.”

There is a pronounced urgency in the new propaganda blitz by Al Qaeda’s leaders. They sense danger in Iraq. By approaching the media, they hope to reaffirm their existence and inspire their sympathizers to continue the fight in Iraq and elsewhere. Although bin Laden and his men are waging a global struggle against the US and its allies, Iraq has emerged as the most pivotal theater. Al Qaeda barely survived the loss of its

Afghan base; the loss of Iraq could prove to be more devastating.

Fawaz A. Gerges is the author of the recently published “Journey of the Jihadist: Inside Muslim Militancy,” published by Harcourt Press in 2006. He holds the Christian Johnson Chair in Middle East and International Affairs at Sarah Lawrence College.