America and the World Into a New Era – Part I

The US and Europe – firm allies throughout the 20th century – now differ on many issues, global security in particular. This YaleGlobal series analyzes the European-American relationship and points to areas of fracture. In the first article, journalist and author Bruce Stokes describes the world’s expectations for the next US president and cautions that regardless of who wins the post-Bush honeymoon period could be short lived. Democratic nominee Barack Obama promises to rely on diplomacy more than military solutions while Republican John McCain, veteran and former prisoner of war, offers frequent reminders that all options are open in dealings with Iran or other troublespots. In some policy areas, such as increased NATO presence in Afghanistan, both men are more hawkish than Europe would prefer. In other areas, such as climate change, the views of both men align more with those of European than US voters. Unlike US voters who shrug about their country’s “profound image problem,” the next president must deal with global opinions in order to secure cooperation from allies and lead the world. – YaleGlobal

America and the World Into a New Era – Part I 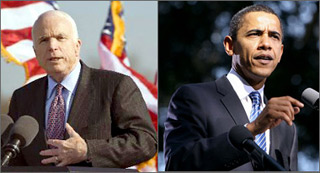 Global divide: Though different in their approaches, neither US

DENVER: The United States elects a president in two months. The whole world is watching because whoever is victorious November 4 will be the leader of not just of the US but the world. Africans, Asians, Europeans and Latin Americans – unhappy with the Bush administration’s eight years – all have a stake in the election’s outcome. But they’ll discover that whether Democrat Barack Obama or Republican John McCain is the next US president, his foreign policies may not often be in concert with global public opinion.

Obama is the overwhelming favorite of people outside the United States. But only Americans get to vote. And Republican John McCain stands a good chance of winning the election. Those abroad wishing to see an Obama presidency would do well to remember that the American people share many of McCain’s hawkish foreign policy views.

Sure, the next US president will enjoy a honeymoon of goodwill around the world because he is not George W. Bush. But whether Obama or McCain sits in the White House next year, that honeymoon could be short lived.

People outside the United States have exceedingly high expectations of the next American leader. In 14 of 23 countries surveyed recently by the Pew Global Attitudes Project, majorities or pluralities of the population expect the next US president to change American foreign policy for the better. Overwhelmingly, they suggest that Obama is more likely than McCain to do the right thing in world affairs.

But McCain only trailed Obama by a few percentage points in US public opinion surveys going in to the fall campaign. And because the United States elects a president state by state, not by popular vote, McCain stands a good chance of carrying enough individual American states to win the election.

Obama’s choice of Senator Joe Biden, the chairman of the Foreign Relations Committee in the US Senate, to be his vice president, demonstrated a desire to reassure voters, and the world, that an internationally experienced person would be one heartbeat away from the presidency.

McCain’s choice of relatively unknown Alaskan Governor Sarah Palin as his running mate, after having met her only twice, sent a different message. It suggested that the Republican candidate makes important decisions on impulse rather than through a deliberate decision-making process, a trait that may not bode well for future US foreign policymaking.

The recent confrontation between Russia and Georgia is a case in point. McCain was quick to condemn Russian actions in far harsher tones than Obama, who initially urged restraint. Both, however, have supported Georgian membership in NATO and have threatened to deny Russia membership in the World Trade Organization. McCain has gone even further, urging that Russia be kicked out of the G8. He also supports the Bush administration's plan to build missile-defense sites in Eastern Europe. McCain could be expected to be more confrontational than Obama in dealing with Moscow, an approach that’s out of step with Berlin, London and Paris.

McCain has also been one of the loudest cheerleaders for the Iraq war, which Obama opposed from the start. McCain claims victory in Iraq is his first priority. And two in five Americans agree that US efforts in Iraq will succeed. Half of the British, two-thirds of the French and nearly three-quarters of the Germans agree with Obama’s belief that the US effort in Iraq was doomed from the start.

Obama and McCain are equally bullish on the war in Afghanistan, where both want to bolster NATO’s presence. This stance has the support of the American people, half of whom believe that the Afghan war needs to be won at all costs. By comparison, global publics have no stomach for such an effort, suggesting both Obama and McCain would face opposition to escalating the war. In 21 of 23 countries Pew surveyed, a majority or plurality of those questioned said that US and NATO troops should be removed from Afghanistan as soon as possible. 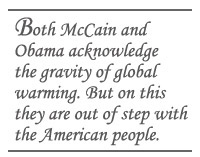 On Iran, McCain argues there is only one thing worse than a “military solution” with Tehran and that’s Iran having nuclear weapons, implying he would go to war if necessary to end the Iranian nuclear-weapons program. Obama argues for diplomatic engagement to defuse the confrontation. In this case, the American people support Obama not McCain. But two-thirds of Americans have an unfavorable view of Iran, suggesting they could support getting tough with Tehran if diplomacy fails.

Environmental issues promise to be another international headache for Obama or McCain. By a significant margin, publics in 13 of the 23 countries Pew surveyed name the United States as the world’s top polluter. To change this perception, the next US president must chart a new course, especially on climate change.

Both McCain and Obama, unlike Bush, acknowledge the gravity of global warming. But on this they are out of step with the American people. Only 42 percent of Americans think global warming is a very serious problem. By comparison, majorities in 14 of 23 Pew survey nations are extremely worried about climate change, including 92 percent of Brazilians, 73 percent of the Japanese and 66 percent of the Indians.

The economy will pose additional problems abroad for the next US president, especially McCain. He contends that economic prospects are good. In contrast, publics in 17 of 23 countries rate their economy as bad. Moreover, among those people who think that the US economy influences their economy, large portions – seven in ten in Britain, Germany and France – say such American influence is negative.

McCain and Obama also differ on trade. The Republican candidate is an unabashed free trader. The Democrat wants trade agreements to give greater protection to worker and environmental standards which may have the practical effect of crimping trade. And again, McCain seems out of step with trends in public opinion. The Americans’ support for trade has fallen 25 percentage points in the last six years, the most of any nation. But enthusiasm for trade has also eroded in Europe and parts of Asia and Latin America. 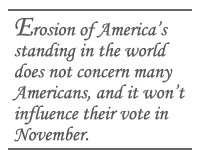 Like Bush, McCain’s instinct it to act unilaterally in dealing with international issues. To that end he has advocated creation of a League of Democracies, effectively a coalition of the willing, which some of his conservative supporters want to use to kill the United Nations. And McCain did recently vote to cut the US share of payments for UN peacekeeping operations. Obama, on the other hand, speaks openly of the need for multilateral approaches to problem solving.

Yet in his opposition to multilateralism, McCain has the support of the American people. When asked what country or organization should have responsibility for dealing with the world’s leading problem, whatever that issue might be, a plurality of Americans said the United States should go it alone. A plurality of the British, French, Germans and Chinese disagree, saying that the United Nations should take the lead.

The next US president will inherit a country with a profound image problem. Anti-American sentiment around the world is already far worse today than it was in 2000. And the disconnect between McCain and, on some issues, Obama and the publics around the world is only likely to worsen that problem. Yet this erosion of America’s standing in the world does not concern many Americans. And it will not influence their vote in November.

Bruce Stokes is the co-author of the book “America Against the World” published by Times Books.