Americans are Tuning Out the World

As the world becomes accustomed to the American way of life, Americans are tuning out the rest of the world. US citizens have paid less and less attention to foreign affairs since the 1970s, writes journalist Alkman Granitsas. The number of university students studying foreign languages has declined, and fewer Americans travel overseas than their counterparts in other developed countries. News coverage of foreign affairs has also decreased. Why are Americans withdrawing from the global village? A continuing immigration boom may be one factor; with millions of foreigners trying to get in, Americans may think the rest of the world has little to offer. In addition, a rising income gap between the US and most of the world’s population makes some Americans hesitant to travel overseas. Finally, economic prosperity leads many to pay less attention to politics, especially international affairs. With an increasingly uninformed electorate, can the world’s superpower be trusted to shape a responsible foreign policy? – YaleGlobal

Americans are Tuning Out the World

When the world comes to their shore, US citizens are increasingly less interested in foreign affairs
Alkman Granitsas
Thursday, November 24, 2005 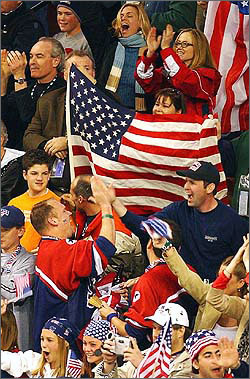 Disengaged at the top: Americans celebrate their preeminence, but care less and less about the rest of the world

ATHENS: For all the talk about a global village, there are actually two communities in the world today: Americans and everyone else. The average Frenchman, Brazilian, or Pakistani is becoming more attuned to the American way of life, but Americans themselves are increasingly tuning out the rest of the globe. At a time when US power, benefiting from globalization, is unchallenged in the world, a disinterested electorate could be a recipe for trouble.

Foreigners have long bemoaned the "isolationist" attitude of Americans – safely protected by two oceans and their tabula rasa history. But over the last several decades, that isolation has deepened. Americans now pay less attention to international affairs, and read less foreign news than at any time in the last two generations. Relative to the global boom in international travel, tourism, and business, fewer Americans go overseas or study a foreign language at university. The truth is that Americans are becoming relatively less – not more – engaged with the world in general.

A few facts. Since the early 1970s, the American public has paid less and less attention to foreign affairs. According to Gallup polls from presidential election years 1948 through 1972, Americans used to rank foreign affairs as the most important issue facing the nation. Since then, however, with the single exception of the 2004 elections, the economy has been ranked first.

It has long been known that fewer Americans have passports, and US citizens travel less than their counterparts in other developed economies. And while a record 21 percent of all Americans now have passports and are traveling more, the number going overseas in the past 20 years – not just to neighboring Canada and Mexico – has grown at a slower rate than the number of overseas visitors to America or the growth in international tourism in general. And indeed, during the late 1980s and early 1990s, the number of Americans even applying for a passport declined in several years.

American media coverage of foreign affairs has also been diminishing. For example, according to a 2004 Columbia University survey, the presence of foreign news stories in American newspapers has been dropping since the late 1980s. In 1987, overseas news accounted for about 27 percent of front page stories in American newspapers – about the same as a decade earlier. By 2003, foreign news accounted for just 21 percent of front page stories, while coverage of domestic affairs more than doubled over the same period. On television, both the number of American network news bureaus overseas and the amount of air-time spent on foreign news fell by half in the 1990s.

Consider first, that for the past 45 years, Americans have witnessed a massive immigration boom. Since 1960, more than 20 million immigrants have come to the United States – the greatest influx of newcomers in the last hundred years, surpassing even the wave of immigrants that arrived in the first three decades of the 20th Century. Two-thirds of these newcomers – more than 15 million – have come in just the past 25 years. 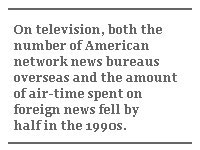 That they should come bears out the myth that America is a melting pot of peoples. Indeed, the iconic images of the first Plymouth Rock Pilgrims and the Ellis Island immigrants of the early 1900s, are at the very center of American popular mythology. More recently, news footage of Mexican-Americans rushing the fences on the southern borders shows that America attracts all comers.

And every single American – from the mid-western blue collar worker to the pedigreed New England blueblood – knows their forebears came from someplace else. Chances are they've met or know someone – the Bangladeshi working at the 7 Eleven, the Chinese scientist on TV, the Somali cab driver at the airport - who has come even more recently.

With the whole world apparently trying to get to America, the average American can only ask: why look to the rest of the world? After all, why would everyone try to come here if there was anything worthwhile over there? It is telling that according to a 2002 National Geographic survey, 30 percent of Americans believed the population of America to be between 1 and 2 billion people. For most Americans, it must seem like everyone is rushing the fences these days.

The second reason is that for much of the last two decades most (but not all) Americans have seen their economic well-being grow relative to the rest of the world. Through much of the 1990s, American consumer confidence and real disposable income have risen at their fastest levels since the relatively golden age of US economic growth of the 1960s. These have been matched by perceptions of increased wealth from a stock market rally that, with interruptions, lasted from the early 1980s until three years ago.

Why should that matter? Because since the days of ancient Rome, it is an axiom of political science that economic well-being dulls the appetite of citizens to participate in civil affairs. It is something that de Tocqueville observed more than a hundred years ago.

"There is, indeed, a most dangerous passage in the history of a democratic people," de Tocqueville observed. "When the taste for physical gratifications among them has grown more rapidly than their education and their experience of free institutions ... the discharge of political duties appears to them to be a troublesome impediment which diverts them from their occupations and business."

Long before 9/11, the Asian tsunami, SARS, the bird flu, and the relatively weaker dollar, Americans were already growing less interested in the rest of the world. Since then, they have found even more reasons to tune out.

The implications, however, are disturbing. Because of America's pre-eminent position in world affairs -and its role in "globalization," its foreign policy matters more than any other country on earth. But can America shape a responsible foreign policy with such an uninformed electorate? The world may be turning into a "global village," but the average American has moved to the suburbs.

Alkman Granitsas is an American journalist who has worked overseas in Asia and Europe for over 10 years. He is currently based in Athens.