US foreign policy is in chaos after the president impulsively withdrew US troops from northeast Syria and abandoned Kurdish allies who led the ground war against Islamic State extremists. Turkey then launched military operations against the minority ethnic group. That decision was made as an impeachment inquiry unfolds against Donald Trump – amid reports that he orchestrated a quiet pressure campaign, withholding military aid for Ukraine approved by Congress while urging that country’s president to announce an investigation on US Democrats. Trump’s moves in Syria and Ukraine both benefit Russia. “US actions in Ukraine and Syria have demoralized America’s friends and emboldened adversaries,” explain Atman Trivedi, managing director, and Santiago Herdoiza, research associate, both with Hills & Company, International Consultants. “The United States and the world are less safe as a result.” Repairing US credibility and restoring trust with allies and partners won’t be easy. Identifying threats and building coalitions will be more challenging, and uncertainty about US commitment will prompt nations to hedge by improving relations with Russia and China, or even seek nuclear weapons. Leaders and policymakers around the world must assess whether the Trump administration’s transactional foreign policy is an aberration or accurate reflection of American character. – YaleGlobal

After chaotic, impulsive policies in Ukraine and Syria, allies struggle to trust US commitment to the global order and human rights
Atman Trivedi and Santiago Herdoiza
Tuesday, October 29, 2019

WASHINGTON, DC: One moment in October captures a foreign policy in chaos: In Syria, two American F-15E warplanes bombed a military base, headquarters of the US campaign against ISIS, to keep longtime NATO ally Turkey from taking control.

The president’s decision to withdraw about 1,000 US troops from northern Syria to Iraq without notice or preparation and apparent attempts to coerce Ukraine, a young democracy under siege by Russia, for personal gain have shaken the confidence of US allies and partners during an uncertain era of geopolitical transition. US actions in Ukraine and Syria have demoralized America’s friends and emboldened adversaries. The United States and the world are less safe as a result.

The latest moves come on the heels of the White House denigrating democracies, confiding in dictators over diplomats, extorting allies and undermining international institutions. Mistreatment of Ukraine’s democratic government and Kurdish partners in Syria have delivered the coup de grâce for America’s international credibility.

Expect friends to reduce reliance on the United States further as they hedge their strategic bets. Many partners have limited capacity and choices and may find the available alternatives, such as China and Russia, to be more unpalatable. But let’s be clear, many allies now trust the United States less than at any time since World War II. The damage to the country’s image and reputation will be hard to repair.

Even before the recent events came to light, the administration’s foreign policy has been refracted through the prism of domestic politics to an unprecedented degree. The White House’s alleged efforts to leverage almost $400 million in military aid to Ukraine for dirt on a political rival reinforces this view.

Less than two decades removed from post-Soviet independence, Ukraine struggles to manage internal divisions and build democracy. In 2014, Russia seized Crimea, an autonomous republic of Ukraine, and its historic meddling continues unabated. Conditioning security assistance under these circumstances to influence a presidential election would constitute an epic shakedown.

Congress’s decision to launch an impeachment inquiry into the president’s actions is draining time and attention of the White House, Congress, the State Department and other parts of the government. As the process drags into 2020, Washington will have little time to focus on alliance management. Fine points generally fall to dedicated public servants, but leaders set the strategic direction. Without leadership, friendships drift apart. Thorny issues cannot be delegated to mid-level managers. Yet, the president’s inner circle lacks the bandwidth to help resolve, for instance, the dispute between US allies Japan and South Korea.

Impeachment inserts a new gratuitous element of unpredictability that factors into the calculations of US friends. If the president’s decision in Syria is instructive, allies will gird themselves for a leader whose gut tells him to turn the country inward when under pressure.

President Donald Trump explained his decision to abandon Kurdish allies who helped take back northern Syria from ISIS fighters by reminding that he campaigned in 2016 on ending “endless wars.” In Trump’s worldview, national interests are narrowly-defined and often conflated with his personal interests, values are largely irrelevant, and much of what happens outside US borders are other people’s problems. 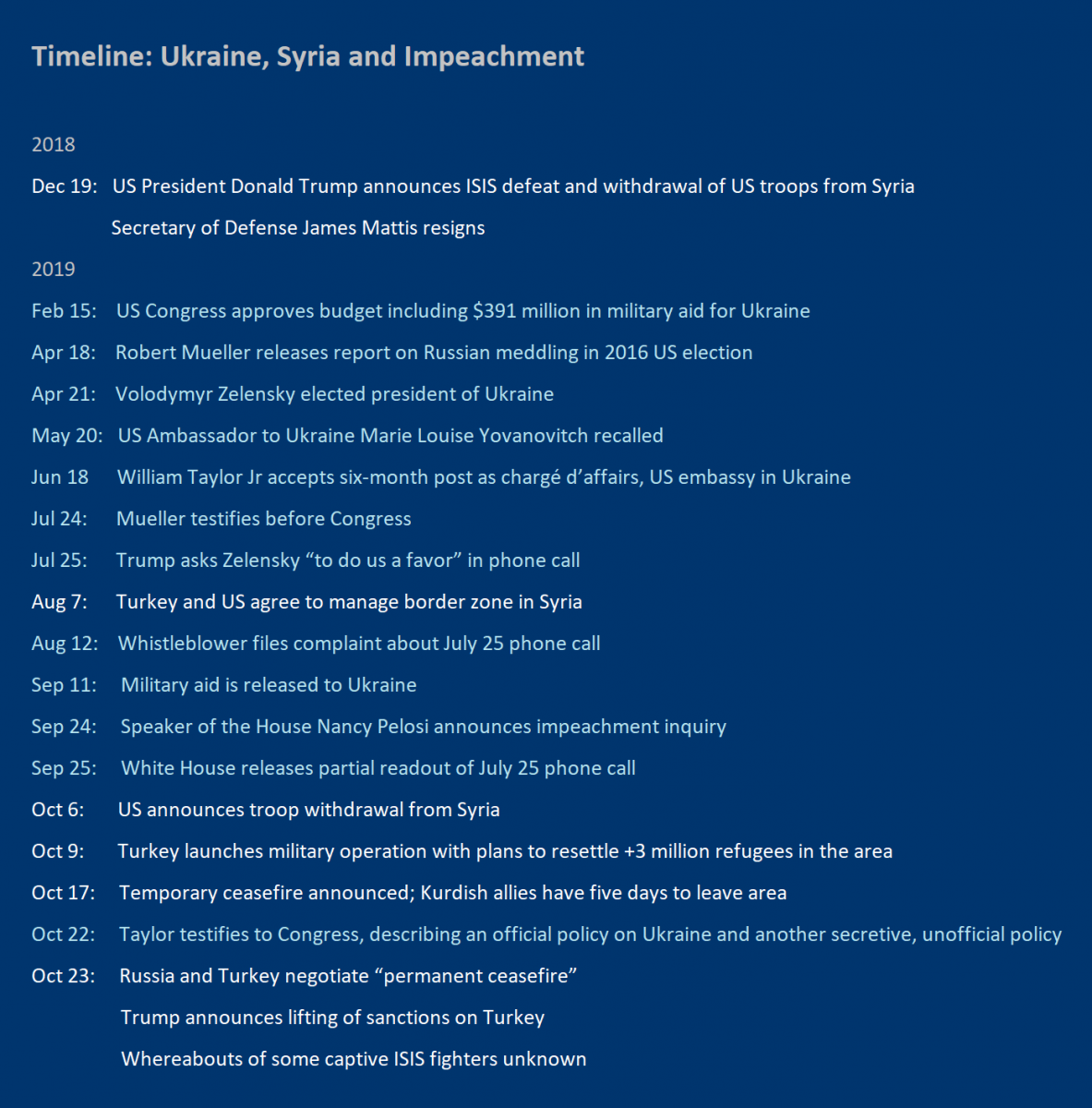 Initially slow to grasp the rapidity of the disaster he had wrought in Syria, the president defiantly tweeted, “I hope they all do great, we are 7,000 miles away!” Over 18 years after the 9/11 terrorist attacks, Trump was oblivious to the emerging security vacuum and the risk that America’s enemies could once again use favorable conditions to bring the fight to its doorstep.

The abrupt decision led to the predictable collapse of a delicate truce in Northern Syria. Turkey’s ensuing assault on the Kurds has claimed as many as hundreds of lives and left at least 176,000 people homeless. Absent a small tripwire US presence to keep the peace, Kurdish fears of Turkish ethnic cleansing cannot be ruled out. More than 100 ISIS fighters detained by the Kurds escaped, their whereabouts unknown; the Islamic State’s ability to reconstitute itself amid the tumult has grown. Left with no choice, the Kurds first turned to Bashar al-Assad, Syria’s brutal dictator, and Russia to save them from slaughter. Then they watched helplessly as Russia and Turkey carved up the border region. Syria’s other ally, America’s long-time adversary Iran, will also benefit from the precipitous US withdrawal.

Roughly 11,000 Kurds died in combat to destroy ISIS’s “caliphate.” Partners will think twice about fighting terrorists if it means being left exposed as Uncle Sam slips out the backdoor. Some stakeholders could reach the same conclusion as Iraq’s former national security adviser Mowaffak al-Rubaie: “For the Americans, their friends are disposable.”

The “leader of the free world” cannot impulsively betray an ally in such a volatile region without global repercussions. Syria’s agony has produced refugee flows roiling the politics of leading European democracies. Tensions within Europe and NATO grow. Turkey’s attack in northern Syria intitially led to US sanctions and European countries have suspended  arms sales to the ally. In Afghanistan, the Kabul government knows it could be blindsided next by a US exit – and so do the Taliban. Elsewhere in Asia, Taiwan’s future has grown more uncertain, and Hong Kong’s young protesters may feel more alone than ever.

Those searching for a silver lining may find it in the bipartisan condemnation of the White House’s conduct in Syria and congressional leadership’s efforts to reassure allies from Jordan to Afghanistan. Trump still operates under constraints. Intense criticism from the president’s own party over self-dealing led him to revisit using his own hotel to host the 2020 G-7 summit. In the near-term, France, Germany and Japan will also participate in damage control. Of course, these guardians of a rules-based order are not immune from populist temptations, nor can they afford to back blindly a US government that dismisses pan-European institutions and threatens security ties to extract short-term economic benefits.

Some likeminded friends might see American isolationism as a reason to join in defending international principles, as suggested for Asia earlier in Trump’s tenure. Big trade deals are getting inked, just not with the United States. Democracies such as Australia and India, for example, may enhance cooperation to counter a more powerful China. In the South China Sea, as Beijing asserts itself, European and Asia-Pacific democracies have conducted joint patrols in defense of the global norm of freedom of navigation.

Yet, even if the differences that complicate collective action were finessed, virtually no configuration of democracies would be a sufficient substitute for engaged American leadership. The country’s military and economic strength is still unmatched, and it plays a unique convening role. Forming international coalitions to protect well-established norms will be harder, especially given that this administration often works to erode them.

As doubts grow about US commitment to treaty allies, some countries will invest more in their militaries or make temporary friendships with strange bedfellows. In the president’s Hobbesian world where power trumps principle, a nationalist government in Turkey or a future conservative one in South Korea may conclude they can no longer depend on the US security umbrella and must take steps toward developing a nuclear bomb Others will place a renewed premium on keeping options flexible, selectively partnering when national interests happen to align in a more multipolar world. India’s new government appears headed in this direction, sending Washington signals it will cooperate with China, Europe, Japan, Russia and others when it suits New Delhi to do so.

The hedging will also take the form of a more pragmatic engagement of China and Russia. Even a nationalist Japanese government firmly anchored in the US alliance system has taken noticeable steps to improve ties with Beijing. Meanwhile, France has thawed relations, while Germany is growing economic ties, with Russia. If the United States continues to retreat, Beijing’s and Moscow’s influence in their neighborhoods will grow and be wielded with greater aplomb. Already, Russia and China are taking advantage in Syria and Afghanistan, respectively. Described as revisionist powers in the 2017 National Security Strategy, the pair are poised to be the big winners of the Trump era.

America is learning the limits of its global influence under this president. Few have acceded to US demands to cut ties with Chinese telecommunications behemoth Huawei over security concerns. From trade to climate change to Iran, America First is increasingly America Alone.

What must give US partners pause are growing questions over whether the president represents a post–World War II aberration in foreign policy or a broader trend of US disengagement. In 2016, the president wagered a sizeable number of Americans were exhausted by the responsibilities of global leadership said to be foisted on them by Beltway elites. He now doubles down on that bet.

In some ways, Trump is not alone in his preference for retrenchment. Democratic presidential candidates find evident faults with the president’s foreign policy, tone, decision-making and implementation. But several leading contenders share his concerns about the US role in the Middle East and elsewhere. Some are committed to an unconditional troop withdrawal in Afghanistan within a year of becoming president.

There is a growing bipartisan recognition that life after Trump may not mean a return to business as usual. That could be healthy if the parties can forge a consensus around engaged US leadership in the world focused on diplomacy, alliances and the power of the country’s example as key pillars. Relying on more than just military strength – and using it wisely – would save US lives and money to devote to national rejuvenation.

America’s partners will be watching the impeachment process and presidential elections for clues to see if the principal architect of today’s international system is intent on further unraveling. But they aren’t waiting to see if Trump’s brand of diplomacy is a passing phase. Restoring US allies’ lost trust will be central to securing a safer, more prosperous world. That process will take a number of years, if not decades or more, and will test anew America’s remarkable capacity for self-renewal.

Atman Trivedi is a managing director at Hills & Company, International Consultants and an adjunct fellow at the Pacific Forum.  He worked at the US State and Commerce Departments and on the Senate Foreign Relations Committee.  Santiago Herdoiza is a research associate at the same firm.  These views are their own.

Asian Regional Order – US Allies to the Rescue

US Whistleblower’s Complaint on Trump