For more than a decade, the US was a lone superpower in terms of economic, diplomatic and military might. But China has steadily stepped up to the challenge, demonstrating its intent to serve as a counterweight to US influence when it comes to global affairs. In the first of this series of articles about challenges to US-China relations, Joan Johnson-Freese, chair of the US Naval War College’s National Security Decision Making Department, analyzes the specter of an arms race in space thrown up by China’s recent destruction of a weather satellite. China was irresponsible in shooting down its own satellite, creating debris that can cause potential damage to other satellites for years to come, argues Johnson-Freese. But the move also demonstrated the vulnerability of any satellite and China’s firm intention to counter US control of space. Johnson-Freese urges both China and the US to renew cooperation on global matters and not engage in pointless bravado or a wasteful race to weaponize space. – YaleGlobal

The Chinese anti-satellite weapon test is a challenge, but the US would be better off not overreacting
Joan Johnson-Freese
Tuesday, February 6, 2007 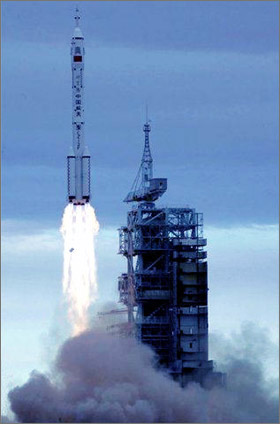 A dangerous game: Chinese launch a manned flight, but their anti-satellite weapon test could ignite an arms race

that would jeopardize all assets in space

NEWPORT: With their recent successful anti-satellite weapons test, the Chinese destroyed not only a satellite, but also demolished the myth that a new space arms race is not looming. That myth was most recently promulgated in statements by US administration officials who, in explaining the 2006 US National Space Policy, argued that space arms-control agreements are not needed because there is no arms race in space, nor is one likely to emerge. Rarely are such myths destroyed in so clear, unambiguous and unfortunate ways. But the Chinese demonstration that a space arms race is alive and well does not mean the US has to jump in.

With its foolhardy test, China may have removed any incentive for the US to show reluctance about its own anti-satellite weapons (ASAT) programs. Since the 1980s, American officials have observed a kind of taboo on admitting to ASAT capabilities. Now, there could well be pressure for America to admit to and strut a similar capability in order to overcome specious arguments that somehow the US has been “overtaken in space.” The Chinese will almost certainly react with similar vows that they will not allow space to become the 51st American state, and in no time both nations will be off to the space races.

In its defense, China will likely claim that American policy is hypocritical on the question of weaponizing space. While there may be some truth to that, nothing excuses the irresponsible stunt they pulled last month. However, it is important to consider whether US policy provides inadvertent support to hardline Chinese generals.

American missile-defense programs also fuel arguments in China and elsewhere that the US is looking to weaponize space. Missile defense, often described as hitting a bullet with a bullet, may eventually work, given enough time and money. But it is certainly easier to destroy a bright, shiny satellite traveling in a predictable orbit around Earth than to knock down a tiny, fast moving warhead. This has led some countries, including China, to suspect that the US national missile-defense program is actually an offensive program. Between missile defense and the NSP language, it is not hard to see how the US could be viewed as being on the fast track to building space weapons.

There are two possible explanations for why China, after years of being a leading advocate for a space-weapons treaty, would choose to demonstrate an ASAT capability now: 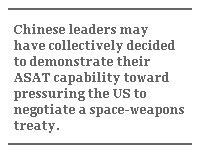 First, it’s possible that Chinese leaders may have collectively decided to demonstrate their ASAT capability toward pressuring the US to negotiate a space-weapons treaty. If this was the intent, the Chinese may have miscalculated. With one ill-conceived launch, the Chinese have provided hardliners in the US – who are looking for a new Cold War to fill the void left by the Soviet collapse – with all the ammunition they need to declare China the next threat to the US, and space-weapons advocates with all the evidence they need to move forward on the celestial front.

It is also possible that the Chinese leadership was not unanimous on this decision. The world was left to wait for almost two weeks before an official statement confirming the test was released by the Foreign Ministry in Beijing. It’s possible the military undertook the test without providing details to the Foreign Ministry so as to allow Chinese diplomats a certain plausible deniability about the whole business. 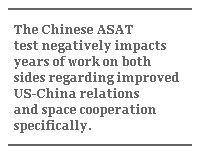 If that is the case, the ASAT launch was primarily a chest-thumping demonstration of technical prowess choreographed by the 2nd Artillery. Apparently the Chinese military couldn’t resist proving the relative vulnerability of space technology. Using a ground-launched missile carrying a kill-vehicle that slammed into the satellite is a method strikingly similar to US national missile-defense technology, thus perhaps intending to show that Americans are being disingenuous in their claims about the non-offensive nature of missile defenses.

The Chinese have not leapfrogged US technology in any way. Chinese capabilities so far are limited to low-Earth orbit, and the ASAT test was thus more a limited technological demonstration than evidence of operational readiness. Also, China has demonstrated a threat capability, but not intent.

The Chinese ASAT test negatively impacts years of work on both sides to improve US-China relations generally and potential US-China space cooperation specifically. That cooperation, from the American perspective, only recently became even imaginable, as signaled by NASA Administrator Michael Griffin’s trip to China last September.

Hopefully, the Chinese test will trigger the kind of debate in the US that has long been needed over the desirability of developing and deploying space weapons. Certainly the US can take away one important lesson from China’s irresponsible actions: There are limits to the technological ability to protect valuable space assets.

So, rather than succumbing to the temptation of matching one demonstration of saber-rattling with another, the US needs to diversify its options for dealing with space threats rather than only expanding technological efforts. 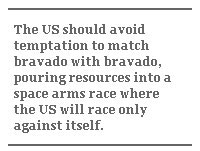 Additionally, arms control should be included in the US policy mix of tools for protecting space assets. Because 95 percent of space technology is dual use, space arms-control treaties have been traditionally dismissed as nonviable because of the ease with which countries can “cheat.” However, “rules of the road” for space operations and threat identification, much as the US has for other areas of military operation, would be a first step toward regulations that support US security goals. And Chinese ASAT technology, barebones now, could improve with further testing. That should be a clarion call for the US to support a ban on destructive ASAT testing. Overall, the US should avoid the temptation to match bravado with bravado by pouring resources into a space arms race where the US will be racing only against itself.

Only recently has meaningful dialogue with the Chinese space communities commenced. That dialogue must continue and it should not be viewed as a reward to the Chinese, even in the face of irresponsible actions, but rather an opportunity for the US to influence their future actions and learn about intents.

The Chinese, for their part, should realize that the primary impact of their ASAT test is to have shot themselves in the foot diplomatically. They need to renounce any further such provocations and reaffirm their commitment to the peaceful uses of space. They need to resist attempts to excuse their actions as mere reactions to US space policies and programs. They need to take responsibility for the fact that their ASAT test will inflame military competition in space, and this should be followed by China increasing the kind of transparency that has long been called for regarding their secretive space programs. Otherwise, the credibility and capital that China has carefully nurtured as a nation developing into a responsible member of the international community over recent years will be squandered, to the detriment of all.

Joan Johnson-Freese is chair of the National Security Decision Making Department at the US Naval War College and the author of “Space as a Strategic Asset,” Columbia University Press, forthcoming March 2007. The views expressed in this article are the author’s alone and do not represent the official position of the Department of the Navy, the Department of Defense or the US government. The essay is adapted from her remarks recently made before the US-China Working Group in the US Congress.