The Pew Global Attitudes Project has released results of its annual global public-opinion polls for 2006, and results show increasingly negative views toward the US. For its most recent release, the project conducted 16,710 interviews in 15 countries. The most significant reason for the slip in US popularity, in most cases, is the conflict in Iraq. Many respondents ranked this conflict – along with the current governments of Iran and North Korea and the Palestinian-Israeli conflict – as a “great danger” to world peace. The US and its allies do agree about opposing Iran’s development of nuclear weapon, while citizens of Muslim nations reported mixed opinions. The survey reveals intense awareness about avian flu, while concern about global warming is mixed – ranging from 19 and 20 percent reporting great concern in the US and China, respectively, to 66 percent in Japan and 65 percent in India. The US war on terror draws majority support from two countries – Russia and India. Finally, the survey reveals a global malaise regarding citizen satisfaction with conditions in their respective nations. Only in China did the survey show a majority of citizens reporting increased satisfaction, 81 percent, up from 72 percent in 2005. – YaleGlobal 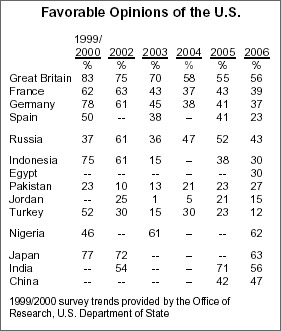 America's global image has again slipped and support for the war on terrorism has declined even among close U.S. allies like Japan. The war in Iraq is a continuing drag on opinions of the United States, not only in predominantly Muslim countries but in Europe and Asia as well. And despite growing concern over Iran's nuclear ambitions, the U.S. presence in Iraq is cited at least as often as Iran - and in many countries much more often - as a danger to world peace.

A year ago, anti-Americanism had shown some signs of abating, in part because of the positive feelings generated by U.S. aid for tsunami victims in Indonesia and elsewhere. But favorable opinions of the United States have fallen in most of the 15 countries surveyed. Only about a quarter of the Spanish public (23%) expresses positive views of the U.S., down from 41% last year; America's image also has declined significantly in India (from 71% to 56%) and Indonesia (from 38% to 30%).

Yet the survey shows that Americans and the publics of major U.S. allies share common concerns, not only over the possible nuclear threat posed by Iran but also over the recent victory by the Hamas Party in Palestinian elections. In contrast, the predominantly Muslim populations surveyed generally are less worried about both of these developments. 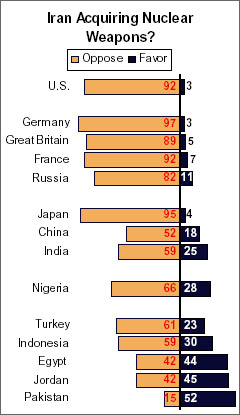 Nearly half of Americans (46%) view the current government in Iran as a "great danger" to stability in the Middle East and to world peace, up from 26% in 2003. Concern over Iran also has risen sharply in Western Europe, especially Germany. Currently 51% of Germans see Iran as a great danger to world peace, compared with just 18% three years ago.

Opposition to Iran developing nuclear weapons is nearly unanimous in Germany, Japan, France, and Great Britain, as well as in the U.S. Opinion in predominantly Muslim countries varies widely: solid majorities in Turkey (61%) and Indonesia (59%) oppose Iran acquiring nuclear weapons, but people in Egypt and Jordan are divided, and most Pakistanis (52%) favor Iran acquiring nuclear weapons. In addition, more people in major industrialized nations than in Muslim countries believe that Iran wants a nuclear program to develop weapons, not nuclear energy.

Divisions between the West and Muslim nations in opinions of the Hamas Party's victory are even wider. Fully 71% of Germans and 69% of the French feel the Hamas triumph will be bad for the Palestinian people, among those who are aware of the issue. Somewhat fewer Americans (50%) express this view, although just 20% think the Hamas triumph will be a good thing for the Palestinians. Among major U.S. allies, only the British are divided on Hamas' election - 34% say it will be bad, while 32% take a positive view. 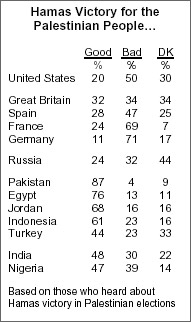 By contrast, large majorities in Pakistan (87%), Egypt (76%), Jordan (68%), and Indonesia (61%) feel that the Hamas Party victory will be good for the Palestinian people, among those who had heard about the election. In addition, the Muslim publics surveyed generally feel the Hamas triumph will increase chances of a fair settlement of the Mideast conflict - a view that is roundly rejected in the West.

The latest survey by the Pew Global Attitudes Project, conducted among nearly 17,000 people in the United States and 14 other nations from March 31-May 14, finds that the U.S.-led war on terror draws majority support in just two countries - India and Russia. In India, support for the U.S.-led war on terror has increased significantly over the past year - from 52% to 65% - even though opinions of the U.S. have grown more negative over that period.

But in most other countries, support for the war on terror is either flat or has declined. In Japan, barely a quarter of respondents (26%) now favor the U.S.-led war on terror, down from 61% in the summer of 2002. Only about four-in-ten Indonesians (39%) back the war on terror, compared with 50% a year ago. And in Spain, the site of a devastating terrorist attack two years ago, four times as many people oppose the war on terror as support it (76% vs. 19%). 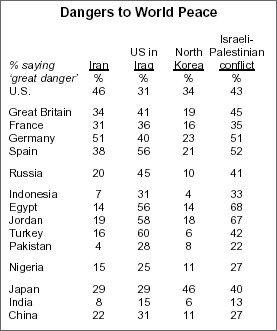 The survey finds sizable gaps in public attentiveness to major issues and events. In this regard, the extraordinarily high level of attentiveness to bird flu disease is significant. More than 90% of the publics in 14 of 15 countries polled say they have heard of the disease; the only exception is Pakistan, where 82% say they are aware of the disease.

Reports about U.S. prison abuses at Abu Ghraib and Guantanamo have attracted broad attention in Western Europe and Japan - more attention, in fact, than in the United States. Roughly three-quarters of Americans (76%) say they have heard of the prison abuses, compared with about 90% or more in the four Western European countries and Japan. 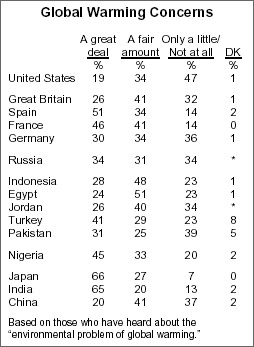 Among predominantly Muslim countries, large majorities in Egypt (80%), Jordan (79%), and Turkey (68%) say they have heard of the reports of prison abuse. But in Indonesia, Pakistan, and among Muslims in Nigeria, most people have not heard of this issue. Moreover, just 38% of Chinese and 23% of Indians say they are aware of the prison abuse story.

While there is extensive interest in bird flu, public alarm over the spread of the disease has been mostly limited to Asia. Nearly two-thirds of Indonesians (65%) say they are very worried that they themselves or a family member will be exposed to the bird flu; bird flu worries also are extensive in India (57% very worried), Nigeria (57%), and Russia (56%). But the disease has generated far less concern in Western Europe and the United States. Only about one-in-ten Americans (13%) say they are very worried about the bird flu; similar levels of concern are evident in France (13%), Germany (10%), and Great Britain (9%). 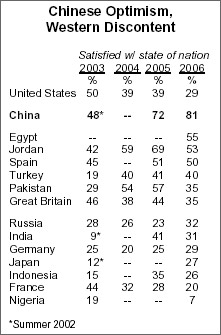 But there is no evidence of alarm over global warming in either the United States or China - the two largest producers of greenhouse gases. Just 19% of Americans and 20% of the Chinese who have heard of the issue say they worry a lot about global warming - the lowest percentages in the 15 countries surveyed. Moreover, nearly half of Americans (47%) and somewhat fewer Chinese (37%) express little or no concern about the problem.

Only about three-in-ten Americans (29%) say they are satisfied with the way things are going in the U.S., down from 39% last year and 50% in 2003. Levels of national satisfaction in France have followed a similar downward trajectory - from 44% in 2003 to just 20% today. Public discontent is even higher in Nigeria, which has been wracked by internal strife. Just 7% of Nigerians have a positive view of the state of the nation, compared with 93% who express a negative opinion.

There has been a marked change in views of the Middle East conflict in both Germany and France. In both countries, increasing numbers sympathize with Israel; Germans now side with Israel over the Palestinians by about two-to-one (37%-18%).

German Chancellor Angela Merkel is enormously popular in France as well as in Germany. Fully 80% of the French express at least some confidence in Merkel.

Positive views of the American people - along with the U.S. - have declined in Spain. Just 37% of the Spanish feel favorably toward Americans, down from 55% last year.

Turks are increasingly turning away from the war on terror. More than three-quarters of Turks (77%) oppose the U.S.-led war on terror, up from 56% in 2004.

Negative views of France have increased over the past year, especially in Muslim countries. In Turkey, 61% feel unfavorably toward France, up from 51% last year.

About the Pew Global Attitudes Project

Since its inception in 2001, the project has released 13 major reports, as well as numerous commentaries and other releases, on topics including attitudes towards the U.S. and American foreign policy, globalization, democratization, and terrorism.

Following each release, the project also produces a series of in-depth analyses on specific topics covered in the survey, which will be found at pewglobal.org. The data are also made available on our website within two years of publication.