Americans tend to take contributions from foreigners for granted. But with the post- 9/11 obsession with security, the attitude is changing, leading to visa restrictions and worry about business deals that in the past raised nary a concern. In a two-part series, YaleGlobal examines the implication of this extra concern about security on US economic prosperity. Recently the announcement about a Middle Eastern company’s plan to manage some US port terminals and stevedoring operations has shocked the American public. US leaders have failed to explain how they balance business interests with national security concerns, and Americans are anxious about both, after abruptly discovering that it does not have the best, biggest, most efficient or secure port management operations in the world. In the first of this series, globalization scholar S.L. Bachman analyzes the low morale in the US and Americans’ mixed feelings toward globalization. She recommends that US politicians be upfront with voters about the nation’s reliance on investors, workers and companies from other countries – and not use them as scapegoats for problems internal to the US, including record-high personal and public debt, unrealistic education choices, and hyper-spending on security and defense. US politicians and voters must review the balance of security and business interests, address real internal problems, and assure the world of its fair and open-door policy to business. – YaleGlobal

Shaken by the extent of foreign role in the US, politicians raise questions that go to the heart of globalization
S.L. Bachman
Thursday, March 9, 2006 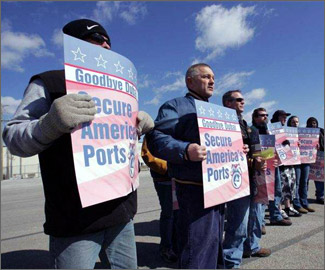 Stopping barbarians at the gate: Severing Dubai Ports World deal may be easy, but not the other tentacles of globalization. (Photo: The News Journal/Robert Craig)

SAN FRANCISCO: A political row over a Middle Eastern company’s plan to manage terminals and stevedoring operations at US ports spotlights a dilemma hidden from the public view: how to ensure the country’s security when its economic prosperity depends on total openness to global business. A House Appropriations Committee vote against the president over port security raises doubt over the continuity of the US open-door policy for foreign investors.

News surfaced in February that contracts to run terminal operations at six major US seaports would be transferred from a British company to one owned by the government of Dubai, one of the United Arab Emirates with an imperfect record on fighting terrorism.

The surprise hit nerves linked to national security and economic security. Add election year partisanship, and the result is a national headache that keeps getting worse.

Americans need leadership that clearly defines where global business ends and national security begins, and how to balance both. To keep the US economy moving as an engine of globalization, the rest of the world needs US leaders to strike a wise balance between business and security.

Americans question their political representatives in letters and telephone calls, blogs and national polls. They can’t tell whether the current leadership knows where global business ends and national security begins.

The rest of the world may wonder why Americans are so upset. After all, companies from outside the US operate terminals in the vast majority of US ports.

And yet, ever since 9/11, Americans have seen in globalization both an appealing business face and a threatening terrorist shadow.

Airplanes that bring millions of tourists and a cornucopia of goods to America’s shores also became deadly missiles in the hands of terrorists on 9/11.

Immigrant students fill US universities and generate disproportionately high numbers of new Silicon Valley businesses. But among the ranks of student immigrants were the terrorists who studied how to fly planes.

Americans might have welcomed the ports deal with less alarm if they understood how their own economy has become inextricably intertwined with the global economy. The ports issue has come at a time when many Americans, seeing factories and jobs moving off-shore, worry about whether the global economy helps or hurts them.

Sure, another year is underway in a record run of import consumption. But record household debt has underwritten consumption of those imports. Imports from low-wage countries, in turn, have eliminated many manufacturing jobs.

Even American cars, once the nation’s pride, are lagging. While the port debate has raged, an influential magazine published a list of the 10 best cars. All were Japanese.

Outsourcing of services, meanwhile, has taken a toll on white-collar jobs as back-office customer relations, accounting, X-ray interpretation, and even tax preparation move to lower wage countries. More worrisome, outsourcing is moving up the skill ladder, from computer software programming to research and development and design.

National incomes show the dampening effect of these developments. US census figures from last year report that median household income was “unchanged in real terms” from 2002 to 2004. In that year, half of American households made more and half made less than $44,389. The poverty rate rose for four consecutive years from 2001-2004.

To some Americans, it seems as if their own leaders are trading the country away.

If the basic operations of American ports cannot stay in American hands, many Americans reason, what is next?

Worse, US ports are little more secure than on 9/11. About 6 percent of the 6 million marine shipping containers coming through 361 US ports are physically screened for weapons or weapons materials – compared to 100 percent of airline passengers.

President Bush is scrambling to explain what has not been traded away.

He stumbled by first insisting that Americans should let global business affairs as usual proceed, and then accusing Americans of xenophobia for worrying more about ports being operated by a company from the Middle East than one from Britain. Coming at a time of flat earnings by a majority of American people, anxiety over the future and war in the Middle East, his words could not have been worse timed.

And yet, Bush is right on the merits of the ports case. Americans need foreign investment to create jobs, foreign companies to bring the most competitive services to the US market, and foreign investors willing to purchase US Treasury bills to pay for all those imports reflected in the huge US trade surplus.

Foreign investors will be discouraged if Americans single out foreign investors for unusual security investigations for what seem like partisan reasons. This year, an Arab operator of seaport terminals hits the headlines. Last year, it was a Chinese government-owned oil company bid for US-owned Unocal. A dozen years ago, headlines featured Japanese companies that were buying landmark US real estate.

Politicians are loath to tell the public about economic interdependence for fear of appearing unpatriotic or weak on defense.

President Bush finally realized that he needed to show Americans he understands where business ends and security begins. US authorities are now conducting the 45-day review of security issues raised by Dubai Ports World's takeover of Peninsular & Oriental Steam Navigation Co. or P&O.

To succeed, the review must do more than go through the motions. It should address the real issues of port security that have made this debate more than the usual election year flap. Several compromise suggestions already have been floated to balance the need for security against the business needs of a global just-in-time production chain. DP World, as it is known, has offered to transfer the sensitive US port operations to a US-owned entity. Adopting one of these compromises would be the best way for President Bush to beat back a revolt among his fellow Republicans. A vote on the Senate floor might now follow the sentiment of the lower house, which was reflected in the committee vote Wednesday night to block DP World from operating any US seaport terminals. One third of senators and all House members, unlike the president, face an election later this year and members of both parties are trying to outshine their rivals on national security.

The Bush administration should also use the review period to assure the rest of the world that other foreign investments in the US market will not run afoul of political partisanship or xenophobia. Some Congress members are proposing more stringent reviews of all foreign investors. Bush should propose conducting security reviews across the board, so that Arab investors are not singled out.

To quell this political firestorm, Americans must begin honest debate about finding a better balance between security and business.

S.L. Bachman is the author of “Globalization in the San Francisco Bay Area,” published by the Pacific Council on International Policy (www.pcip.org). Her email is sarahbach@aol.com.