Argentina Stuck on the Periphery of a Globalized World

Although once renowned for its prosperity and rich culture, Argentina has seen its fortunes decline as it suffered authoritarian rulers throughout the 20th century. Democratic strides in the 1980s and 1990s did not bring success, either - the "liberal" leaders of those two decades implemented free-market policies that many blame for Argentina's current economic woes. Yet responsibility for Argentina's problems lies more with its corrupt politicians than with economic liberalization policies, writes Jean-Pierre Lehmann, founding director of the Evian Group. When former president Carlos Menem privatized large sectors of the economy, it was the elites with foreign bank accounts who grew wealthy as the Argentine peso collapsed. The enrichment of Menem's associates wiped out the emerging middle class and caused many educated Argentines to look for opportunities elsewhere. Now, more and more Argentines avoid paying taxes, so distrustful are they of their own government, and the resulting lack of revenue is causing even greater economic and political stress. Ultimately, Lehmann says, "Argentina should not be an example of what is wrong with globalization. It should rather be an example of the importance of a properly functioning society and a strong government." Without these, no amount of macroeconomic tinkering will bring prosperity to Argentina. - YaleGlobal

Argentina Stuck on the Periphery of a Globalized World

A corrupt and selfish elite has squandered the country's chance to shine
Jean-Pierre Lehmann
Friday, February 20, 2004 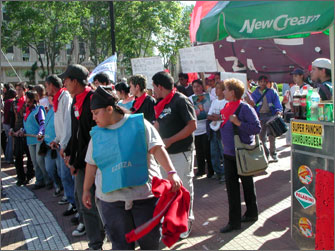 BUENOS AIRES: One cannot help but be impressed by Buenos Aires when looking at its futuristic 21st century business district or magnificent early 20th century Opera House, which has acoustics second only to La Scala. Yet Argentina's elegant capital, the most European of the world's non-European metropolises, belies a dismal failure. Many contend that Argentina is the latest victim of globalization, that its currently poor economic situation is the direct result of the recent financial crisis. But Argentina's failure lies far more in its weak polity and flawed society.

Named after its fabulous silver (argent) deposits, Argentina glowed and glittered a century ago, when it was among the world's richest countries. Over subsequent decades, however, it has declined precipitously, subject to a chronically manic-depressive economy. The country's boom and bust cycle is perhaps responsible for its dubious distinction of having the world's highest proportion of psychoanalysts per capita. The main cause of Argentina's depressingly persistent travails can well be illustrated from a large graffito on the wall of a street in Buenos Aires that reads: "las putas al poder !!! (sus hijos ja están en el)", which translates as "put whores in power!!! (their sons are already there)".

Politics is not the strong suit of many countries, but Argentina, in spite of its well-educated population, has been especially badly served. Start a conversation anywhere with virtually anyone and a lament about the country's politicians almost invariably arises. First there is Juan and Eva Perón, the "architects" of the modern Argentine state, who established a dictatorship that lasted from 1946 to 1955 - interrupted by Evita's death in 1952 - and which was re-established again in 1973. 'Peronism', authoritarianism that is ideologically buttressed by populist nationalism and close ties to the military, has dominated Argentine political life, occasionally replaced by outright military dictatorship. The last brutal military junta was commanded by Jorge Rafaél Videla, imposed in 1976 and ejected in 1982 following the country's humiliating defeat in the Falklands/Malvinas. That defeat destroyed the legitimacy of military power and ushered in the restoration of democracy.

Democracy has been far from an unbridled success in Argentina, however, with disappointments only made worse by occasional high expectations. It has been further undermined by the country's endemic lack of competent macroeconomic management; inflation appears to be a national economic disease. The election of Raúl Alfonsín in 1983, a liberal with a reputation for integrity, brought much hope to the nation that was followed by bitter disappointment. Near the end of his presidency, all macroeconomic hell broke loose. Inflation rose to over 380 percent, and the national currency declined precipitously in value against the US dollar, forcing Alfonsín to resign before his term was up.

Alfonsín was succeeded by an apparently hard-line Peronist, Carlos Saúl Menem. Once in power, however, Menem implemented policies that stood in diametric opposition to Peronist economic orthodoxy of nationalism and protectionism. Menem's conversion to some of the key tenets of the "Washington Consensus" - trade and financial markets liberalization, deregulation, promotion of inward foreign direct investment, and privatization - launched Argentina on a path of intensive economic globalization.

While militarism may have lost all legitimacy after the Falklands war, liberalism's claim to legitimacy was dramatically undermined, even possibly destroyed, by the country's economic collapse in 2001. The scandal-prone politics during the Menem era (1989-1999) did not help the democratic era's reputation. Some of the more high-profile corruption scandals have included illegal arms-smuggling, but most have centered on the alleged pickings made by Menem's officials and relatives during privatization. Perhaps the most flamboyant "icon" of this time is Menem's Minister for Natural Resources, María Julia Alsogaray, who has been in and out of prison on corruption charges during the last few years.

Though the economy has recently seemed to bounce back and is growing at about 7 percent, another three years of comparable growth - something that can hardly be guaranteed - is needed to get the GDP back to its 1998 level. Meanwhile, public debt remains an awesome burden, and though unemployment has recently declined from its peak of over 20 percent, it remains stuck at about 16 percent. This has given rise to the group known as the piqueteros, who maintain a daily protest in front of the presidential palace and who have become part of the current Argentine socio-political landscape

The situation has also proven good fodder for anti-globalists. They herald Argentina's economic collapse as the most egregious illustration of a rapacious globalization and its bankruptcy.

Argentines, however, are far too angry with their own leaders to be overly concerned by global matters. Corruption is the all-consuming topic of discussion. The government is unable to collect much revenue since Argentines carefully avoid paying taxes. They refuse to do so, not simply because they want to hold on to their money, but because they have no idea where their taxes go. Politics have failed in Argentina and the Argentine economy remains incessantly in or near the emergency ward. More damagingly, Argentines feel like they have been duped and thus cannot trust anyone. As a young friend in Buenos Aires put it: "there is no society, no concern for your neighbor; this is the jungle, and to survive you have to be Tarzan".

The real, underlying malaise of Argentina is not politics or the economy, but the irresponsibility and aloofness of its elite. The Menem privatization witnessed the massive enrichment of Menem's cronies. For those with foreign bank accounts and savings in dollars or euros, the collapse of the peso was a godsend, allowing them to buy real estate and other national assets at bargain basement prices. With the crisis, the rich got significantly richer, the poor got significantly poorer and the country's emerging middle class was wiped out. To make matters worse, Argentina suffers from an acute brain drain. No one, it seems, believes in Argentina.

But this does not have to be the case. Argentina should not be an example of what is wrong with globalization. It should rather be an example of the importance of a properly functioning society and a strong government. Without these, a country cannot make a place for itself in the global marketplace. With distance disappearing as information and communication technology improve, Argentina should logically be a vibrant South American hub of globalization. It has excellent products - including wines, agriculture, software, financial services and entertainment - and first-rate skills. While the 19th century saw Argentina in full glory, the 20th has been the country's "lost century". Things are not overly promising at the start of the 21st century. But if young Argentines can build a viable, forward-looking, entrepreneurial society, then we can all stop crying for Argentina.

Jean-Pierre Lehmann (Lehmann@imd.ch) is Professor of International Political Economy at IMD, in Lausanne, Switzerland, and Founding Director of The Evian Group.

Copyright 2004 Yale Center for the Study of Globalization