China continues to build up islets as military bases, moving slowly to press claims in the South China Sea. ASEAN, traditionally focused on trade, no longer sits back, and the 10 nations joined the US Navy in maritime drills that extended into the South China Sea. ASEAN may worry that the Trump administration, distracted by an impeachment inquiry, won't make control of the South China Sea a priority. “The People’s Liberation Army’s regional activities have pushed the ASEAN countries to put their effort on the modernization of their armed forces,” explains Bahauddin Foizee for the Asia Sentinel. The German Institute for International and Security Affairs reports that defense spending in that region has doubled since the year 2000. “Some member states are separately forming security alliances between/among themselves in order to counter any possible threat from the PLA, by far the region’s largest armed forces.” Vietnam has been more assertive than the Philippines, and ASEAN members recognize any one of them could be a target for China. ASEAN countries could also seek alliances with Japan, India or Australia. Foizee concludes that no ASEAN state can tackle China on its own, but collectively, especially with US support, ASEAN could deter intrusion. – YaleGlobal

ASEAN joined the US Navy for a military drill that dipped into the South China Sea; China spends five times more on its military than all ASEAN members combined
Bahauddin Foizee
Wednesday, October 16, 2019

Read the article from Asia Sentinel about concern from ASEAN nations about China’s influence in the South China Sea.

Bahauddin Foizee is a geopolitical analyst and international affairs columnist, focusing on the Asia-Pacific/Indo-Pacific and the Middle East. His works have been published on many think-tank-publications and international newspapers/media-outlets. 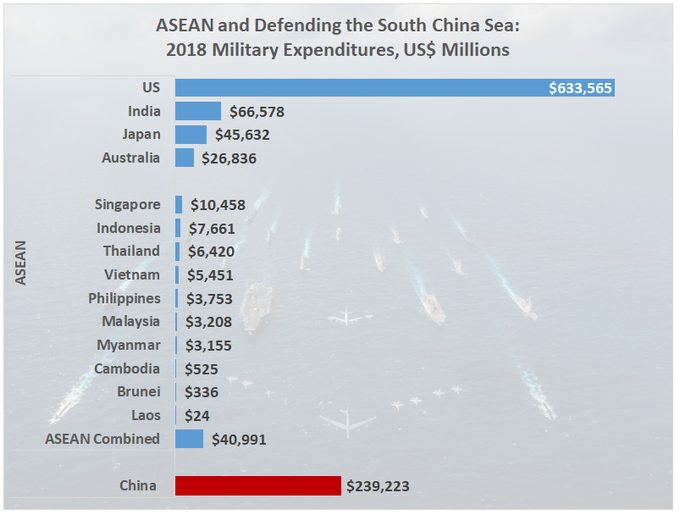 ASEAN may need the United States to defend interests in the South China Sea as the 2018 military expenditures of all ASEAN nations combined, along with those of Japan, Australia and India do not add up to China’s total;  2018 military expenditures for Brunei, Myanmar, Malaysia, the Philipines and Indonesia were down from the previous year (Data Source: Trading Economics and SIPRI; photo of USS Ronald Regan aircraft carrier and Japan’s Maritime Self-Defense Force helicopter destroyer)

Chinese and US Ambitions Constrained