The worsening relations between Japan and its northeast Asian neighbors sank a few notches as demonstrators in China attacked Japanese diplomatic missions and businesses. South Koreans, too, have vented their anger at Japan's attempt to whitewash history. Recently, Japan's Ministry of Education has approved history and civics textbooks for use in schools that are either silent over past Japanese aggression against neighbors or gloss over it. David McNeill and Mark Selden report that the publishers of the revisionist history books – the Society for History Textbook Reform, a conservative faction of Japanese academics – have been encouraged by support from a major media conglomerate. Japan, increasingly conservative, is fed up at being continually asked to atone for the sins of their fathers. Coming at a time when Japan seeks membership on the UN Security Council, the textbook issue has aroused fresh passions. The authors note: "In a year pregnant with political and business possibilities, Tokyo is again finding the way forward blocked by its undigested history." –YaleGlobal

The bitter legacy of the past looms over Tokyo's plans for the future
David McNeill
Monday, April 11, 2005 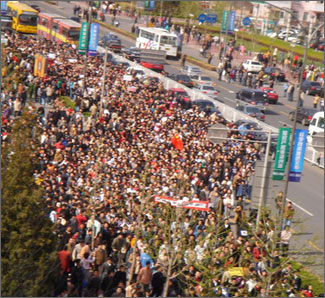 Using the past to serve the present: Chinese oppose Japan's membership of the UN Security Council for failing to atone for its past crimes against the Chinese people

TOKYO: Sino-Japanese relations sunk to a new low last weekend when an estimated 10,000 to 20,000 Chinese protestors surrounded the Japanese Embassy in Beijing, pelting it with missiles and shouting "Japanese pigs come out" and "Be ashamed of distorting history."

The protests, demanding a boycott of Japanese goods, followed Tokyo's authorization of high-school textbooks that many in China condemn for whitewashing Japan's brutal fifteen-year invasion (1931-45), and have rocked the already shaky partnership between Asia's declining economic leader and its rising star.

Demonstrations also took place in South Korea, where Gil Won Ok and her elderly comrades gathered at the Japanese Embassy in Seoul to plead, pray and denounce the Tokyo government. "Who will take away my pain," cried the frail 77-year-old who was barely a teenager when she was forced to provide sex to Japanese soldiers during World War II. "Atone for the past and let me die in peace!"

The pensioners – among the few still alive from an estimated 100-200,000 "comfort women," the sex slaves of the Imperial Japanese Army – have been coming here since 1992 to demand an apology. But neither time nor mortality has dulled the emotional heat of their campaign, which is regularly stoked by what many Chinese and Koreans consider fresh insults. The new textbooks, which Korean government spokesman Lee Kyu Hyung said "beautify and justify" Japan's occupation of much of Asia until 1945, have added fuel to the fire.

The war over what Japan teaches its children has raged since the early 1980s, but the latest battle emerges as the tectonic plates of Asian politics shift to accommodate the growing economic bulk of China, which is brushing up against its increasingly anxious neighbor. Tokyo has paid China compensation of about 3 trillion yen in Overseas Development Assistance since capitalist reforms began there in the early 1980s, and in an increasingly right-wing domestic climate, believes this is apology enough for past sins.

The most contentious history text – one of eight passed for use by Japan's Ministry of Education – removes all references to the comfort women and atrocities such as the Nanjing massacre, and suggests that Korea invited the Japanese occupation a century ago. An additional civics text claims jurisdiction over a clump of rocks called Takeshima (Korean: Tokdo) that Japan seized in 1905 but Korea has held since 1945. "What nonsense is this," editorialized the normally mild Korea Herald.

Both texts were written by the Society for History Textbook Reform, a group of neo-nationalist academics that claims the current curriculum in Japanese schools leaves youngsters "confused and no longer proud of their nation." As an Asahi editorial said last week, the Society wants to "emphasize the 'high points' of Japanese history and ignore the 'darker' aspects; historian Jeffrey Kingston calls them the 'Dr. Feelgoods of Japanese history.' "

In 2001, the Society first won Ministry of Education approval for the texts, but grassroots opposition led by teachers and local activists across Japan blocked adoption. Backed by the huge Fuji-Sankei media conglomerate, the Society has since sold nearly one million copies of its history and civics texts, however, bringing what many considered extremist theories into thousands of ordinary Japanese homes and pushing the content of other textbooks sharply to the right. This year, just one new history textbook out of eight mentions the comfort women, down from seven in the mid-1990s, while references to other infamous war crimes have been toned down or dropped.

Emboldened by its success and by political and media support, including Japan's biggest newspaper the Daily Yomiuri, the Society believes it is moving with the tide. "We're confident we can change the teaching of history in schools here," says one of its leading intellectual lights, Nobukatsu Fujioka. "More and more people share our opposition to instilling self-hatred in our children."

Whether the Society succeeds on its second attempt remains to be seen. In 2001, its opponents cobbled together a powerful grassroots coalition that included everyone from Communists to Christians, and this movement could spring back into life. But while there is miniscule support among ordinary Japanese for school textbooks that extol Japan's colonial rule in Asia, the Society enjoys weighty political backing, including over 100 members of the ruling Liberal Democratic Party and Tokyo's powerful Governor Shintaro Ishihara. Revisionists already control the country's largest educational council in Tokyo, which will decide this summer whether the textbooks will be used in thousands of schools across the megalopolis.

“The Japanese government is inflaming opinion across Asia with these textbooks,” says Hasegawa Takashi, a teacher and anti-textbook campaigner in Tokyo. “If they really think Chinese communists are to blame why play into their hands?”

If Tokyo can afford to ignore the anguished keening of Gil Won Ok and her dwindling fellow survivors, however, more troubling is the anger emanating from China, its biggest trading partner. There the textbooks inflamed already seething anger at Prime Minister Junichiro Koizumi's repeated visits to the Tokyo war memorial Yasukuni Shrine and Japan's handling of the territorial conflict over the Diaoyutai (Japanese: Senkaku) Islands claimed by both China and Japan. In recent weeks, a boycott targeting Japanese goods has grown, and attacks on Japanese businesses in Chengdu and Shenzhen, and now Beijing and Guangzhou, have spooked otherwise bullish investors.

The Chinese attacks come on the heels of a massive online citizens' campaign that claims to have gathered over 25 million signatures opposing Japan's campaign for a permanent seat on the UN Security Council. Foreign ministry spokesman Liu Jianchao last week stated that China will not endorse Tokyo's UN ambitions until it "clarifies some historic issues" regarding its World War II aggression, while Seoul's UN ambassador Kim Sam Hoon also made clear his country's opposition to a permanent seat for Japan. In a year pregnant with political and business possibilities, Tokyo is again finding the way forward blocked by its undigested history.

Japan's official response to the growing textbook controversy has been a series of bland government statements calling on Korea and China to prevent differences in historical interpretation from damaging ties. "It is important to control emotions," Prime Minister Koizumi said. But behind diplomatic platitudes, sentiment has hardened among key elements of the prime minister's fellow Liberal Democrats, who have successfully manipulated a rising tide of nationalism following Mr. Koizumi's failed North Korean summit of 2002. In the past two years, hundreds of teachers, mainly in Tokyo, have been punished for refusing to stand for the national anthem and flag, symbols across Asia of Japan's militarist past.

The hardliners in the government say that China is stoking patriotism and anti-Japanese sentiment, while Korea has failed to properly digest its own history of collaboration with Imperial Japan. But critics say Japan is doing little to help. Perhaps to counter such perception last week, Japan announced that it would sponsor a meeting of 60 NGOs from both Japan and China on April 12 to advance friendship and understanding between the two countries.

Tokyo hopes that red-hot trade with China, which grew by 17 percent last year, and growing cultural links with Korea, will trump the fallout from its provocative views on history. But a clash of nationalisms in the world's most dynamic economic region cannot be good for business, as Japan's corporations recognize. With Japan enmeshed in territorial disputes with four of its neighbors – China, South Korea, Russia, and Taiwan – all with roots in the colonial past, the tensions will not soon ease.

David McNeill and Mark Selden are coordinators of Japan Focus, an e-zine on Japan and the Asia-Pacific: http://japanfocus.org. McNeill, a Tokyo-based journalist, writes for The Independent of London. Selden, professorial associate, East Asia Program, Cornell, is the author of China in Revolution: The Yenan Way Revisited.