Following mass anti-American protests and blistering criticism at Mar del Plata, President Bush has found a bit of respite on his East Asian sojourn. But, as Daniel Sneider, columnist for the Mercury News, is quick to note, “beneath the polite appearance, however, there is no less a challenge to American leadership in Asia.” Plans are afoot, spearheaded by China, to forge an East Asian Community of free trade partners, akin to that of Europe. This development, according Sneider, “offers the most visible expression of a trend of declining American influence in Asia.” With China’s booming economic might and international prestige growing by the day, the US has seen its own importance as a key importer of Asian goods dwindle in the face of burgeoning East Asian cooperation and trade. A unified East Asian bloc poses an immense challenge to US trade interests, yet follows a path that the US itself paved with treaties like NAFTA and the more recent CAFTA. Having long profited from such regional arrangements, the US and its embattled President now turn to East Asia just to keep their place at the table. – YaleGlobal 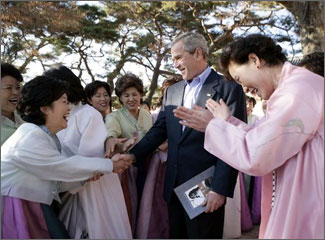 PALO ALTO: On the surface, President Bush’s week-long swing through Northeast Asia has been a strong contrast with his recent stormy (and, some say, stumbling) excursion into Latin America.

There was little sign of overt anti-Americanism. And no Asian leader will openly oppose American leadership in the flamboyant manner of Venezuela’s Hugo Chavez. Even prickly China swallowed President Bush’s barbs about lack of democratic freedom in China, quietly acknowledging the two powers' differences. In contrast to the meeting of leaders from the Americas, the annual summit of the Asia Pacific Economic Cooperation (APEC) forum in Korea will embrace the principles of free trade.

Beneath the polite appearance, however, there is no less a challenge to American leadership in Asia. While Washington fiddled, a powerful momentum has been building up in Asia toward the formation of an East Asian Free Trade Area or, more ambitiously, an East Asian Community, modeled on the European community. Led by China, the East Asian grouping pointedly excludes the United States.

The APEC agenda focuses on an initiative to counter the spread of avian flu and to offer a common push at the WTO meeting in Hong Kong next month to revive the Doha Round of global trade talks. The Bush administration has its own agenda for the APEC meeting: to reposition itself as a leader of economic growth and integration in the region. For this, APEC has the virtue of being a more open organization than those behind the disappointment at the American summit. Its 21 members span the Pacific Rim, bringing together nations from Chile and Mexico to Russia, China and Southeast Asia. But this attention to APEC may be a case of too little, too late. The momentum to give the amorphous APEC an ongoing institutional role, beyond its annual summit meetings, has slowed in recent years. Its pledges for mutual tariff reduction exist almost entirely on paper.

Until this year, the Bush administration barely addressed regional economic issues at APEC. It preferred to use the meetings to promote a post-9/11 security agenda of anti-terrorism. U.S. trade policy has focused more on reaching free trade agreements with a few selected “friends” in that war, such as Singapore and Australia.

Meanwhile a Chinese-sponsored move to hold an East Asian summit offers the most visible expression of a trend of declining American influence in Asia. That meeting will take place in Malaysia in mid-December. The gathering groups the 10-member Association of Southeast Asian Nations, Japan, China, South Korea, India, Australia and New Zealand. Pointedly not invited is the United States. 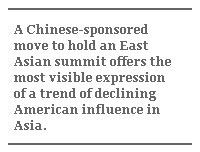 This meeting is an outgrowth of the ASEAN Plus Three (APT) process – an annual dialogue of ASEAN with China, South Korea and Japan that began in December 1997 in the midst of the Asian financial crisis. The APT has grown into an elaborate mechanism for cooperation in a range of areas from finance and agriculture to information technology. This reflects an underlying economic reality – the growth of regional and bilateral trade agreements and the rapid rise of intra-Asian trade.

Until fairly recently, foreign trade in East Asia was dominated by trans-Pacific trade with the United States. But the share of Asian exports headed to the U.S. has dropped dramatically, while those destined for other Asian nations has risen. In the two decades from 1981 to 2001, according to economist Edward Lincoln, the share of intra-regional exports has risen from 32 percent to 40 percent, and intra-regional imports from 32 percent to 50 percent.

Much of the growth of regional integration is being driven by China, which is generating enormous demand for imports of raw materials as well as for semi-finished goods that are assembled for export. China has not been hesitant to use this role to expand its influence in the region. It has embraced the APT as a road towards creation of an East Asian community. At the ASEAN summit last year, Chinese Premier Wen Jiabao declared that such a community was a “long-term strategic choice in the interests of China’s development.” China has also outmatched the U.S. in negotiating free trade agreements, both bilateral and regional. The most impressive is an FTA deal between China and ASEAN set to take effect in 2010. Beijing even dreams of an Asian currency, based on the Chinese yuan, to rival the dollar and the euro.

China is not the first nation to try for such East Asian economic unity. Back in the days when Japan was riding high as an economic superpower, it too talked of leading an East Asian bloc, based on a yen currency zone. As late as 1997, in response to the Asian financial crisis, Japan proposed the creation of an Asian Monetary Fund, a kind of alternate regional financial system. More recently, both South Korea and Japan offered their own visions of an East Asian community in 2001. And both countries tried to match China in the APT by offering to form free trade agreements with ASEAN.

Japan, however, was never as successful as China is likely to be. “It would seem that Japan is a natural counterweight to China, but Tokyo is generally perceived as reactive and incapable of outflanking Beijing,” Brad Glosserman, director of research at the Pacific Forum of CSIS, wrote recently. “Its economic dynamism is no match for that of China.”

The United States has never been friendly toward efforts to create an East Asian economic bloc, viewing them as chipping away at the global trading system and rivaling American leadership. But Asia is arguably only following in American footsteps – witness the NAFTA deal with Canada and Mexico and the more recent trade pact with Central America.

Many American policymakers believe these developments are partly a product of the failure of the Bush administration to articulate—much less pursue—a strategy to engage East Asia.

“The United States has greater strategic interests in Asia now than it did in Europe before World War I or World War II,’’ argued a recent report of the Grand Strategic Choices Working Group, co-chaired by John Hopkin’s University’s Francis Fukuyama and Princeton’s G. John Ikenberry. “Thus,” the report continued, “it is unfortunate that part of the problem, in East Asia in particular, is that America’s relative lack of interest in tending to the region has caused some allies of the U.S. to doubt our resolve and question the value of resisting unfavorable developments alone.”

The report echoes other policymakers in suggesting the U.S. form its own East Asian economic zone with Japan, South Korea and Australia.“That’s a non-starter,’’ says Professor Vinod Aggarwal, director of Berkeley’s APEC study center. “Nobody wants to be cut out of the China market.”

Privately, Bush administration officials downplay the importance of the East Asian summit in December, pointing to the lack of any concrete agenda. The addition of India, Australia and New Zealand to the invitation list, along with Japan, should effectively counter any Chinese initiative, they believe.

But those countries also fear being left out of whatever may emerge from this process. They cannot afford to be left on the outside, looking in.

Ultimately, neither can the United States. The President’s trip is a belated recognition of that fact. But to be more than a momentary gesture, the United States must give East Asia the consistent attention it deserves.

Daniel Sneider, foreign affairs columnist for the Mercury News, is currently a Pantech Fellow at Stanford’s Shorenstein Asia Pacific Research Center. You can contact him at dsneider@stanford.edu.