Terrifying fires are breaking out in Australia, and leaders are divided over bushfire policies, with some pointedly avoiding action on climate change. Instead, they suggest the government could reduce hazards with more controlled fires in national parks. More than 90 percent of climate research points to coal and other fossil fuels as the reason for rising temperatures fueling floods and wildfires. Ideology and polarization over issue infiltrate climate change and every issue, hampering government’s ability to address major disasters. Prime Minister Scott Morrison, sensing this predicament, has called for calm and “an end to the bickering.” This came after one politician dismissed “inner-city lunatics” for demanding an end to reliance on coal and fire victims for their political stances; a Greens senator accused the two major parties of being ‘no better than a bunch of arsonists.’” Morrison has acknowledged the link between climate change and extreme weather events in the past, but urges delaying action on climate policy during the emergency response. Morrison noted, “The last thing that people in an urgent crisis need at the moment is hearing politicians shout at each other.” Fast multi-prong action on climate change is required. – YaleGlobal

As Australia burns, the government bickers over the causes and tries to find scapegoats other than coal, other fossil fuels and climate change
David Crowe and Max Koslowski
Wednesday, November 13, 2019

Read the article from Sydney Morning Herald about political quarreling over wildfires in Australia.

David Crowe is chief political correspondent for The Sydney Morning Herald and The Age.

Max Koslowski is a journalist at The Sydney Morning Herald and The Age. 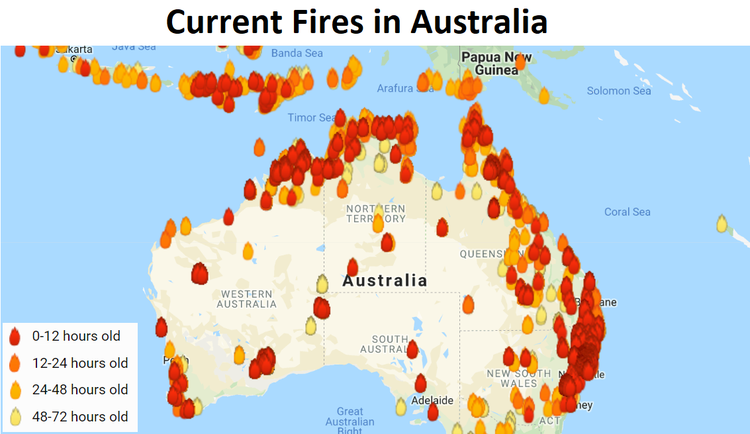 Australia on fire: The government releases fire maps daily, yet warns citizens to rely on local authorities for guidance on protecting life and property (Australia FireWatch)