A Book Review: Bound Together

Globalization, the process of growing interconnectedness, is not a new phenomenon. All that’s new is the ease and speed of the connections. In his book, Nayan Chanda, editor of YaleGlobal Online, follows the exploits of historical traders, preachers, adventurers and warriors in shaping our world, and identifies their modern counterparts at work today. The categories provide insights into globalization’s ongoing process, and Paul Freedman, chair of the Department of History at Yale University, points out how Chanda’s background as an international journalist allows for perceptive observations at both the personal and global levels. Describing Chanda’s analysis as both exciting and sobering, Freedman also ponders why globalization has failed to penetrate some of the poorest places of the world, emphasizing that, despite unprecedented opportunities, the world is still inequitable. Freedman also laments the increasing homogenization of culture, with the erosion of languages and local customs and a neglect of environmental stewardship. Overall, he lauds Chanda for offering a convincing, historically based argument about why globalization persists and an unusually clearheaded assessment that gives cause for both optimism and pessimism in the future. – YaleGlobal

A Book Review: Bound Together 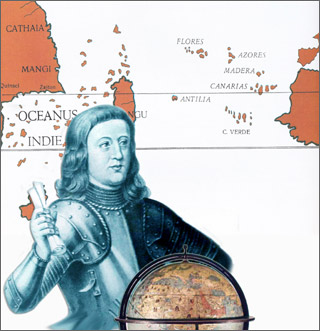 contributing to a world of travel and interconnections. (Debbie Campoli, YaleGlobal)

NEW HAVEN: Homer’s “Odyssey” begins with an invocation of the Muse to tell of “the man of many devices who wandered full many ways.” In his wanderings, both literally and in the imagination, Nayan Chanda has been an unusually perceptive observer of globalization. He has had personal contact with the political, economic and human implications of global shifts, as a witness to the inglorious end of the American presence in Vietnam, as editor of the unusually perceptive and much missed “Far Eastern Economic Review” and also of the “Asian Wall Street Journal Weekly,” and these last six years as a wise presence at Yale.

There are plenty of books out there about globalization, but “Bound Together” is unusual in that it integrates the author’s experiences with the impersonal trends under discussion. An even rarer quality is that the book avoids the breathless and reductionist enthusiasm of so much of the literature on globalization, a subject that, like the coming digital age, attracts a lot of dubious futurology. 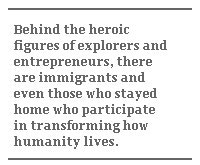 Chanda is at home in the far-flung locales that are at the cutting edge of the global network, notably China and India, but he is also a keen student of everyday phenomena in the US. The opinions of his New Haven electrician about globalization and the Brazilian rainforest, for example, introduce the text and so reveal to the reader what unifies a series of fascinating particular observations: the role of ordinary people in tying the world together, and how the consequences of this integration are felt and perceived by ordinary people. Behind the heroic figures of explorers and entrepreneurs, there are immigrants, missionaries and even those who have stayed home to participate nonetheless in transforming the way humanity lives.

Rather than seeing globalization as something new and startling, like the computer, that has had an unpredictable impact on everyday life, Chanda shows the reader that globalization has a long history. The medieval European love of spices or the Arab enthusiasm for porcelain and perfume created economic links across oceans and deserts that caused immense political and social changes. The Central Asian Silk Route provided a vehicle for the spread of Buddhism, Manichaeism and ultimately the triumph of Islam. A growing appetite for sugar in the 17th and 18th centuries led to the transformation of the Caribbean islands and the establishment of the transatlantic slave trade.

The deep background for contemporary interconnectedness demonstrates the inevitability of globalization. The ongoing reshaping of the world can be managed to some extent, but the profound chronological context of exchange proves the folly of thinking that it can be resisted. Chanda’s take on the inexorable nature of globalization is not just the unreflective assumption that what is happening now can be projected into the future, nor is he a cheerleader for the profitable consequences of increasing integration. He knows that the acceleration of global exchanges does not necessarily mean tolerance, health or economic benefit for all.

The book reaches back to the first desert caravans and right up to the present moment, but chronology does not provide the outline for orienting the work. Rather, “Bound Together” is organized by chapters on different kinds of global interactions within which ancient and medieval and modern examples jostle to demonstrate not merely the relevance of the former but to reveal a pattern of how ideas as well as commodities change our lives. The impact of religious doctrine (preachers) is given a chapter, as is the better-known significance of commerce (traders). A chapter on the ambitions of empires (warriors) moves from the Mongols to the laying of the first transatlantic cable in Victoria’s reign. A previous section on travel and immigration begins with the Spanish voyages of 1492 and ends with the current immigration of Africans to Europe. The last part of the book is more forward looking, arguing that globalization is “here to stay,” acknowledging that it has aroused opposition, and concluding that the future is both promising and threatening.

This book is therefore a sober view of globalization and, at the same time, a very exciting one to read because of the fascinating details and perceptive anecdotes. If globalization is inevitable, it isn’t necessarily all that likable. The paths of commerce are followed by diseases; Africa and to some extent Latin America have been further impoverished as Asia has been enriched.

What is perhaps downplayed in this assessment is what we have lost and are losing as the world becomes more homogenized. A central paradox of globalization is that it makes life more varied while erasing the specificity of place and culture. This paradox benefits those looking for mediocre Thai food in New Haven, for example, but it also means that Thailand itself comes to look more and more like everywhere else. Is it a coincidence that China is the major power with the fastest economic growth and also the country least interested in preserving its architectural and natural legacy? These observations are not just elitist carping. There are measurable consequences to homogenization, such as the accelerated disappearance of the world’s languages, the near extinction of indigenous peoples, the transformation of traditional artifacts into world-music and tourist junk and, of course, truly disastrous and unpredictable ecological consequences. Perhaps that electrician wasn’t so very naive. This is perhaps more the reviewer’s reaction to reading this account of globalization than any sort of fault in the actual work, whose mission is an account of material rather than aesthetic consequences.

Fair as this treatment of globalization is, the sorry condition of Africa and other parts of the world (Haiti, much of Latin America) does not quite fit in with the positive consequences attributed to globalization. As was observed many years ago by the much-maligned V.S. Naipaul, a country like Congo is actually less tied to the rest of the world than it was under even the dreadful rule of Belgium as its infrastructure, decayed when Naipaul wrote in the 1970s, is now in total ruin and much of the country’s population lives not merely in poverty but in virtual inaccessibility. Here the result of global influence has been to return a huge country to a pre-modern condition. 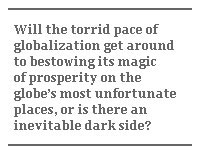 It’s not just that some regions have lagged behind, but that much of the world is in a structurally worsening situation –and this is not just in pockets of remoteness irrelevant to the global economy. Some parts of Africa that are theoretically rich, such as the Niger Delta, are also sites of turmoil and possible breakdown. Will the torrid pace of globalization finally get around to bestowing its magic of prosperity on these unfortunate places, or is there an inevitable under- or dark side? These are items for further reflection as the drama unfolds. Nayan Chanda has provided us with the best available program to anticipate the drama because he has given us globalization’s cultural settings along with its economic implications.

Paul Freedman is the Chester D. Tripp Professor of History and chair of the Department of History at Yale University.

“Bound Together: How Traders, Preachers, Adventurers, and Warriors Shaped Globalization” by Nayan Chanda was published by Yale University Press in May 2007. Click here for an excerpt of the book.