Israel’s air strikes on Southern Lebanon boost support for Hezbollah in the Arab world, as many lose faith in already struggling Arab democracies. Outlining the history of Hezbollah in a region prone to setbacks and violence, Middle East analyst and author Dilip Hiro predicts that the present fighting paves the way for more Arab rulers to resort to repressive measures in order to control dissent or extremism. Hezbollah’s attacks may have been just one more step in their long struggle over prisoner exchanges with Israel, but Israel’s fierce retaliation could have much wider consequences. The Israeli attacks, Hiro says, undermine the legitimacy of the moderate Arab regimes and unwittingly shore up the fortunes of the Islamist forces in the Arab world as well as those of Iran. The attacks spur anger against Israel, support for Hezbollah and repression by Arab governments, thus setting back the movement toward democracy in the region – an avowed goal of American policy. – YaleGlobal 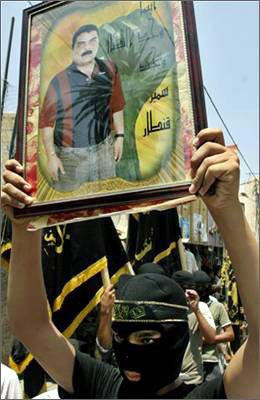 Prisoner of history: The Hezbollah attack precipitating the Lebanon crisis was the latest in a long fight to win release of prisoners like Sameer Kintar from Israeli jails

LONDON: While Hezbollah’s kidnapping of Israeli soldiers has provided Israel with a casus belli to wreak widespread death and destruction in Lebanon, its continuing resistance raises its standing in the Arab and Muslim worlds – despite Hezbollah’s minority Shiite credentials, closeness to Iran, and censure by many Arab governments. If the current fighting ends in a prisoner exchange – as part of a package, or separately, as has happened in the past – the bloody episode will only widen the gap between the ruler and the ruled in the predominantly authoritarian or semi-authoritarian Arab world, leading the ruling elites to resort to repression.

To understand how and why Hezbollah has loomed so large on the Israeli radar, take a quick canter down the history lane. By all accounts, Muslims now make up two thirds of the Lebanese population, with Christians half as numerous. But such is the “confessional democracy” – established by France as the Mandate Power, modified after the 1975-1990 civil war and buttressed by the Cedar Revolution of 2005 – that Muslims and Christians have an equal share of seats in the 128-member parliament.

Being the poorest, Lebanese Shiites have been the traditional underdogs. In 1967 Ayatollah Musa al Sadr – sent to Lebanon by the Shiite leaders in the Iranian holy city of Qom to provide guidance to their Lebanese co-religionists – formed the Higher Shiite Communal Council (HSCC). When the Lebanese civil war erupted in 1975, Sadr set up a militia adjunct to the HSCC, called the Lebanese Resistance Detachments, popularly known by its Arabic acronym Amal. Three years later, during a trip to Libya, Sadr “disappeared.”

Amal split after the Israeli invasion and occupation of Lebanon in June 1982, with the radicals forming Hezbollah, or Party of God, to resist the occupation actively. This brought it in cahoots with the 2,000 Iranian Revolutionary Guards, based in the eastern Lebanese town of Baalbek after their arrival from Iran via Syria.

As Hezbollah escalated guerrilla attacks on Israel in southern Lebanon, Tehran increased its military aid, with Syria acting as the conduit. Through its Martyrs Foundation, Iran sent funds to Hezbollah to provide health, education and other public services to needy Shiites.

Hezbollah assisted Iran by periodically taking Westerners, mainly Americans, as hostages, using such labels as the Organization of the Oppressed of the Earth, assuming that their captivity would inhibit US military intervention in the 1980-1988 Iran-Iraq War on the Iraqi side – an effective ploy. Hezbollah also used the American hostages to secure US-made weapons in 1985 clandestinely for Iran, which had been equipped with such arms before the 1979 revolution – exposed as the Iran-Contra Affair in November 1986.

After the end of the Lebanese civil war in October 1990, Hezbollah fighters moved to the area adjacent to the Israeli-occupied southern Lebanon.

Steadily, Hezbollah increased attacks on the Israeli and its surrogate south Lebanon army targets, pushing the total to 1,200 in 1998. Unable to withstand the pressure, Israel withdraw unconditionally from southern Lebanon in May 2000, except from the disputed Shebaa Farms, as required by the UN Security Council resolution 509 of June 1982.

This boosted the standing of Hezbollah, led since 1992 by Hassan Nasrallah following the assassination of his predecessor Abbas Musawi by the Israelis. By then, Hezbollah had contested three general elections and established a parliamentary presence, with enough political clout to resist surrendering arms.

After the start of the Second Palestinian Intifada in September 2000, Hezbollah abducted a former Israeli colonel from inside Israel. Following tortuous negotiations, in January 2004 Israeli Prime Minister Ariel Sharon exchanged 436 Lebanese prisoners and 59 corpses of Lebanese soldiers for one Israeli hostage and three corpses of Israeli soldiers.

At the last minute Sharon held three prominent Lebanese detainees. Since then Hezbollah has vowed to secure their release by abducting Israeli soldiers. The latest abduction, which Israel treated as a major provocation, is more the continuation of the earlier struggle rather than the opening salvo of a wider Iranian-Shiite campaign against Israel.

On July 12, Hezbollah mounted its attack inside Israel, killing three Israeli soldiers and taking two as hostages. Nasrallah claimed that Hezbollah leaders had begun planning the assault five months earlier. Equally, Israel’s massive retaliation showed that its objective went far beyond the release of a couple of abducted soldiers. Lacking the military experience of a Sharon, Israeli Prime Minister Ehud Olmert has ceded his supreme political authority to the defense forces’ high command imbued with thinking in purely military terms.

The resulting mayhem benefits Tehran diplomatically. The UN Security Council put on hold drafting of a resolution critical of Iran for its failure to suspend its uranium-enrichment activities.

Iran improved the chances of a continued freeze by informing Russia, hosting the G-8 summit, on July 16 that the six-nation incentives package on the nuclear issue was “an acceptable basis” for discussion. Its decision did not clash with the earlier statement that its comprehensive response, including counter-proposals, would not be forthcoming before August 22, the end of the Iranian month of Murdad.

On the other hand, the timing has been awkward for the region’s Arab regimes, which did nothing when Israel applied disproportionate force in Gaza following the kidnapping and killing of Israeli soldiers.

Earlier, excepting Syria and Qatar, most Arab nations were shocked and embarrassed by Hamas’ landslide victory in the Palestinian elections. They did nothing to help Hamas when the West cut the financial aid of about $1 billion a year to the Palestinian Authority. By contrast, Iran was the first country to offer publicly $30 million to the Hamas government.

By inflicting collective punishment on Lebanese by wantonly destroying their infrastructure – bridges, power plants, factories, air and seaports, and residential blocks – Israel stokes hatred for decades to come. Israel also undermines the legitimacy of the moderate Arab regimes and unwittingly shores up the fortunes of the Islamist forces in the Arab world as well as the Islamic Republic of Iran.

Or it may be that Israel is exploiting Hezbollah’s aggressive action to destroy its arsenal and render it virtually harmless. Then, Israel would be free to bomb Iran's suspected nuclear sites – if the Bush administration decides against doing so – without worrying about Hezbollah’s response. Buoying Israel is the Bush administration’s decision to airlift bunker-busting bombs to its military and describing Israel’s 1,200 strikes on Lebanese sites as “the birth pangs of a new Middle East.”

Repeating the past pattern, the Arab leaders will resort to repression. That will be a setback for the movement toward democracy in the region which, we are told, remains the overarching aim of America, the prime protector and guardian of Israel.

Dilip Hiro is the author of “The Essential Middle East: A Comprehensive Guide,” published by Carroll & Graf, and most recently, “The Iranian Labyrinth: Journeys Through Theocratic Iran and Its Furies,” published by Nation Books.