British Ambassador to the US Kim Darroch resigned soon after release of his candid assessments describing the US president and his administration as inept and insecure. The UK is in the midst of a prime minister race after Theresa May failed to secure parliamentary agreement on Brexit plans. The candidates: Jeremy Hunt supported Darroch and Boris Johnson declined to do so: “it is understood [Darroch] made the decision while watching Tuesday night's Tory leadership debate, in which Mr Johnson – the man widely expected to win and become PM – repeatedly declined to rule out replacing him,” reports the Independent. Johnson, a fierce Brexit supporter, maintains that Britain’s European Union membership reduces the country’s independence in world affairs. Instead, he signals a desire to strengthen ties with the United States, particularly the Trump administration and its economic policies. Other politicians express concern about Johnson’s failure to stand up for a British citizen under attack by a foreign government, with one noting: “If the UK can’t protect diplomatic communications and that costs people their careers when all they’ve done is to execute the wishes of the government we will degrade the quality of our envoys, diminish our influence and weaken our country.” The United States and the United Kingdom are polarized over issues like Brexit and climate change. Both governments must be newly cautious about leaks and sabotage designed to embarrass officials on the foreign stage and influence policies at home. – YaleGlobal

Leaks, sabotage, foreign influences: UK ambassador to US Darroch resigns after Boris Johnson, in race for prime minister, refuses to back him over Trump remarks
Kim Sengupta and Rob Merrick
Wednesday, July 10, 2019

Read the article from the Independent about the resignation of the UK ambassador to the US.

Kim Sengupta is Defence and Security Editor for The Independent. He has reported from conflicts across the globe including Afghanistan, Iraq, Syria, Libya, the Balkans, Ukraine, Georgia, Kosovo, Mali, Sudan, Somalia, Kashmir, Israel, Gaza and Northern Ireland, as well as covering diplomatic issues in the UK and abroad.

Rob Merrick is deputy political editor of The Independent. 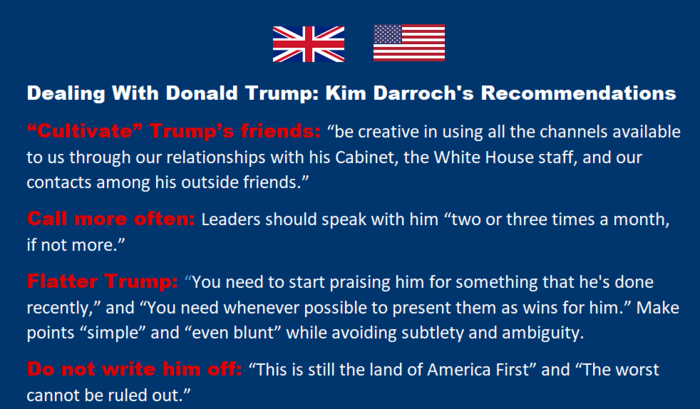 Five Scenarios for Brexit – With Only One Good Outcome

All intellectual property rights, including copyright, in the content accessible (or available for download) on the Website, including text, pictures, graphics, video, audio material, software or any other form (Content) belong to Independent.co.uk or its licensors. All rights are hereby reserved.