The landmark Treaty on the Non-Proliferation of Nuclear Weapons, put in force in 1970, has three goals: preventing spread of nuclear weapons or technology, promoting cooperation in peaceful uses of nuclear energy and encouraging nuclear disarmament. Because disarmament has not been a priority, the technology has slowly spread, as individuals or nations sell expertise for money or influence. Developments in recent years have shown how possession of nuclear weapons not only serves as a deterrent, but is a currency of power. As Burma specialist Bertil Lintner details in this article, isolated and xenophobic military rulers of Burma may be the latest country pursuing the path of nuclear power. While Burma’s close ally China may not be happy with Burma toying with nuclear technology, Russia and North Korea may be game. Whether geared to a weapons program or not, the pursuit of nuclear energy by the secretive and ruthless Burmese regime adds to concerns of the country’s worried neighbors. – YaleGlobal

Rich with uranium and desperate for control, the Burmese junta may find a nuclear option attractive
Bertil Lintner
Wednesday, December 3, 2008 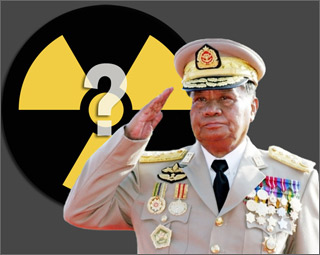 Power salute: Burmese strongman General Than Shwe; reports of Burmese search for nuclear technology are a cause of regional concern. Enlarge image

CHIANG MAI: Over the past year, Southeast Asia’s diplomatic community has tried to sort fact from fiction in a stream of unconfirmed reports from Burma, the region's most isolated and secretive country. Burma’s fledgling nuclear program with Russian assistance and its mysterious connections with North Korea raise concern in the region about its purpose.

According to Burmese exiles in Thailand, the Russians and North Koreans assist the Burmese in developing nuclear capability. But wary of similar reports by Iraqi exiles a few years ago, which turned out to be false, the international community remains skeptical. In a research paper for Griffith University, for example, Australian scholar Andrew Selth, dismisses the reports.

Nevertheless, certain facts are not in doubt. Burma first initiated a nuclear research program as early as 1956, when its then-democratic government set up the Union of Burma Atomic Energy Center, UBAEC, in then-capital Rangoon. Unrelated to the country's defense industries, it came to a halt when the military seized power in 1962. New power-holders, led by General Ne Win did not trust UBAEC head Hla Nyunt. 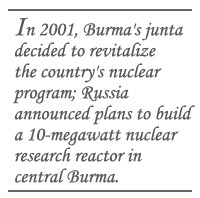 In February 2001, Burma's present junta, the State Peace and Development Council decided to revitalize the country's nuclear program, and Russia's Atomic Energy Ministry announced plans to build a 10-megawatt nuclear research reactor in central Burma. In July 2001, Burma established a Department of Atomic Energy, believed to be the brainchild of the Minister of Science and Technology, U Thaung, a graduate of Burma's Defense Services Academy and former ambassador to the United States. US-trained nuclear scientist Thein Po Saw was identified as a leading advocate for nuclear technology in Burma.

At a press conference in Rangoon on January 21, 2002, Vice-Chief of Military Intelligence Major-General Kyaw Win issued a statement: “Myanmar's consideration of building a nuclear research reactor is based on the peaceful purposes getting modern technologies needed for the country, availability of radioisotopes being used peacefully, training technicians and performing feasibility study for generation of electricity from nuclear power." 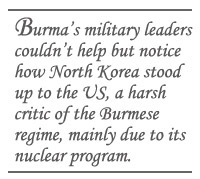 However, observers pointed out the Russian-made nuclear-research reactor that the Burmese authorities sought to acquire is similar to the 5-megawatt research reactor that the then–Soviet Union installed at Yongbyon in North Korea in 1965, from which North Korea later extracted plutonium for a nuclear device. Burma’s military leaders couldn’t help but notice how North Korea stood up to the US, a harsh critic of the Burmese regime, mainly due to its nuclear program.

Reports have been murky since. In April 2007, days after the restoration of diplomatic ties between Burma and North Korea – broken since North Koreans detonated a bomb in Rangoon in 1983 – a North Korean freighter, the Kang Nam I, docked at Thilawa port. Burmese officials claimed that the ship sought shelter from a storm. But two Burmese reporters working for a Japanese news agency were briefly detained when they went to the port to investigate, indicating possible other, more secret reasons for the visit.

According to the July 2007 issue of the Irrawaddy, a Thailand-based publication by Burmese exiles: "by a strange coincidence, the 2,900-ton North Korean cargo vessel MV Bong Hoafan...sought shelter from a storm and anchored at a Burmese port last November. The Burmese government reported that an on-board inspection had 'found no suspicious material or military equipment.' But journalists and embassies in Rangoon remained skeptical."

At about the same time, the South Korean news agency Yonhap reported "a North Korean ship under US surveillance was believed to have unloaded self-propelled artillery at a Myanmar port."

The deal with Russia was stalled for several years, but in May 2007, Russia's atomic energy agency, Rosatom, announced construction of the nuclear-research reactor. According to Rosatom, the reactor would use low-enriched uranium, not plutonium. Up to 350 Burmese nationals, most military personnel, already trained in Russia under the initial 2001 agreement, and since then several hundred more trained at Russian institutions. 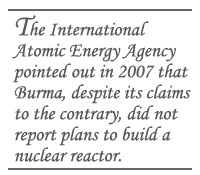 Signatories of the agreement reached in Moscow on May 15, 2007 were U Thaung and Rosatom head Sergey Kiriyenko. According to Rosatom's press release: " The sides have agreed to cooperate on the establishment of a center for nuclear studies in the territory of Myanmar (the general contractor will be Atomstroyexport). The center will comprise a 10-megawatt light water reactor working on 20 per cent-enriched uranium-235, an activation analysis laboratory, a medical isotope production laboratory, silicon doping system, nuclear waste treatment and burial facilities. The center will be controlled by IAEA."

Despite that claim, the International Atomic Energy Agency reported on May 17, 2007, that Burma had not reported plans to build a nuclear reactor. As a signatory to the Non-Proliferation Treaty, Burma is required to allow inspections of any nuclear facilities.

The agreement does not mention North Korea, but in November 2003 the Norway-based broadcasting station Democratic Voice of Burma, run by Burmese exiles, reported that 80 Burmese military personnel had departed for North Korea to study "nuclear and atomic energy technology."

The report remains unconfirmed, its source unclear. If Burmese military personnel traveled to North Korea, it’s more likely for training in maintenance of missiles, which Burma then wanted to buy from North Korea but could not yet afford.

Alarm bells rang in August 2008, after India withdrew permission for a North Korean plane to overfly its airspace on route to Iran, just before taking off from Mandalay in Burma where it had made a stopover. The Ilyushin-62 carried unidentified cargo, and it’s destination after the stopover was unclear.

Reports of some cooperation between Burma, Russia, North Korea and Iran have also come from two Burmese nationals, an army officer and a scientist, who recently left the country. According to them, a Russian-supplied 10-megawatt research reactor is being built, at Myaing, north of Pakokku, said to be for peaceful research. But according to the defectors, another facility exists south of the old hill station of Myin Oo Lwin, formerly known as Maymyo. Three Russians supposedly work there while a group of North Koreans are said to engage in tunneling and constructing a water-cooling system. The defectors also assert that in 2007 an Iranian intelligence officer, identified only as "Mushavi," visited Burma. Apart from sharing nuclear knowledge, he reportedly provided advice on missile systems using computer components from Milan. 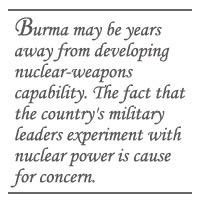 Burma has uranium deposits, and the Ministry of Energy has identified five sources of ore in the country, all low-grade uranium unsuitable for military purposes. But the defectors claim that two more uranium mines in Burma are not included in official reports: one near Mohnyin in Kachin State and another in the vicinity of Mogok in Mandalay Division. The ore is supposedly transported to a Thabeikkyin refinery, conveniently located between the two alleged mines.

Until such reports can be verified, or refuted, speculations remain. But a nuclear-powered Burma would be a nightmare for all neighbors and would upset the balance of power in the region. All that is certain is that Burma has a nuclear program. It may be years, if not decades, away from developing nuclear-weapons capability. But the fact that the country's military leadership experiments with nuclear power is cause for concern.