Bush at the Rubicon

US President George W. Bush seems to have his heart set on going to war against Iraq. No matter what entreaties for patience are offered, he appears more convinced than ever that military action to bring down Saddam Hussein is the only way to ensure Iraq will not threaten the world with biological and chemical weapons. – YaleGlobal

Bush at the Rubicon

Can the leader of the world's most powerful nation be persuaded to go against his instincts?
Strobe Talbott
Thursday, January 23, 2003 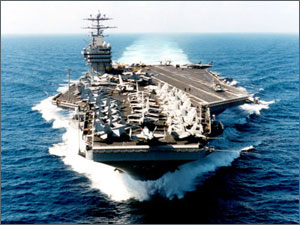 WASHINGTON: George W. Bush keeps telling the world he is still open to a peaceful solution in Iraq, but he acts as though he believes there is no such thing. Recent visitors to the Oval Office are struck by the president's single-mindedness on this subject. No matter what they come to discuss - the economic stimulus package, themes for the State of the Union message, the fiscal plight of the American states, trade policy, judicial appointments, the emerging field of Democrats who want his job two years from now - Bush brings the conversation quickly to Iraq and the urgency, as he sometimes puts it privately, of "getting this thing done." This week he went public with his impatience: the inspections were turning into "a rerun of a bad movie," he said, "and I'm not interested in watching it."

A few presidential friends and advisers have pointed out, ever so politely, the perils of going to war, especially now. Osama bin Laden and al-Qaeda are still at large and eager to exploit what they will portray as the latest crusade of the infidels. The impasse in the Arab-Israeli conflict plays into the strategies of Osama and Saddam alike. Meanwhile, half a world away North Korea is using the American preoccupation with Iraq to rush ahead with its own nuclear-weapons and ballistic-missile programs.

Bush listens to these cautions with a combination of body English and skeptical comebacks that make clear he just isn't buying. He seems convinced that if the war goes well, it will deprive future terrorists of made-in-Baghdad biological, chemical and nuclear weapons; it will remove from the Middle East one of Israel's most dangerous enemies and thus, perhaps, make peace more likely down the road; it will eliminate from the Gulf a tyrant who has bullied his Arab neighbors; and it will send a signal that the U.S. is serious about bringing down any regime it regards as a menace to world peace.

Thus, Bush seems to have reached the banks of his own Rubicon - the point at which he feels he has heard enough of the arguments against what his instincts tell him he should do. He understands that it is the consequence of a decision, not the rationale for it, that determines how it will be judged. He wants to end the debate with action and dispel the doubts with success.

So the question becomes, what will constitute a success that vindicates the biggest gamble of Bush's presidency?

In the near term, the crucial requirement is that the war neither drag out nor spread. Once the first American cruise missiles slam into Iraqi anti-aircraft batteries, command bunkers and presidential palaces, Saddam will try to draw Israel into the fighting, thereby stirring up the passions of the Arab street and, he hopes, igniting a conflagration in the Greater Middle East and perhaps as far away as Indonesia.

The most worrisome danger zone is South Asia. A wave of antiwar protests in Pakistan could sweep President Pervez Musharraf aside and bring to power radicals who would have their fingers on the only deliverable nuclear weapons in the Islamic world. That development could, in turn, provoke India to exercise its own version of the preemption doctrine that the Bush administration made famous and fashionable last fall.

In order to avoid a cascade of unintended consequences, Bush must use the firepower he is assembling in the Gulf as a terrible swift sword that beheads Saddam in a single stroke.

Even if the war is quick and contained, the aftermath is sure to be messy, protracted and expensive. Keeping a large, fractious and initially headless country under control will require foreign occupation and reconstruction on a massive scale. The U.S., which cannot undertake that task by itself, will look to a consortium of regional and world bodies. The willingness of others to join will depend in large measure on whether they feel they had a say in the decision to go to war in the first place, and whether the operation is seen to have been authorized by the UN. That argues for Bush curbing his impatience with the Security Council and bringing that body along with him as the showdown continues, even if it means a delay in the war.

In the longer term, judgments of the wisdom of what Bush does this winter in Iraq will take account of the conduct of American foreign policy around the globe during the remainder of his term. The best aftermath of yet another display of Uncle Sam's military prowess would be a period in which American diplomatic skill and leadership return to the fore, notably in the Middle East.

If, instead, a thumping triumph in Iraq solidifies the administration's proclivity to give short shrift to the rest of the world's views, the U.S. could find itself with few friends and allies when it runs into trouble on some future battlefield - or, for that matter, on the occupied territory of post-Saddam Iraq.

Strobe Talbott is the president of the Brookings Institution (www.brookings.edu). He was deputy secretary of state in the Clinton administration and the first director of the Yale Center for the Study of Globalization.