Can Asia Rescue the Global Economy?

During the 1997-98 Asian financial crisis, US financial experts lectured Asians to accept good governance, transparency and free-market outcomes while avoiding drastic government intervention. Asian nations indeed tightened their belts, saving funds and seeking out safe havens for funds, including US Treasury bills. “This inflow of foreign lending conveniently enabled the Bush administration to fund ever-increasing budget deficits resulting from tax cuts and increased expenditure,” explains corporate strategy professor Linda Lim with the University of Michigan. Increased deficit spending in the US, led to excesses in some markets, particularly real estate. As housing prices decline and spending slows, the US confronts the largest banking and credit crisis in 80 years. Lim cautions that businesses can’t look to Asia for quick relief: Asia’s large sovereign wealth funds are wary about reporting requirements and protectionist complaints, and Asian savers won’t change old habits quickly. Lim concludes that the crisis will likely encourage a gradual increase in foreign investment in the US and greater cooperation among nations, along with strong government regulation and new fiscal discipline. – YaleGlobal

Can Asia Rescue the Global Economy?

The risk-averse continent can’t keep pace with US spending, but could instill fiscal discipline in the global markets
Linda Lim
Monday, September 29, 2008 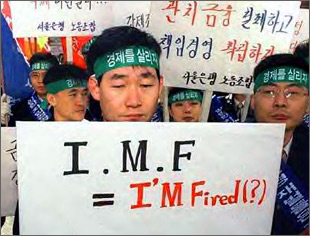 ANN ARBOR: What change a decade brings. Western bankers and pundits who hectored Asians for poor governance and lack of transparency during the 1997 financial crisis now hope for help from Asia as the hallowed “Anglo-American financial system” implodes.

Asian countries whose currencies and economies collapsed then were not victims of their own monetary or fiscal profligacy. Unlike the US today, their governments did not have large budget deficits, nor did they cause inflation by printing money. Some like Thailand had fixed exchange rates which became overvalued because they were tied to a then-strengthening US dollar, and capital-market liberalization attracted large short-term foreign capital inflow. This “hot money” built up domestic asset bubbles and generated large current account deficits, which attracted currency speculators. Other countries like Indonesia were victims of financial contagion once their neighbors’ currencies crashed.

Since then, many though not all economists have concluded that capital market liberalization and free capital flows in developing countries not only fail the test as an unalloyed good, but are unnecessary and, at worst, pernicious. 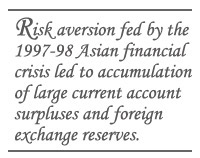 Post-crisis, Asian governments and financial sectors did not follow the Anglo-American free-market model in its entirety – though Korea did allow some of its banks to be bought by the likes of Goldman Sachs. At the macroeconomic level, risk aversion fed by the crisis led to accumulation of large current account surpluses and foreign exchange reserves, reducing vulnerability to capital outflow-induced crisis in now-floating exchange rate regimes. China and India retained capital controls, and China retained its 1994 currency peg to the US dollar.

Not surprisingly, the US current account deficit ballooned while consumption, investment and government spending boomed. Before becoming chairman of the Federal Reserve, Princeton economics professor Ben Bernanke noted that a “global savings glut,” much of it from Asia, would enable large US government deficits to be financed by foreigners for a long time. Less sanguine economists like former Treasury Secretary Larry Summers called this a “balance of financial terror,” warning that foreigners were willing to hold ever-depreciating US financial assets only because they would stand to lose even more by withdrawing their money. That financial terror emerged this month, not from foreign investor withdrawals, but from Wall Street. 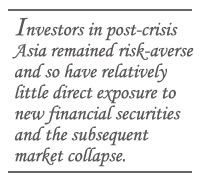 Low interest rates enabled by foreign capital inflows and Fed policy encouraged risk-taking by US financial players seeking higher returns, who developed complex new financial instruments, including subprime mortgages, securitization, derivatives, credit default swaps and an explosion of hedge-funds. Unlike their European counterparts, banks and investors in post-crisis Asia remained conservative and risk-averse, so have relatively little direct exposure to these new securities and their subsequent market collapse. However, they too are now suffering from the ensuing global credit crunch.

As the subprime mortgage bubble burst last year, Asian sovereign wealth funds – like those of oil- and commodity-exporting Norway, Australia and Persian Gulf states-- saw an opportunity to diversify their US dollar portfolios beyond Treasuries, the return on which kept dropping with Fed interest rate cuts, rising US inflation and a relentlessly depreciating dollar.

They began acquiring significant stakes in Western financial institutions such as Blackstone private equity group (bought by China’s CIC), and UBS, Citigroup and Merrill Lynch (bought by Singapore’s GIC and Temasek). Previous attempts by foreign state entities such as CNOOC, Dubai Ports World and Chinese telecom companies to purchase hard assets in the US had been forestalled by nationalist outcries. But by this time last year, Wall Street, if not Main Street, had become grateful for foreign capital infusions.

Ironically, sovereign wealth funds were attractive saviors precisely because they were state-owned. At a time when no large private investors would put shareholders’ money into such troubled institutions, sovereign wealth funds could. Government-owned, they have longer investment time-horizons, arguably can take bigger risks, face weaker disclosure and accountability requirements, and don’t have to make money for citizen shareholders who lack the option of withdrawing money out of the funds if they under-perform.

But concern about a protectionist political backlash in a US presidential election year and unwillingness to meet disclosure requirements triggered by buying more than a threshold share – about 10 percent – of an American or European financial institution meant that the sovereign wealth money was never enough to make a real difference. 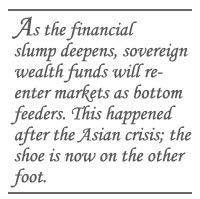 Losses of 40 percent or more in the value of such investments also made these funds reluctant to throw good money after bad, especially given domestic political backlash against their bailouts of Western institutions. Government-owned Korea Development Bank, for one, was forbidden to buy Lehman Brothers, while China’s government has been criticized in blogs and online chat-rooms for wasting its citizens’ money on foreign financial adventures, rather than rescuing domestic investors in the plummeting Chinese stock market or funding unmet social investment needs at home.

Nevertheless, as the financial slump deepens and uncertainty over the US presidential election ends, sovereign wealth funds will re-enter the market as bottom feeders, picking up impaired financial sector assets at fire-sale prices, such as Japan’s Mitsubishi Bank is doing with Morgan Stanley and Nomura Securities has done with Lehman’s non-US assets. This happened after the Asian crisis; the shoe is now on the other foot. But unless Americans are willing to accept foreign governments controlling prime financial assets that lie at the heart of the US capitalist system, these inflows probably will not be large enough to make a significant difference to capital markets.

Asian consumers are also not likely to rescue the US economy by purchasing more US exports, since the US accounts for over 20 percent of world GDP versus 5 percent for China, and any increase in Asian consumption is much more likely to involve purchases of commodities, manufactures and services from one another, than from the higher-cost, more distant US.

So salvation for the Western world’s economic downturn won’t come from Asian capital or consumption. Perhaps more significantly, the flaws of capital-market-driven economics in the West, and of political-protest-ridden emerging democracies in the East, may encourage a return to more statist and less-democratic economic and political regimes in Asia – an about-face from the market and political liberalizations of the 1990s.

We can expect three outcomes:

First, financial liberalization, marketization and democratization in Asia will proceed at a slower pace given the risk-aversion reintroduced by the current global financial turmoil.

Second, Asian portfolio and direct investment in the US will continue to increase, but not hugely or immediately. 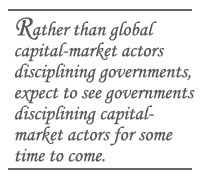 Third, in contrast to one-way learning-from-the-West how to manage a financial system after the Asian crisis, there will be more two-way learning and sharing, involving a larger, stronger role for government as regulator and investor than imagined 10 years ago. Rather than global capital market actors disciplining governments, expect to see governments disciplining capital market actors for some time to come.

Finally, do not expect a major reorientation of Asia’s economic growth path away from the high-savings, low-consumption, high-investment, high-exports, high current-account-surpluses, high foreign-exchange reserves and managed-currencies model. Far from withering away, in both Asia and America, the state-in-the-economy is here to stay.

Linda Lim is professor of strategy, with the Ross School of Business, University of Michigan.