Can the Doha Round Be Salvaged?

The Doha Round began in 2001 as an attempt to eliminate trade barriers and encourage global commerce among developing nations. But countries submitted lengthy wish lists to the negotiators. With collective agreement required among 149 member countries of the World Trade Organization (WTO), it’s no surprise that the round has stalled. The Doha Round struggles from an inherent contradiction – member countries want to level the playing field, but balk at yielding more concessions than they receive from others. The wealthiest nations could have set examples, but effectively abdicated the leadership role that could guide the round to success. The Doha Round must work toward creating a global public good, urges Ernesto Zedillo, director of the Yale Center for the Study of Globalization, and that requires designing a multilateral trade system with full reciprocity and non-discrimination among partners. Failure of the round – with nations resorting to favoritism and regional trade agreements – could threaten the WTO itself. Zedillo warns that a weakened WTO will create no winners. – YaleGlobal

Can the Doha Round Be Salvaged?

Failure to agree on market access could weaken the WTO
Ernesto Zedillo
Tuesday, May 9, 2006 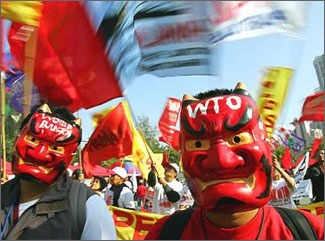 WTO doomed? Hong Kong protesters should be careful what they wish for

NEW HAVEN: The last week of April was a trying one for Pascal Lamy and the World Trade Organization (WTO), as negotiating failures hammered more nails into the Doha Round’s coffin. The director-general announced in Geneva that the round would not meet a self-imposed April 30 deadline for agreements on modalities for market access on both agricultural and non-agricultural products, agreements with an original and unmet deadline from more than three years ago. Repeatedly each of the round’s deadlines has been missed. Despite rare and brief episodes of progress, the story of Doha has been, to paraphrase Gabriel García Márquez, a chronicle of failure foretold.

The round encompasses a hazardous paradox: it was launched mainly because geopolitical factors and global public-goods considerations came into play, transcending purely mercantilist incentives; however, since the beginning, both the round’s agenda and negotiation dynamics obeyed the logic of mercantilist liberalization.

Given the much larger, more diverse country composition of the WTO as compared to the GATT’s in previous rounds, it should have been evident that the pure logic of mercantilist negotiations could not drive the new round and make it succeed. The approach of negotiating reciprocal concessions – which in the past usually led to win-win outcomes – could hardly achieve further trade liberalization when the WTO membership has so much variance of priorities and interests.

Deepening global trade liberalization became less of a traditional mercantilist undertaking and more about providing a global public good – in this case a multilateral trade system with full reciprocity and non-discrimination among all trading partners. This endeavor entails overcoming sovereignty issues and the temptation for some countries to wait until the others negotiate and then claim the most favored nation treatment – that is, the temptation to free ride on the system. If every country tries the same tactic, then collective agreement is impossible. In the absence of an otherwise undesirable global government, with the capacity to coerce countries into international agreements, creating conditions for the provision of global public goods depends not on sheer authority, but effective leadership. This stems certainly from power, but also from legitimacy grounded on clarity of purpose, willingness to move toward that purpose without waiting for others, and sometimes the willingness to contribute incentives for others to follow. So far the US, Europe and Japan have been reluctant to provide that kind of leadership.

On this side of the Atlantic, President George W. Bush’s White House reshuffling illustrates once again US disregard for the Doha Round. Just days before the WTO announced that it would miss the deadline the administration transferred Rob Portman, a former Republican Congressman with plenty of connections on Capitol Hill, from the US Trade Representative Office to the White House Office of Management and Budget after less than one year on the job. Portman takes with him any surviving hopes of mollifying his former congressional colleagues’ concerns regarding multilateral trade agreements.

Portman’s replacement is his former deputy, Susan Schwab, a competent trade-specialist, but lacking the congressional credentials and presidential access of her predecessor. Schwab claims that the administration still cares about Doha, but success depends on the president’s enthusiasm, not hers. With the president suffering in the polls and facing midterm elections, agricultural liberalization will more likely alienate rather than galvanize the electorate. With only days remaining in Portman’s tenure as USTR, sustainable and long-term American support for the round is questionable at best. In Washington, a city where proximity to power is valued above all else, Doha has lost this round of White House musical chairs.

Retiring Republican chairman of the House Ways and Means Committee, Bill Thomas, foreshadowed the election cycle free-trade discourse -- certainly not favorable to agricultural liberalization -- when in April he urged the Bush administration to shift focus to bilateral and regional trade agreements. Republican Senator Charles Grassley, chairman of the Senate finance committee, offered a latent threat to developing countries, stating that they “should know that a failure to reach an agreement in the Doha Round would further dampen enthusiasm in Congress for extending US preference programs.”

Further securing the cover on the round’s casket is the mid-2007 expiration of the president’s trade-promotion authority, or “fast-track” authority, which would expose any multilateral trade agreement to the notoriously protectionist American Congress.

In a symbolic demonstration aimed at countering such conclusions, Portman and Schwab made a joint visit to Brussels to shore up relations with the WTO and the EU. But if the Doha Round taught us anything, from its rocky start to failures in Hong Kong, concrete achievements mean everything and symbolic gestures mean nothing.

Plenty of reasons for pessimism emanate from Brussels. All other things being equal, the EU will continue to resist major cuts in agricultural tariffs and ask that a large number of products be designated sensitive, exempt from the general rules to reduce protection. The virtual straightjacket imposed by the Franco-German pact on the EU Common Agricultural Policy (CAP) reforms and the fall 2004 pact on the EU agricultural budget further dampen prospects for success.

But have recent events revealed chinks in the US and EU armor of negotiating inflexibility? In April, Portman suggested the US might be willing to go further than the farm subsidy cuts it has already tabled, while more recently, Peter Allgeier, US ambassador to the WTO, denied any policy change. Meanwhile, EU Trade Minister Peter Mandelson responded to Portman’s statement with his own limited expression of negotiating flexibility, “If the United States is similarly willing … to negotiate further on its agriculture offer, this is an important advance.”

British Prime Minister Tony Blair admitted that the CAP is a major obstacle to progress, but called for parallel American and Japanese reviews of agricultural subsidy programs. However, we should know better than to accept blindly the empty promises that have produced so little action since 2001. Even in a fantasy world, where negotiators could miraculously overcome these obstacles, the light at the end of the Doha tunnel would still be far away.

If the EU and G-10 countries were prepared to relent on agricultural protectionism, the G-20 would have to follow suit with painful sacrifices. Is Brazil, for example, ready to slash industrial and agricultural tariffs? Is it ready to make ambitious offers in services? Is it ready to give some preferences to LDCs? Beyond these issues, there’s the task of establishing a temporary “aid for trade” fund, satisfying poor countries’ need to address adjustment costs associated with the implementation of a truly reformist Doha Round.

Lamy and the WTO faced two options. They could have attempted to create a “Doha-lite,” agreement, with substantially watered-down agreements, but instead opted for the formal extension of the round, despite the unlikelihood of progress given the constraints and apathy.

The greatest long-term harm could be the reversion to regional trade agreements. If we head in that direction, the debate might shift from how the WTO can save the Doha Round to saving the WTO from the Doha Round. I cannot think of any WTO member that would win, now or in the foreseeable future, from a weakened WTO. Yet this is the reality to which world leaders must awaken while they still can.

Ernesto Zedillo is the director of the Yale Center for the Study of Globalization and former president of Mexico.