Can a White House Visit Shore Up a Sagging US-South Korea Alliance?

North Korea is the biggest common problem for both South Korea and the US, but the two presidents do not agree on strategy. As presidents Roh Moo-hyun and George Bush meet on September 14, their conversation could be awkward. Both men are stubborn about how to end the standoff over North Korea’s nuclear program: the Bush administration favors sanctions or even regime change, while Roh insists on a policy of engagement, economic enticements and gradual change. With such contradictory approaches, the Six-Party talks, which also include Japan, Russia and China, have floundered. North Korea once demanded direct talks with the US, but may have given up, considering that the global influence of the US president has diminished. Intelligence suggests that North Korea may be preparing for a nuclear test. The authors –Abramowitz, former ambassador to Thailand and Turkey, as well as US assistant secretary of state for intelligence and research, along with Bosworth, the former US ambassador to South Korea – warn that any real solution probably must wait, at least 27 months, for the governments that will replace the Roh and Bush administrations. – YaleGlobal

Can a White House Visit Shore Up a Sagging US-South Korea Alliance? 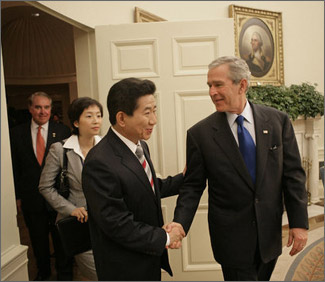 Smile for the camera? South Korean President Roh Moo-hyun with President Bush in the White House seeking to shore up a sagging relation. (Photo: White House)

WASHINGTON: As President Roh of South Korea calls on President Bush, he’ll get lunch, but certainly no tour of Graceland à la the prime minister of Japan. Indeed, both governments have anxieties about the visit. The US-South Korean relationship has not been as troubled, since Jimmy Carter announced 30 years ago that he was unilaterally taking American ground forces out of the Korean peninsula.

Both presidents are rigid, stubborn men. Both struggle domestically with sagging approval ratings and imminent elections. Both are lame ducks who have deeply felt – and contrasting – views about how to deal with their biggest common problem, North Korea. This division will grow as Washington seeks to further sanction and isolate North Korea. It could become a chasm if North Korea conducts a nuclear test as many fear.

Neither man wants to aggravate their differences: Both will hail the strength of their alliance and any congruence of views, perhaps trotting out some new small-bore initiatives that show the vitality of the alliance.

In fact, the two will discuss subjects other than North Korea in which progress is possible. Negotiations on a free-trade agreement have begun, not surprisingly beset by difficult issues with domestic political overtones, ranging from US prohibition of goods coming from the inter-Korean Kaesong Industrial Complex to South Korean demands that tariff negotiations exclude rice. The two presidents can push the negotiations forward. The stakes are large since failure to reach agreement over the next year would further strain the bilateral relationship.

Similarly the question of who should command South Korean forces in the event of conflict with the North garners attention. The US has proposed an end to current agreements under which the US would take operational command of Korean forces should the balloon go up. In this case, South Korea would remain in charge of its own troops. Roh Moo-hyun agrees with US Defense Secretary Donald Rumsfeld – the sooner the better – and reportedly said the transfer could take place as early as 2009. He frames the issue as a matter of South Korean “national sovereignty.” Many South Koreans, though, believe the shift marks a weakening of the American commitment and urge delay. Others suggest that Roh reaps what he sowed after criticizing US policies: American frustration with his North Korean strategy indeed has weakened US commitment.

The US national-security establishment often expresses impatience with South Korea, questioning why the US should station troops there if the Koreans do not want them. In part, this is a manifestation of the restructuring of US military presence globally. But it also reflects a shift in the fundamental dynamics of the peninsula: South Korea’s tremendous economic progress has left North Korea in the dust. South Koreans no longer fear the North. Quite the contrary, many regard the North as a basket case.

Still, more than anything else, what erodes the alliance is contrasting views on North Korea and its nuclear-weapons program.

Differences erupted at the beginning of Bush’s administration, after it abandoned the Clinton administration’s effort to engage North Korea on bilateral issues and carry out the Agreed Framework of 1994. The sharp break came with the Washington visit by former President Kim Dae Jung in March 2001. In effect, Bush told Kim that his “Sunshine Policy” of engagement, attempting gradual change of the North Korean system, was naive. Later that year, Bush elevated North Korea to membership in the “axis of evil.” Influential Bush administration figures continue to argue that the only way to deal with North Korea is through regime change. Roh, meanwhile, only deepened his predecessor’s policies. These differences in approach complicate efforts to resolve the nuclear issue.

The Bush administration’s efforts over five years to end North Korea’s nuclear-weapons program have gone nowhere. The US kicked the nuclear can down the road after Iraq, moving from the usual bilateral negotiations to Six-Party Talks on denuclearizing the Korean peninsula. The talks brought together the major powers of Northeast Asia on a major security matter, yet over three years produced just one joint statement of principles. The talks have not convened since November because of North Korea’s refusal to attend, supposedly because of financial sanctions US officials imposed on North Korea’s illicit activities.

A lack of operational substance in the negotiations is the inevitable result of sharp differences between China, South Korea and the US. The US professes interest in negotiating an end to North Korea’s nuclear program, but its actions reveal a desire for international pressure to provoke regime change or emulation of Libya’s abandonment of its nuclear-weapons program. South Korea and China shy away from more concerted pressures on the North for fear of provoking instability on the peninsula. While Washington tries to isolate North Korea, both Beijing and Seoul provide assistance, undermining any negotiating strategy that trades off economic benefits for ending Pyongyang’s weapons program. China and South Korea suspect that the US has been insufficiently forthcoming in its proposals and would prefer that the US negotiate bilaterally. Indeed, both nations privately question whether the US has any negotiating strategy.

Recent North Korean missile tests have shaken the region, particularly Japan, and led to a unaimous UN Security Council resolution condemning North Korea and calling on other countries to prevent import and export of missiles and related tchnology. Even its closest “friend,” China, supported Pyongyang’s greater isolation. There were hopes that this expression of international unity would lead to a common approach on restricting the North. After bombast and consultations, little has changed. Assistant US Secretary of State for East Asian and Pacific Affairs Christopher Hill traveled recently to the region in hopes of convincing North Korea to return to the Six-Party Talks. South Korea, too, expressed dismay over the missile tests, but resumed economic aid to the North, ostensibly because of massive flood damage. China continues to send envoys to Pyongyang, making no secret of its unhappiness with the Kim Jong-Il regime, but with little action.

The standoff is not sustainable, and events may come to a dangerous head. US efforts to squeeze Pyongyang apparently take precedence. Reportedly, the US will soon restore sanctions on trade, travel and investment lifted by the Clinton administration, which will hardly encourage North Korea’s return to talks. Moreover, recent intelligence suggests that a North Korean nuclear test is in the making. Kim Jong-Il may well have decided to forsake possibility of agreement with the Bush administration, going ahead with a test for strategic or domestic purposes. China would oppose such a test, but no one knows how much of a red line Beijing has drawn or whether it will be respected. Such a test would probably derail South Korea’s engagement policy and only widen the chasm between Seoul and Washington.

So the two presidents have much to talk about. Whether they’re candid is another matter. What happens with North Korea’s nuclear-weapons programs affects the security of East Asia, the US position in the region, and the relationship between the region’s two major powers – China and Japan. Continued escalation of the North Korean nuclear threat adds fuel to the resurgence of Japanese nationalism, a development already causing tensions in the area. Any chance for the US and South Korea to bridge differences must probably wait for new leadership in both governments. And while we sweat out a dangerous interim, North Korea will continue to increase its fissile material and nuclear inventory, or worse.