In recent years, certification – private regulation of corporate labor and environmental practices – has developed through complex interactions with and reactions to governments, NGOs, and corporations. Indiana University sociologist Tim Bartley traces this history and outlines the controversy surrounding the adoption of these standards. While critics view certification as thinly veiled corporate marketing, supporters consider it a logical compromise benefiting all parties; the truth may actually lie somewhere in between. Regardless, UN backing and World Bank endorsement suggest that the practice of certification by private agencies is here to stay as the newest method of governance of global trading. - YaleGlobal 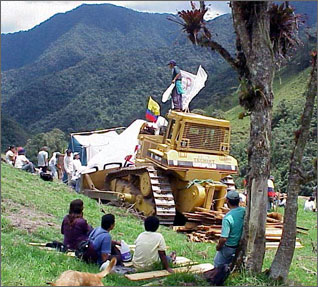 Protesters at a logging site in Ecuador: Certification by groups like Forest Stewardship Council could spare the trouble

BLOOMINGTON, INDIANA: Chances are that your favorite café sells coffee in bags labeled, “Fair Trade.” Or perhaps your new window frames carry an “FSC” logo, a stamp of approval from the Forest Stewardship Council. Behind these increasingly common phenomena lies a relatively new chapter in the story of globalization. Over the last 10 to 15 years, programs for certifying companies’ compliance with labor and environmental standards have sprung up in a variety of industries. Factories, forests, farms, fisheries, and more can now be certified as socially or environmentally sound. So why has the certification model emerged on such a broad scale at this particular time? The answer: After years of bruising fights, both companies and some of their critics have concluded that privatized regulation of business may be an attractive way out of the political controversy surrounding capitalist globalization.

The idea of certifying products based on their origins or manufacturing is not entirely new, but the recent trend toward certification has occurred on a broader scale and with a wider geographical reach than any of its historical precursors.

Some of the roots of the current trend lie in the intersection of a particular corporate strategy (“branding”) and a related set of strategies adopted by social movement groups, in which companies themselves become targets of protest, instead of or in addition to governments. Firms’ responses to tropical timber boycott campaigns in the early 1990s provided fodder for the creation of the Forest Stewardship Council (FSC), headquartered in Bonn, Germany, which was developed as an alternative to boycotts and a way to assess the credibility of environmental claims – or as one early developer put it, to “separate the wheat from the chaff.” Similarly, labor standards certification programs – like the Fair Labor Association (FLA) and Social Accountability International (SAI) – emerged in the mid-1990s, as high-profile apparel firms (e.g., Nike, Liz Claiborne) responded to campaigns highlighting sweatshops and child labor in their subcontracted factories. In each case, certification programs were initially created by loose coalitions of companies and NGOs (non-governmental organizations), and then imitated by industry associations hoping to have their own standards prevail.

Because of their connection to social movement campaigns, forest and labor standards certification have generated lots of controversy. Supporters have tended to see consumer recognition of the “good apples” as a chance to use market mechanisms to transform the global race to the bottom into a race to the top. Critics have often dismissed certification as just another corporate-constructed public relations scheme – a fig leaf for the continued exploitation of workers and the environment.

Both the critics and the supporters have often overlooked an important insight: Certification systems are more than just mechanisms for transmitting information to consumers, more than corporate “greenwash” or product differentiation strategies. They represent an emerging model of private regulation that resonates with other attempts to transfer the welfare and regulatory activities of government to the market, or redefine government on a “free market” model. Certification programs were created in part for political reasons, and there are some signs that they are beginning to be institutionalized as policy instruments.

Although protests motivated some large firms to help create the earliest certification initiatives, it is doubtful that these programs would have emerged on anywhere near their present scale had it not been for the work of two other actors – NGOs and governments. In fact, it seems that these actors have done for capital what capital could not do for itself: create credible and reliable systems of private regulation.

When it appeared in the 1990s that governments would be unable to enforce labor and environmental standards (which were being defined by free-trade advocates as "nontariff barriers" to trade), some environmental and human rights NGOs turned toward private forms of regulation. The environmental group World Wildlife Fund (WWF), for instance, has been called the “incubator and the surrogate mother” of the FSC. But it was mainly after WWF and other environmental groups failed to get a binding international forest convention passed at the 1992 Rio Earth Summit that they made forest certification a core project. In the labor standards case, NGOs like the International Labor Rights Fund and the Lawyers Committee for Human Rights seem to have increasingly turned toward private solutions after repeated failures to get labor standards tied to the core of GATT and NAFTA.

Governments have also played important roles in creating and/or funding certification systems. The governments of Austria, the Netherlands, Switzerland, and several other countries provided funding for the FSC, with Austria in particular donating roughly US$1.2 million at a critical early moment. In 1992, the Austrian parliament passed a law restricting the import of tropical timber unless it met certain conditions of forest management. The law was soon challenged as a barrier to trade under GATT. The Austrian government rescinded the law and then donated money from that program to the nascent FSC – a fascinating case of a government offloading regulation in response to rules about “free trade.”

In other instances, state support for private regulation has been shaped by powerful governments actively working to promote a free-market economic model. In the US, the Clinton administration directly created the Apparel Industry Partnership (which spawned the FLA) in the midst of a move to “reinvent government” and promote voluntary codes of conduct to smooth over some of the backlash against globalization. The administration also created a grant program that became a major source of funding for the FLA, SAI, and other labor standards programs.

The fact that governments have facilitated the rise of private regulatory systems reminds us that globalization does not make states irrelevant. Instead, government leadership and/or funding for certification resemble what Saskia Sassen has described in a different context as the state “incorporating the global project of its own shrinking role.” States still matter, but many core state elites have promoted an ideology in which they should appear not to, and they have sometimes supported private forms of regulation as part of this project.

While some have worried that private systems will “crowd out” government regulation, a more likely outcome is that the two will continue to interact with one another in complex ways. But importantly, private regulation is now a nearly ubiquitous component of debates about corporate social and environmental responsibility, raising the danger that governmental and inter-governmental programs will take the role of merely supplementing or facilitating private regulation, rather than embedding industry operations in democratically controlled regulatory structures.

Tim Bartley is an Assistant Professor of Sociology at Indiana University-Bloomington. He published a more detailed treatment of some of the issues raised here in the September 2003 edition of Politics and Society.