Less than a week after a recent Russian airline tragedy, a female suicide bomber attacked a Moscow subway station; evidence indicates that Chechen separatists were likely the perpetrators of both attacks. According to Russia analyst Ben Wetherall, the government's approach to the Islamic Chechen rebellion will determine the degree of success in preventing further violence. Outlining the tenuous relationship between the Russian state and separatists – particularly as Chechnya's new president takes office – Wetherall provides a historical framework for the political turbulence in the region. He warns that without earnest attempts at diplomacy, Russia's security and international interests will continue to be at serious risk. – YaleGlobal 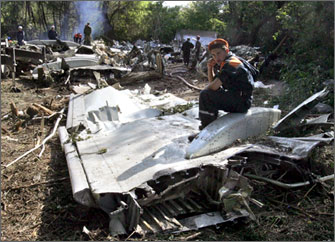 Chechen rebels may be responsible for the crash of two passenger jets. Can Russian diplomacy prevent future attacks? (Photo: AFP)

LONDON: The majority of Russians awoke the morning of August 25 to familiar scenes of bewilderment and confusion, as news emerged that two Russian domestic airliners had disappeared and crashed within minutes of each other. Eighty-nine passengers died; there were no survivors.

Though the airline tragedy has been confirmed as a terror attack, the perpetrators remain unknown. A group with links to Islamic jihadis in Pakistan has claimed responsibility for the attack. At the same time, forensic evidence suggests a notorious Chechen rebel group may be behind the attack. Regardless, the prevention of further terrorist attacks is fundamentally tied to Moscow's deftness in handling grievances of the Muslim-majority state of Chechnya.

Despite the obvious suspicions about terrorist involvement, the Putin administration initially seemed determined to discount that supposition – perhaps to avert critiques of negligent airport security and failure to acknowledge Chechen problems mere days before a scheduled election. Instead, the administration suggested a number of other theories, including industrial sabotage, human error, and technical failure.

In an unusual act of dissent, the Russian media told the administration that it would not tolerate any distortion of the truth. Air traffic control had received hijack warnings, and experts maintained that the chances of two aircraft going down simultaneously, hundreds of kilometers apart, were less than one in a million. The weight of physical evidence from the two crash sites made it even more difficult for the media to accept the administration’s alternative scenarios.

Chechen separatists have a long history of high-profile terror “spectaculars.” In the chaos surrounding the fall of the Soviet Union, Chechnya declared independence from Russia in 1991 and fought against Federal forces in two wars. The first conflict, between 1994 and 1996, was conventional in nature and largely successful for the Chechen rebels. After 1999, however, they became increasingly reliant on terror attacks. Particularly notable attacks include a series of Russian apartment bombings, which left over 300 dead; the October 2002 Dubrovka Theater siege in Moscow; and the more recent Metro bombing, also in the Russian capital. Traces of RDX, an explosive used in a number of these attacks, were found at both of the recent airplane crash sites. This evidence reinforces the belief that Chechen rebels were responsible for this atrocity.

Of those rebels, a likely suspect may be the radical Chechen warlord Shamil Basayev, a leading separatist figure with a long history of implementing large-scale terror attacks outside Chechnya. He was implicated in the Dubrovka siege, the Metro bombings, and a string of other attacks. He also boasts to have trained a brigade of female suicide bombers – the infamous “Black Widows” – willing to carry out attacks against Russian institutions, at any time and at any place. Investigators confirm that their focus on the remains of two female passengers: Amanta Nagaeva (who boarded the Tu-134) and Satsia Jebirkhanova (on the Tu-154). Close relatives of suspected Chechen rebels who were abducted or killed in the fighting, both women fit the “Black Widow” profile.

Basayev is also believed to maintain links to the al-Qaeda network. In 1995, he formed an alliance with the Saudi-born former Afghan jihadi Amir Khattab while founding training camps for disillusioned Chechen youth. The group’s exploits resulted in further funding, as Arab sources funneled ever-larger sums of money to the radical Islamic cause in Chechnya. In fact, on August 31 – two days after the Chechen elections – Vladimir Putin, at a meeting with German Chancellor Gehard Schroder and French President Jaques Chirac, announced a link between the suspected female suicide bombers and al-Qaeda.

Still, it is easy to overstate the extent of al-Qaeda involvement; while many foreign jihadis have come to Chechnya to fight federal authorities, the numbers are low compared to similar foreign involvement in Iraq and Afghanistan. Moreover, Chechen terrorists do not appear to desire indiscriminate holy war; their demands relate solely to the independence of Chechnya.

Divisions do exist, however, between the secular-nationalist Chechen rebel groups, led by Aslan Maskhadov, and the Islamist Chechen groups epitomized by Basayev and his allies. A combination of Russian military attacks against Maskhadov and the sheer volume of foreign funding to Basayev have helped his forces gain the upper hand.

The apparent global aspect of the Chechen conflict was highlighted when the unknown “Islambouli Brigade” claimed responsibility for the airline terror attack. The group had also claimed responsibility earlier this month for the attempted assassination of Pakistan's Prime Minister-designate, Shaukat Aziz. The confirming of these claims would indicate a worrisome extension of the Chechen conflict to a wider world. Already, Chechen rebel fighters are reportedly active in the tribal areas of Waziristan, on the border between Afghanistan and Pakistan.

Despite these reports, the evidence overwhelmingly indicates that the motive for the recent attacks is domestic. In the wake of August 29 Chechen presidential elections, the Putin government is desperate to ensure that nothing prevents the consolidation of the new Moscow-friendly leadership. A so-called “normalization” policy allows Chechens to assume responsibility for their own affairs while maintaining ties to Russia. Thus, Putin may withdraw troops from the region and announce the fulfillment of his inauguration pledge to bring Chechnya to heel. The policy also involves sidelining Chechens that favor independence, including Maskhadov and Basayev.

Russia’s failure to negotiate with the rebels is the reason for the assassination of the previous pro-Moscow Chechen president, Akhmad Kadyrov. And now, the newly elected pro-Moscow Chechen President, Alu Alkhanov has the most dangerous job in Russia. He must placate the Russian government, handle the hawks eager for war in Chechnya, and convince the majority of the Chechen population that he is not merely a Russian stooge. He must also maintain a close working relationship with Akhmad Kadyrov's son, Ramzan, who controls the Chechen security organs in the region and is the real power-broker. Alkhanov has stated that he will be willing to negotiate a solution with rebel leader Maskhadov, and this will add to the tensions with the younger Kadyrov, who will not want to relinquish his power or lucrative oil revenues.

Ultimately, a long-term solution in Chechnya can only be found by negotiating with the secular-nationalist rebels. The Russian policy of attack and isolation has succeeded only at increasing the credibility of radical Islamic groups. If a solution is not found, then another large terror attack may likely occur on international interests in Russia. A number of minor attacks have already been made on the main international oil pipelines that traverse the region, including the vitally important Baku-Tbilisi-Ceyhan (BTC) pipeline.

What does a recent escalation of Chechen attacks mean for security inside Russia and for international aviation? The Russian authorities have already heightened national security. But even if Russian authorities can improve their aviation security to a level comparable with that of Israel, the fact remains that Russia is not Israel; it is a country so vast that the “bomber will always get through.” If Russia is determined to stop Chechen terrorism, then at some stage it will have to negotiate with the very people it has demonized.

Ben Wetherall is a Research Analyst for Russia and CIS at the World Markets Research Centre.