A rising China since 1980 has changed the global trade landscape. The world’s leading manufacturer, the largest trading nation and second largest economy has displaced the United States from its traditional dominance. Roland Rajah and Alyssa Leng analyzed bilateral trade data from the International Monetary Fund’s Direction of Trade Statistics database, focused on exports and imports, and determined whether China or the United States is the larger trade partner for each country. In 2001, when China joined the World Trade Organization, more than 80 percent of nations with data had more trade with the United States. By 2018, more than 65 percent of nations had more trade with China. As of 2018, the US retained strong trade ties with European nations, Canada, Mexico, Central America and northern South America. “Driving this picture is that China’s economy is far more export driven than the US, it is deeply enmeshed in global supply chains, and has been growing much faster,” the researchers report. Also driving China’s rise was 2001 WTO membership, a once undervalued renminbi that boosted Chinese exports and the 2008 global debt crisis. – YaleGlobal

Trade statistics suggest that China has steadily displaced the United States as the leading trade partner for countries around the world
Roland Rajah and Alyssa Leng
Friday, March 13, 2020

Read the article from the Lowy Institute about shifting trade dominance from China to the United States. 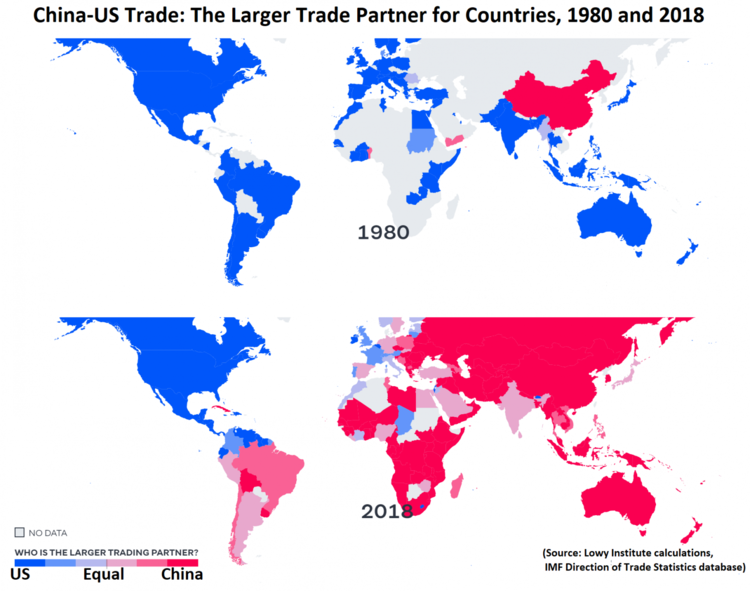 Shift: In 1980, the United States was the larger trade partner for all but a few nations; for 2018, more than 65 percent of nations reported having more trade with China. (Source: Lowy Institute)