“HK is not China.” The scrawled message on a pillar of Hong Kong’s legislative hall, stormed by protesters, encapsulates the city’s quarrel with China. Protesters oppose legislation allowing extradition of Hong Kong citizens to China for judicial proceedings. China could become impatient with Hong Kong’s leaders for not putting a quick stop to the massive protests attracting global attention, and the violent turn also could weaken international support for the protests and strengthen China’s hand in pointing to the need for an extradition law. “The State Council’s Hong Kong and Macau Affairs Office along with Beijing’s liaison office in the city joined the pro-establishment camp and business chambers in condemning Monday’s violence, even as pro-democracy groups and opposition lawmakers struck a softer tone, saying the government was also to blame,” reports South China Morning Post. Officials suggested the storming of the legislative hall “is a blatant challenge to the bottom line of ‘one country, two systems.’” Hong Kong’s leader has vowed to prosecute the protesters who damaged the hall, while pro-democracy leaders worry a crackdown could bring even more violence. The divisions are sure to disrupt Hong Kong’s economy. – YaleGlobal

Read the article from South China Morning Post about the protests in Hong Kong. 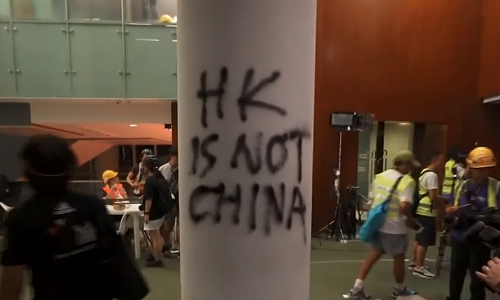