China and the US: To Hedge or Engage

Despite extensive cooperation between China and the US, both countries remain suspicious of each other’s intent. The result has been, from the US side, a policy of hedging all the while engaging with China. This arms-length approach may not be good for either country’s interest or the interest of stability in Asia. David Shambaugh and Karl Inderfurth, China and South Asia analysts, respectively, and professors of international affairs at George Washington University, suggest that both countries could expand their cooperation. Asia offers many opportunities for engagement on issues of energy security and regional stability, particularly with India, Pakistan, Afghanistan and Central Asia. Cooperation and engagement decrease possibilities of conflict and its costs for both China and the US, while boosting diplomatic influence and mutual economic benefits. – YaleGlobal

China and the US: To Hedge or Engage 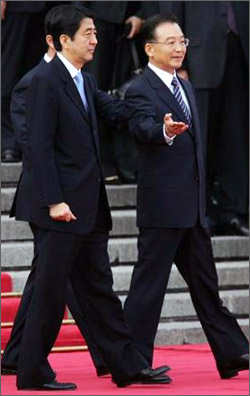 WASHINGTON: Some of the discourse about China in Washington suggests that America has identified its Next Great Enemy. On balance, though, this complex relationship is characterized by substantial cooperation on bilateral, regional and global issues. Yet, despite this cooperation, each remains suspicious of the other’s motives and actions.

China worries about US attempts to encircle it strategically with security alliances and partnerships, backed by a substantial military buildup in the South Pacific and Indian oceans – actions that the US government describes in official policy documents as prudent “hedging.” For its part, Washington worries about China’s military modernization program, economic dynamism, expanded diplomatic influence across Asia and increased global search for energy resources. 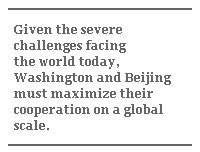 While this paradoxical mix of relations is likely to persist, more engagement and less hedging is needed. Given the severity of the challenges facing the international community today, it is increasingly important that Washington and Beijing maximize their cooperation on a global scale. While the US and China are increasingly interacting on all continents, the most promising area of Sino-American collaboration is in Asia.

Dealing with some challenges, notably the North Korean nuclear issue, has already benefited from policy coordination, but much more can be achieved to effectively manage the medium- and long-term issues confronting the region. The February 13, 2007, agreement is a significant step in freezing North Korea’s nuclear weapons program. But if the freeze is to turn into a denuclearization, if North Korea is to be stabilized and brought into the world community, and if a lasting peace on the Korean Peninsula is to be achieved – active cooperation between Beijing and Washington is mandatory.

The US also could do more to involve China in regional security architecture. For a number of years, the US alliance structure in East Asia (with Australia, Japan, the Philippines, Republic of Korea and Thailand) has been the core of the regional security framework, supplemented by a series of more recent bilateral security arrangements struck with several non-allied states throughout Asia (Kyrgyzstan, Uzbekistan, Mongolia, Malaysia, Singapore, India and Pakistan).

However pervasive this US-led regional security architecture may be, it is not complete without China’s involvement. Some recent signs of improved US-China security cooperation have emerged – including the visit of Joint Chiefs of Staff Chairman General Peter Pace to China in March, who agreed to an expanded set of bilateral and multilateral military exchanges.

Another opportunity grows out of the interim North Korea agreement. A working group is exploring a possible Northeast Asia Security Mechanism, which could both serve to ensure North Korea’s security and also potentially turn the Six Party Talks into a new sub-regional security mechanism that would supplement the existing US alliances and draw Beijing, Moscow and Pyongyang into a partnership to stabilize this critical part of the world.

When it comes to the ever-sensitive issue of Taiwan, Beijing and Washington have, since 2003, coordinated their approaches towards the Chen Shui-bian government, working together to contain its independence impulses and stabilize the Taiwan Strait. Recently, however, the Chen government has taken a number of unilateral steps to further strip Taiwan’s historical links to China from its official identity. These are serious provocations and require Beijing and Washington to deal with them prudently, yet not over-react.

Washington and Beijing also have mutual responsibilities to improve Japan’s role in the region. Chinese Premier Wen Jiabao’s visit to Japan this week is an important effort to improve badly deteriorated bilateral relations. Yet Japan cannot acquire credibility as an Asian or world power until it effectively comes to terms, in a sustained and public fashion – such as Germany has done – with all dimensions of its World War II atrocities. It is in US national interests to encourage Japan to come to terms with this persistent problem.

Asia’s security agenda also increasingly involves a broad range of “non-traditional” challenges: nuclear nonproliferation; natural resource management and environmental protection; securing financial markets and electronic transactions; improving cooperation among regional public health authorities to deal with the threat of pandemics and infectious diseases; quickly providing humanitarian relief to earthquake or tsunami zones and other natural disasters; port security; security of energy supplies and overland and water-supply networks; and countering terrorism, narcotics smuggling, piracy, organized crime and human trafficking. The US and China have only begun to scratch the surface of cooperation in these vital areas.

Turning to South Asia, the dramatic improvement in US-India relations takes place against the backdrop of Sino-Indian entente, as well as thickening US-China ties. The task of all three nations is to manage ties as a virtuous circle rather than a competitive triangle. Two core concerns for all three nations command cooperation: energy security and regional stability.

The US and China are the world’s two largest importers of energy, while India is sixth. China and India signed an agreement in 2006 to promote collaboration between Chinese and Indian enterprises for joint exploration and development in third countries. It behooves all three to work together and not try and “lock up” energy supplies.

To head off the possibility of a new destabilizing Great Game in Central Asia, China, India, and the US should begin working together to jointly promote regional cooperation. This can take place bilaterally, trilaterally or through the Shanghai Cooperation Organization, Central Asia Regional Economic Cooperation forum and the South Asian Association for Regional Cooperation.

In promoting regional stability in South Asia, both the US and Chinese governments should use their positive ties with India and Pakistan to encourage their ongoing efforts to normalize relations, implement new confidence-building measures and resolve their longstanding dispute over Kashmir.

The United States and China should also use their close ties with Pakistan to prevent repeat of the A.Q. Khan nuclear proliferation scandal. Both should assist Pakistan to take those steps necessary – through enhancing export controls and enforcement capabilities – to safeguard and secure its nuclear stockpiles. Both have an equally strong interest in seeing Pakistan follow the path of “enlightened moderation,” as called for by its present leadership, to become a progressive and prosperous state.

Finally, the US and China have a vital interest in a secure and stable Afghanistan that does not again become a haven for Islamic extremists or international narco-traffickers, with possible spillover into China’s western provinces. To date, the US and NATO have shouldered the military burden in Afghanistan; China should step up its assistance in providing security through contributing police and greater development assistance.

These real and potential areas of Sino-American cooperation throughout Asia should provide insight into the merits of hedging versus engaging China. The US needs to engage more and hedge less. US hedging begets counter-hedging by Beijing and, in any event, creates the perception of an encirclement and semi-containment policy led by Washington. In addition to straining relations with US friends and allies, such geopolitical maneuvering can quickly manifest security dilemmas and risk escalation of unforeseen crises. Failure to cooperate on these challenges could prove a lose-lose scenario for the United States, China and Asia in the years ahead.