China Bids for the High Ground

The world may seem a little smaller to China soon - especially as viewed from outer space. The Chinese government plans to launch a manned space capsule in the next few weeks, closing a technological gap with Russia and the US that no other country has crossed. Joan Johnson-Freese, an expert in Chinese space technology at the US Naval War College, believes that to understand the implications of the launch, four key questions need to be considered: Why are the Chinese pursuing a manned space program? How much is it costing them? Will the upcoming manned launch be successful? What will be the reaction of the American public to a successful Chinese launch? The answers to these four questions are likely to influence US technology and defense interests, as well as policy makers in Washington and around the globe. A successful launch could bring a multitude of benefits to China, similar to what the Apollo program did for American scientific advancement. But, cautions Johnson-Freese, while "Success in the heavens is spectacular… so too is failure." - YaleGlobal

China Bids for the High Ground 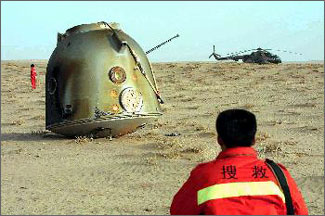 "Divine Vessel" capsule returns after a test launch: The hope of reaping worldly gain from a Chinese citizen in space.

NEWPORT, USA: As the countdown clock ticks away, best-guesses have set the Chinese launch of their first taikonaut, or yuhangyuan, into orbit on or around October 15, 2003. The date, however, is still uncertain since the Chinese always maintain some ambiguity to "save face" if difficulties occur. The Shenzhou V - "Divine Vessel" - capsule will be launched into orbit by a Long March (CZ) 2F rocket. That event will make China the third country in the world to have a manned space capability, joining the exclusive club of the United States and Russia.

The Chinese space program is an ambitious one. (See "Chinese Astronauts to Compete for Final Frontier"). It is also one which has generated interest, concern, and questions in the United States and throughout the world. Although China generally, and China's space program specifically, are often shrouded in secrecy, the interesting and difficult part of answering these questions is not necessarily in finding information, but in interpreting the information available. China is a country of such size and complexity that analysts can find evidence for any hypothesis they seek to advance. Additionally, since space technology can be applied to both the civil and military arenas, accurately judging the technology's significance is complicated.

Some US analysts see China's manned space activity as a Trojan Horse within which they can conceal their military space activities. Others see it as a prestige program for the country, acknowledging that such prestige includes domestic legitimacy for the government, regional leadership, and internationally "playing with the big boys." The US Apollo program, for example, had multiple goals: reaching the Moon in the Cold War race against the Soviets for eminence and technological development (with a military spillover), as well as employing lots of Americans and improving their technological skills and education along the way. The Chinese have clearly read that play-book, and there is considerable evidence that they seek all of the same objectives. 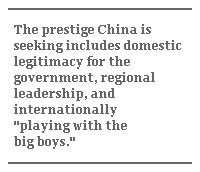 The second question often asked is, "How much are they spending on their program?" Though the Chinese do not release budget figures, estimates from US analysts are about $2.2 billion annually. But what can one conclude from that figure, especially when compared to NASA's $15 billion budget? The answer is nothing. The comparison is meaningless when one considers China's command economy, difficulties with currency conversion, and the fact that China deliberately over-employs people in state-owned enterprises to keep unemployment down. The best that can be said, based on their commitment to the program, is that China is spending relatively significant government resources. Interestingly, the same factors that make comparisons impossible may also enable China to maintain the political will to develop space stations, lunar bases, and even missions to Mars - goals that China has publicly stated it wants to pursue. Ultimately, however, political will can only be sustained by one thing - success.

The will to succeed raises the third question: Will the first manned Shenzhou launch be successful? Such a question inevitably leads to issues of technology. Is the Shenzhou capsule a copy of the Russian Soyuz-A? Are the Chinese merely copying the earlier technological breakthroughs of the US and Russia? What would a successful launch mean in terms of gauging Chinese technical - read military - capabilities? The technology questions are the ones most subject to analysis-through-a-prism. Predetermination of what you're looking for can lead you to your findings. 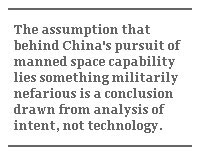 The Shenzhou capsule bears an uncanny resemblance to the Soyuz-A. Like Soyuz, Shenzhou has three components: a forward module to hold experiments or act as a crew transfer module, the manned module, and a rear service module housing the propulsion system. The primary external difference is that the Shenzhou forward module has solar panels, which allows it to detach and remain in orbit, potentially docking at a later time. Shenzhou III left its forward module in orbit for six months before the module was deliberately destroyed during reentry. Does this mean that the Chinese have "merely" copied the Russians and therefore one can dismiss claims of technical prowess? No.

External designs vary, but just as different models of cars and planes have similarities, so do rockets. The Chinese have long taken advantage of learning from the experience of others, rather than constantly reinventing the wheel. But that doesn't mean building rockets is easy. Although constructing a rocket is relatively straightforward, it does require incredible attention to detail, which can only be learned by experience. It is in rocket engineering that the complications begin, especially when the design must work the first time it is used. The stakes are even higher when the rocket is designed to carry a human payload. So if the Chinese are able to pull this off successfully, it will mean that they have achieved very complex levels of rocket engineering; otherwise, the exclusive club would likely not be so exclusive.

Moreover, although attention to detail is required whether the payload is a satellite or a person, it is the number of details and the "cost" of failure that changes. Rocket science, the physics behind the operation of a missile or launch vehicle, was developed over 60 years ago and is contained in textbooks published in every conceivable language. Therefore, the assumption that behind China's pursuit of manned space capability lies something militarily nefarious is a conclusion drawn from analysis of intent, not technology. Ironically, Western analyses sometimes dismiss China's technological accomplishments in one breath, and see dire consequences in China's manned space launch for the United States in another.

Such contradictory assessments lead to a final, important question, which has not often been asked so far: "What will be the reaction of the American public to a successful Chinese manned space launch?" Washington was surprised by the public's stunned response to Sputnik. Though a technological "blip," Americans saw it as threatening their security and global stature, and the government was forced to respond in ways it had not anticipated.

Few Americans are even aware that the Chinese are preparing the launch of Shenzhou V. When it occurs, what will they think? That it will likely occur while the US shuttle fleet is grounded will magnify how the US and the world perceive China's technological achievement. Certainly, some in Washington will react by claiming that the launch requires the US to spend more money on space - military space. In policy circles, its perceived strategic importance could also chill recently-warmed US-China relations. But will it also trigger a demand to re-invigorate the US manned space program? At the moment, although an austere version of the International Space Station is in orbit, it has been a stepchild while military space has ascended in importance. Maybe the launch will generate nothing more than a passing interest from the US public.

If China successfully launches a taikonaut into orbit, it will "win" in all the ways the United States did during Apollo. If the launch is not a success, China will suffer and mourn just as the United States did after the loss of the Challenger and the Columbia, and then it will rethink whether to continue with the program or not. Success in the heavens is spectacular, but so too is failure.