China Can Gain from Unshackling its Currency

A significant lobby in Washington is pressuring Beijing to revalue its currency relative to the US dollar, claiming that the artificially low renminbi gives China an unfair competitive advantage. To be sure, Chinese resent the pressure and worry that an appreciation of the renminbi relative to the dollar would raise the price of Chinese goods and curb its dominance of the export market. But in reality, writes Rob Trudel, the issues are not so cut-and-dry. "Fundamentally lost in the current debate over the currency peg is any consideration of the positive effect on the process of financial liberalization in China." China's twin policies of restricting capital flows and undervaluing its currency actually restrict the country's ability to open its economy. Were Beijing to simultaneously – though discriminately – relax these policies, many parties would benefit. "The potential gains from financial liberalization are large for both China and foreigners," he says. And before escalating pressures force a hasty decision, concludes Trudel, "The time is ripe for Beijing to make a move now." – YaleGlobal

China Can Gain from Unshackling its Currency

Washington's pressure may be unwelcome, but a revaluation of the renminbi could ultimately benefit China
Rob Trudel
Friday, April 8, 2005 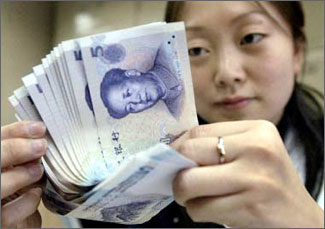 Money talks: China resists pressure to revalue its renminbi, but it could be good for financial liberalization

NEW HAVEN: As the US trade deficit continues to mount and Chinese exports surge, angry voices are rising on Capitol Hill, urging punishment of Beijing for its undervalued currency. Critics suggest that the peg artificially depresses the renminbi – affording China what many see as an unfair competitive advantage in exports. The growing anger over Chinese export risks triggering a new trade war if some in the US Congress have their way. On Wednesday, the US Senate voiced its objections, passing a measure supporting trade sanctions should China refuse to unshackle its currency from the dollar.

But revaluation is not as unambiguously beneficial to the US – nor unequivocally detrimental to China – as political rhetoric might suggest. If China revalues, other Asian countries that have held down their currencies in order to remain competitive against China would likely stop intervening, allowing appreciation against the dollar. In turn, the demand for US Treasuries – currently stockpiled in Asian reserves – will fall off, and US interest rates will rise. Though the competitiveness of American exporters (who have been vocal in blaming China's peg for their problems) would increase in the short term, a rapid rise in interest rates could precipitate a slowdown in interest rate-sensitive sectors, threatening overall US growth.

Fundamentally lost in the current debate over the currency peg is any consideration of the positive effect on the process of financial liberalization in China. Financial liberalization is not only a sine qua non for long-term success for China's long-term success but it would also open up greater opportunity for foreigners to invest in China. As long as China maintains its currency peg at its current level, it cannot comfortably lift its restrictions on capital flows. Those restrictions prevent China from opening its equity and debt markets to foreign capital – steps that the government suggests will improve liquidity and corporate governance and gain respectability for China's financial markets. Further, a revaluation and financial liberalization will likely cause significant changes in patterns of world capital flows and trade.

Financial liberalization in China will create uncertain, but potentially large, capital flows, as foreign investors move money into China and Chinese investors diversify into foreign markets. The potential gains from financial liberalization are large for both China and foreigners. Allowing foreign investors to purchase Chinese securities would enable Chinese companies to tap a much broader pool of capital, and would allow foreign investors access to a market many are eager to enter. Also, opening Chinese financial markets would further the agenda of government advocates of market-based credit allocation.

So what would happen if China were to remove capital controls while maintaining the peg at its current level? Currently, capital controls prevent most foreign investors from purchasing renminbi-denominated assets and limit the holdings of the few foreign institutions allowed into the market. Were these restrictions lifted, it would open the door for speculators to buy renminbi. Given the large potential gain, investors would likely seize this opportunity en masse – forcing the central bank to either borrow or print more renminbi. These options have undesirable effects: More debt requires the government to divert more of its revenue to interest payments, and large-scale money creation leads to higher inflation. In turn, the peg would appear ever less sustainable – and in a vicious cycle, more speculative foreign capital would flow in. If this cycle materialized, the Chinese government might feel forced to revalue the renminbi before its export-oriented industries adequately prepare to cope with the resulting loss of competitiveness. Because China's already undercapitalized large banks have large loans to these industries, the financiers' distress would reverberate throughout the economy.

To be able to comfortably allow capital mobility, China would need to allow its currency to trade at a value reasonably near what a free market would set. Although the government could decrease the interest rate in order to lower speculators' expected returns on forward positions in the renminbi, a lower interest rate would lead to further increases in growth and inflation, which would only weaken the peg further. Only when the currency trades close to its fair value will net speculative flows be small.

The Qualified Foreign Institutional Investor (QFII) scheme is one of the limitations the peg currently imposes on financial liberalization. The QFII scheme allows foreign institutional investors to trade on China's financial markets, but restricts them to a quota of renminbi. It was hoped that allowing foreign participation would speed development of China's financial markets, but these benefits have not materialized, as the foreign investors allowed into the Chinese markets have kept much of their quotas in bank accounts rather than investing in Chinese stocks and bonds. This result is due at least in part to the incentives and limitations imposed by the peg at its current level. The government is forced to keep the QFII quotas small in order to prevent large capital inflows, and foreign investors are content to keep their quotas of renminbi in cash in order to either speculate on a revaluation at a lower cost than they can in offshore markets or make a risk-free profit from the premium that speculators pay to bet on a revaluation in offshore markets.

A revaluation is necessary to address both sources of the ineffectiveness of the QFII scheme, and more generally to make meaningful financial liberalization in China possible. A revaluation will allow the government to relax capital controls, increasing the total amount of foreign capital that can enter Chinese markets, and will remove the incentive for foreign investors to keep their renminbi in cash. Although foreign capital is not a panacea for China's problematic capital markets, the restraining effect of the peg on financial liberalization is costly. The Chinese authorities seem to believe that foreign participation would be beneficial, but their efforts to design a framework for opening their economy have not recognized that financial liberalization is hostage to currency revaluation.

The much-discussed arguments for and against the maintenance of the peg at its current level remain valid. A revaluation would render China's export-oriented businesses less competitive on world markets, and their distress would worsen the already significant non-performing loan and undercapitalization problems at China's state-owned banks. On the flip side, revaluation would help lower growth to a more sustainable rate and slow inflation. To these considerations, we must add that a revaluation would enable meaningful financial liberalization, a goal the Chinese government has identified but has not been able to really pursue. In the end, the issue of currency revaluation is not as simple as "good" or "bad," for China or for the United States; there are benefits and risks to both countries. But the time is ripe for Beijing to make a move now, before the escalating pressure from Washington potentially forces it to choose between appearing to capitulate to US demands by revaluing, or acting against its own interests by standing firm.

Rob Trudel is a senior at Yale University, majoring in Economics and Political Science.