Will the 21st century see China become a strong but benevolent superpower? Since late 2003, top-level Chinese officials have used the term 'peaceful rise' to describe an ideal growth plan for Chinese economic, political, and military expansion. Whatever the future evolution of this blueprint for Chinese development, says political scientist Evan S. Medeiros, it is noteworthy that the term itself has been publicly debated by Chinese officials, scholars, and analysts. Some within China argued that the use of 'rise' could intimidate other Asian countries and the US, who do not want to see Beijing become a center of concentrated power. Others opposed the term 'peaceful', fearing that it could encourage pro-independence groups in Taiwan. The debate over what has become a key signifier of China's foreign policy is encouraging, says Medeiros, as it indicates a degree of openness that has been rare in Chinese policy making. But the implications of the policy remain ambiguous, especially for Taiwan, which Medeiros says is "the litmus test of China's future role in global affairs" for the US and for many of China's neighbors. If China is able to ensure that its rise is indeed 'peaceful', the entire region – and the world – will be better off for it. – YaleGlobal 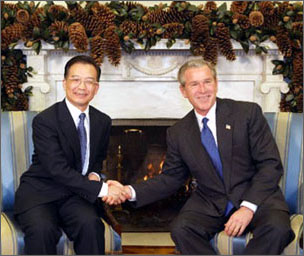 Wen Jiabao and George W. Bush were all smiles in Dec. 2003, but will Wen's 'peaceful rise' policy quiet talk of a 'China Threat'?

WASHINGTON: China recently conducted a quiet but important policy debate over the country’s strategic direction in global affairs. In newspapers, magazines, and internal papers, Chinese officials and scholars argued whether the concept of “China’s peaceful rise” (Zhongguo de heping jueqi) should be adopted as the motto for its rapidly expanding role in international politics. This debate, which may continue, serves as a reminder of China’s active effort to shape external perceptions as Beijing’s power and influence expands.

Beginning in late 2003, senior Chinese leaders and prominent analysts began promoting the notion of “peaceful rise” (heping jueqi) as “the new pathway” (xin daolu) and the strategic choice for China in the coming decades.

Recognizing that China’s influence in international economic and security affairs is rapidly increasing – and that this is generating concern among major powers and Asian nations alike – Chinese leaders have begun pitching this new line to policymakers all over the world.

“Peaceful rise” is China’s way of acknowledging the historical problems associated with being a rising power and signaling to the world that Beijing seeks to manage this process to prevent conflict. In many ways, the promotion of this idea is China’s long delayed answer to the “China Threat” debate and the efforts by other countries to define China’s future global position. Following Premier Wen Jiabao’s first use of the term at a speech at Harvard University in December of last year, the phrase “peaceful rise” rapidly became part of the new Chinese lexicon for talking about its evolving role in world affairs.

Chinese policymakers and analysts argue that, as China rises, it seeks to avoid the competition-inducing policies of Weimar Germany, Imperial Japan, and the Soviet Union in the Cold War. According to Zheng Bijian, the main architect of this theory and a former senior government official with strong Party credentials and links to the current leadership, “The only choice for China under the current international situation is to rise peacefully, namely, to develop by taking advantage of the peaceful international environment, and at the same time to maintain world peace through its development.”

Yet, acceptance of this new term within China was not a fait accompli, despite such high-level endorsement. Unlike in past years when the Communist Party was the dominant force in foreign policy discourse, 'peaceful rise' did not automatically enter China’s vaunted orthodoxy of foreign policy expressions like “peace and development” and “one country, two systems.”

Rather, many Chinese scholars and analysts questioned the meaning and accuracy of the new expression. International observers have also begun to notice some of its weaknesses, such as its unclear and potentially contradictory treatment of the Taiwan issue.

China’s internal debate centered on a few arguments. Many opposed the use of the term “rise” (jueqi) arguing that China is not rising and will not rise given the myriad of economic and social problems complicating its transition from a planned to a market economy. They argue it is too early to talk about rising, which is a far too optimistic characterization of China’s current socio-economic evolution.

Others in China objected to the use of “rise” because it connotes a China-led “power transition” in the region and possibly the emergence of a new power center in Asia. Such terminology would do little to assuage concerns of neighboring nations.

Furthermore, a small, but vocal minority opposed China’s commitment to a rise that is peaceful. This group, which did not just include the military, argued that committing to a peaceful rise could undermine China’s ability to deter Taiwan from moving towards formal, legal separation from the Mainland. Cross Strait relations continue to grow tenser and more militarized, and few in Beijing trust any of the commitments of Taiwan’s leadership. Thus, it is argued in China, this new strategy would send the wrong signal to Taiwan during a highly unstable period.

In May this year, a turning point in the debate on peaceful rise occurred. During a speech at the Boao Forum for Asia held on Hainan island, China’s version of the annual World Economic Forum, China’s President Hu Jintao used the expression “peaceful development” (heping fazhan) to refer to China’s external strategy. This articulation likely set the marker on the official expression. Hu’s non-use of the term “rise” indicates his agreement with analysts who favored a less confrontational phrase. To be sure, it is still too early to know whether the new expression will traverse the increasingly bumpy road from academic lexicon to Party orthodoxy, or will end up in the Communist Party’s overflowing dustbin of meaningless expressions.

To some extent, China’s internal debate is encouraging. It provides further evidence of increasing openness in foreign policy thinking and in official policy formulation. Chinese leaders are actively seeking input and guidance from analysts with extensive training, expertise and experience in regional and international affairs. In this one instance, debates among officials, analysts, and scholars shaped (and are continuing to influence) official foreign policy guidelines like peaceful rise.

China’s formulation and articulation about peaceful rise, however, leaves Taiwan as a looming contradiction. In discussing the implications of peaceful rise for the Taiwan issue, most Chinese commentators view Taiwan as an exception. Some officials and scholars firmly argue that Taiwan is strictly a domestic issue that foreigners intrude into. A larger body of scholars and analysts highlight China’s strong national sentiment for reunification and the leadership’s stated willingness to bear “any costs” for that goal – regardless of the implications for Beijing’s strategy of peacefully rising. 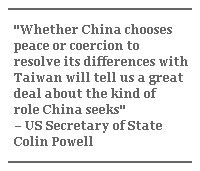 Yet, for many US policymakers and analysts, Taiwan is the litmus test of China’s future role in global affairs. China’s resolution of the Taiwan situation is one of the most important indicators of how China will use its growing economic influence, diplomatic skills and military might to shape international affairs in the future. According to a November 2003 speech by Secretary of State Colin Powell, “whether China chooses peace or coercion to resolve its differences with Taiwan will tell us a great deal about the kind of role China seeks with its neighbors and seeks with us.” Thus, the differences between US and Chinese perceptions could not be starker.

Some of China's neighbors, such as Japan, Southeast Asia, and India, likely share Washington's assessment. While most warmly welcome the growth-inducing effects of Taiwan’s economic integration with the mainland, all of them maintain strong security ties with the US and continue to gradually modernize their defense forces. If a military conflict over Taiwan erupted, it is not difficult to envision a scenario in which regional concerns about China’s willingness to use force to resolve outstanding territorial disputes in Asia would become a prominent driver of foreign and military policies in the region.

The future evolution of China’s new external strategy of peaceful rise is unclear. It reflects an encouraging recognition by Chinese policymakers that they need to define how China will use its expanding global influence in ways conducive to regional and global stability. Regardless of how peace-loving the Chinese people feel they are, Chinese leaders need to take into account the legitimate concerns of its Asian neighbors and major powers in the region. Whether Chinese leaders can translate this new expression into tangible policies and deeds of reassurance remains an open question.

Evan S. Medeiros is a political scientist in the Washington, DC office of the RAND Corporation, a non-profit research organization.