Latin America is rich in natural resources, including oil, minerals and agricultural crops, all desired in the global markets. At the same time, China has become the world's largest importer of cotton, copper and soybeans as well as the second-largest oil importer. Latin America can secure lasting advantages from its commodities sales – including poverty reduction and sustainable development – with policies that offer transparency. Economist Georg Caspary offers recommendations on how the region can benefit from its natural resources: Because the region requires foreign financing, countries must eliminate investor uncertainty by setting solid policies on infrastructure investment. Commodity payments must follow a transparent path, to prevent waste or even corruption, and exporting countries must set out balanced conditions, designed to protect citizens and the environment without deterring investors. And finally, resource-rich countries must follow the age-old rule of diversifying their economies. Countries with diverse economies can command higher prices for their commodities and control their destiny. – YaleGlobal

The region must adopt careful policies to meet the rush of customers
Georg Caspary
Friday, January 18, 2008 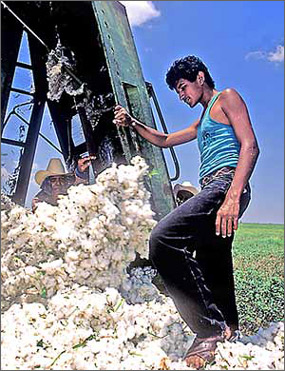 WASHINGTON: Latin America is increasingly attractive as a source for large emerging economies with rising commodity import needs. The recent large find of oil and gas in Brazilian waters has only added to that attraction.

Thus, with their large reserves of commodities, especially non-renewable resources in high demand from the global market, Latin American countries should be in the catbird’s seat, calling shots and setting prices. Yet, despite the allure of the region for resource-hungry emerging economies like China, the cards are not necessarily stacked in Latin America’s favor. Unless the region develops policies of sustainable development and transparent transactions, the advantages it enjoys from its riches could prove to be limited.

Latin America produces 47 percent of the world’s soybean crop, 40 percent of copper and 9.3 percent of its crude oil – and in five years Brazilian oil will add to that. China needs an increasing amount of such commodities both as inputs in its fast industrialization process and for private consumption, given the nation’s rapidly rising living standards. Its commodity imports are set to rise at lower double-digit rates until at least 2020. Annual average oil and copper import growth rates have recently been 10 times higher than average import growth rates for the rest of the world. 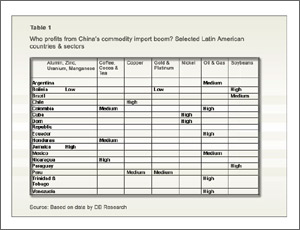 Thus, China has become the world's largest importer of cotton, copper and soybeans and the second-largest oil importer, and increasingly looks to Latin America for resources. For instance, Chinese soy imports from Brazil and Argentina alone have increased tenfold from US$360 million to US$3.6 billion between 1999 and 2004. Chile and Peru, the world’s leading copper producers, account for about 50 percent of China’s copper imports. According to recent data by DB research, Venezuela, Colombia, Trinidad and Tobago, and Ecuador benefit from oil and gas exports to China; Chile from copper exports; Nicaragua from coffee, cocoa and tea exports; Paraguay and Bolivia from soy exports; and Cuba and the Dominican Republic from nickel exports.

While this holds promise for Latin America, it also leads to a number of challenges that policymakers must address. While oil, mining products and agricultural resources pose similar policy challenges, certain differences between these two ”types” of resource wealth should be borne in mind, including high current world-market prices for oil; the non-renewable versus renewable nature of both types; and the average number of stakeholders – requiring different approaches in benefits sharing.

First, if Latin America is to continue to profit from this commodity-export boom, investor-relations issues must be addressed. Investments in supply infrastructure for hydrocarbons are urgently needed, given that supply infrastructure investments for key commodities such as coal, oil and gas are lower in Latin America than in any other region. Simply put, exploration, production and transportation of oil and gas must be upgraded and expanded.

In other words, policymakers must address the relative uncertainty that pervades some commodity markets in the region. Latin America has the highest incidence of infrastructure projects being cancelled or considered “under distress,” according to international databases on private investment in infrastructure. China might be, relative to the West, targeted less by radical rhetoric of leaders such as Hugo Chavez, but the nation is still a savvy investor that will ultimately allocate investments on the basis of predictions of risk-adjusted return.

Second, China’s increasing involvement on the continent increases the need for transparency in commodity payments. While Organization for Economic Cooperation and Development (OECD) buyers and financing firms increasingly attach fiscal transparency conditions to their dealings with Latin America, China is less insistent so far. 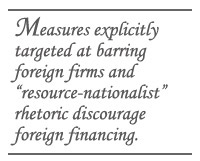 Without progress on transparency measures, Latin America would be exposed to the well-known “resource-curse” problems in which many countries watch their commodity incomes used for unproductive expenditures rather than for poverty reduction and economic development or, in a number of cases, to fuel conflicts. To be effective, effective supervision through private auditors as well as civil-society watchdogs must accompany transparency measures, with resulting government income from commodities then used for sound development policies. Arguably the most famous examples of resource-rich developing countries that have avoided the resource curse by such measures are Chile and Botswana.

Third, the extraction of most commodities carries high social and environmental impacts. After all, almost all oil and gas production as well as exploitation of almost any mining resources implies considerable disturbance to the natural environment and consequently to surrounding communities, which frequently depend on this natural environment for livelihoods. Even commodities such a soy have strong environmental impacts, as Brazil currently experiences in efforts to square massive soy production with preservation of the Amazon rainforest. Thus, establishing effective impact-assessment, monitoring and mitigation systems is vital. As for the case of transparency, such systems have, in most cases, already been set up in dealings with OECD-country commodity buyers.

Such systems must be applied with new buyers like China. This is of importance in many Latin American countries where the combination of some radical political forces, strong natural-resource endowments, and deterioration of the living conditions of poor communities who depend on those resources – the most famous examples arguably being Bolivia and Ecuador – could make for an explosive brew.

Nonetheless, it’s in Latin America’s interest – and indeed a country’s sovereign right – to decide on social- and environmental-impact management systems attached to commodity extraction. Such conditions can act as a deterrent to foreign buyers and investors, and potentially put the region at a disadvantage vis-à-vis other commodity-supplier countries.

Finally, Latin America faces the challenge of using commodity incomes for economic diversification, notably into sectors with greater value addition. This is generally a problem in commodities trade, but particularly so in commodity dealings with China, as Chinese buyers tend to do most commodity processing in China.

Diversification would help Latin America lessen its dependence on international commodity prices, an important issue in many Latin American countries with a high reliance on commodity exports. For example, Venezuela, with its reliance on oil exports, suffered from fluctuating world market oil prices between the 1970s and 1980s.

Diversification to non-resource sectors is, of course, a hard choice to make in times of commodity price booms, when the temptation is to put all available money into exploiting commodity extraction to the maximum, especially in Latin America where inequality remains high and populist leaders rely on commodity-fueled social-spending programs.

Yet, the political courage needed for such a step would likely pay off in the medium term with more diverse – and hence more stable – economies in Latin America, as well as more widely-spread developmental benefits for the region’s citizens.

During the past 10 years Georg Caspary has worked for numerous multilateral organizations and private firms on energy issues in developing countries. In this capacity, he advised the governments of Brazil, Mexico, Colombia, Honduras, Guatemala and Bolivia. This article expresses his personal views and not those of any institution he is or has been associated with in the past.