The recent Chinese acquisition of the IBM PC division does not illustrate China's rise at the expense of the US. Rather, it signals a deeper shift in the information technology (IT) business, which has been changing the global economic landscape. Jean-Pierre Lehmann contends that the shift arises from the emergent IT stars – China, India, and the United States – adapting to the realities of the interconnected global economy. Progressive R&D efforts and aggressive extraction of creative power across borders has afforded these countries a competitive edge. Meanwhile, restrictive immigration policies and lack of corporate creativity are the main impediments to further expansion of the European and Japanese economies; however, all is not lost. "Economics is not a zero-sum game," says Lehmann. In order to remain competitive in the 21st century IT arena, they must open up to foreign talents and be willing to periodically re-invent and renew their corporate strategies and operations. – YaleGlobal

In the global IT revolution, China and India join the US – leaving Europe and Japan behind
Jean-Pierre Lehmann
Friday, April 1, 2005 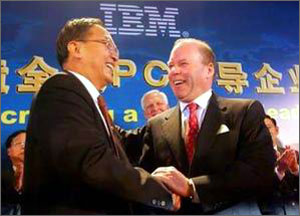 NEW DELHI: The recent acquisition of a part of America's iconic IBM by a Chinese company, Lenovo, has been seen by many as a turning point – a symbol of China's rise and America's decline. The significance of the event, however, lies elsewhere. The Chinese acquisition of IBM's faltering PC division represents a fundamental in shift the global IT industry, a new division of labor in which the successful players – the United States, China, and India – adopt a more complementary than confrontational approach. The rise of Lenovo in the international scene also helps to underline Japan and Europe's diminished role.

From an historical perspective, this shift arose from a second major globalization push that began in the closing decades of last century. The first revolution occurred in the latter part of the 19th and early 20th centuries. Concentrated around transport and its associated technologies and resources (steel, oil, chemicals, ship-building, rolling stock, telegraph, etc), it witnessed the emergence of three new economic powers: the United States, Germany, and Japan. These countries challenged the global economic leadership hitherto dominated by Great Britain.

Of course, the driving technology of the globalization revolution in this century is IT. Most economic forecasts see the world economy in the next quarter-century being dominated by the US, China, and India, while Germany (and other European economies) and Japan decline. Microsoft and Dell of the US, Wipro and Infosys of India, and Lenovo and Huawei of China are the likely 21st century industrial giants comparable to 20th century global companies such as Rockefeller, Benz, and Mitsubishi. There is clearly a correlation between national economic power status and competitiveness at firm level in leading technological sectors.

The United States, home to half the world's R&D in information technology, retains the position of global IT business dynamo. In the knowledge economy, where intellectual power is of crucial importance, the US not only benefits, but indeed also glows, as the magnet of the global brain drain. This distinguishes the United States from Europe, where immigration has been more at the brawn than at the brain level, and especially stands in starkest contrast with Japan, where neither foreign brain nor foreign brawn has been welcome. The US also has the most formidable corporate players across the IT spectrum, including Microsoft, IBM, Dell, Intel, and Motorola. Their American origins notwithstanding, all of these companies are highly globalized and engaged in strategic alliances with Asian partners both in hardware production and software development.

In the global IT business, India definitely supplies the brains (the soft), having eschewed the brawn (the hard). Indian IT companies are investing in China to acquire production capabilities; Chinese companies are investing in India to acquire software. India is improving its hardware production, and China is attracting more investment in research. American companies are outsourcing much of their development work to India, while still focusing on manufacturing in China.

Thus, Lenovo's acquisition of IBM's PC division can be seen in the light of the evolving corporate strategies. As American IT companies focus on systems, the more prosaic production business is being divested. The PC division lacked in profits, luster, and prospects – thus the incentive for IBM to sell. For Lenovo, meanwhile, the deal culminates a 20-year history of honing its manufacturing prowess. With the acquisition of IBM PC, Lenovo aims to establish itself as a global computer company both by learning from IBM and by utilizing (over a fixed time period) its brand name.

As the global IT revolution changes the world's landscape, Europe has virtually withdrawn, albeit with some robust presence still in communications – notably the Finnish firm Nokia in mobile telephony. Japan has also suffered considerable decline, as the apparently dominant players of not that long ago, such as Hitachi, Toshiba, Fujitsu, Mitsubishi Electric, and even Sony, have increasingly appeared as rather hobbled giants. As Europe and Japan sink to the status of "old economic powers" in the 21st century, the US retains its lead among the "new economic powers."

There are two key contrasting features that distinguish the US from Europe and Japan. One is the US adherence to the principles of creative destruction: Companies are constantly in the process of re-inventing themselves and casting off the old to embrace the new, as well as of jettisoning costly operations in order to embark on profitable new opportunities and moving up the technology value-added ladder. Of course there are failures, but the "entrepreneurial" spirit that foreigners so much admire and envy in the US derives not just from the myriad start-ups, but also from the frequent metamorphoses occurring in large American companies that leave their stuffy old German and Japanese counterparts in the dust. Operating in environments of stifling regulations and rigidities, they seem to be gasping for breath.

Secondly, the United States derives tremendous benefits from the constant massive influx of immigrant brawn and immigrant brains. This offers obvious advantages in demographics and creativity: The US, unlike Europe and Japan, is not becoming a geriatric state. The tremendous role of foreigners, especially Asians, in the IT industry in America, in contrast to the much more national make-up of European and Japanese companies, is a great testimony to this fact.

Japan's precipitate decline emerged due to the same two forces that have propelled the United States. The first factor is encapsulated in remarks made by then Prime Minister Yasuhiro Nakasone: When Japan was at the height of economic power and glory, he attributed its success in good part to Japan's racial homogeneity. The second factor is that the Japanese do not embrace the notion of creative destruction. There are virtually no start-ups in Japan, and oftentimes large Japanese companies become immovable bureaucracies. In the days of "hard-power," Japan's racial homogeneity and strict hierarchy were, arguably, advantages. Famed Japanese management techniques such as kanban benefit from strict discipline and from workers' ability to communicate easily. In this globalized, interdependent IT-revolutionary era, however, Japan's racial exclusivity and corporate bureaucratic hierarchic immobility are major obstacles.

There is no God-or-man-written law that says that as new powers emerge, others must eclipse. Economics is not a zero-sum game. The rise of China and India – and other countries – should ideally revivify the older economic powers by providing new horizons, new challenges and new inspirations. Not only opening up to foreign talent, but indeed competing for it, is one prescription that Japan and Europe could fruitfully apply. Understanding the principles and implementing the practices of creative destruction is another constructive prescription.

The recent announcement that Sony, beset by poor results, rigidities, and strategic drift, has turned to its first non-Japanese CEO a Welshman, Sir Howard Stringer, and that he will be running the company from New York, may in time also symbolize a seismic shift in Japan's corporate culture needed to revitalize its economy. With the much heralded Lisbon Strategy – EU reforms created to inject new dynamism and growth into the regional economy – European leaders might reflect on their past: During the age of exploration, success was driven by creativity, an enterprising global outlook, and ambitious leadership in boldly setting out for the unknown.

Jean-Pierre Lehmann, Lehmann@imd.ch, is Professor of International Political Economy at IMD, in Lausanne, Switzerland, and Founding Director of The Evian Group.