Chinese Prime Minister Wen Jiabao's recent diplomatic visit to India resulted in a number of potentially historic agreements. Economist Clyde Prestowitz suggests that collaboration between the two Asian nations may reshape globalization in the 21st century. The European age of exploration set into motion a first wave of globalization – setting the stage for centuries of Western economic, social, and political influence over world affairs. In the second half of the 20th century, Prestowitz writes, a second phase emerged: Post-war politics and the rise of multinational corporations introduced a more US-centric globalization. Today, advances in communications, manufacturing, and delivery systems have broadened the scope, and as he writes, "Globalization is going truly global at the speed of light." Should the concerted efforts of China and India prove effective, the two emerging powers are poised to define globalization's next phase. – YaleGlobal

By shaking off a socialist past and deepening bilateral cooperation, the two giants could push globalization in a new direction
Clyde Prestowitz
Friday, April 15, 2005 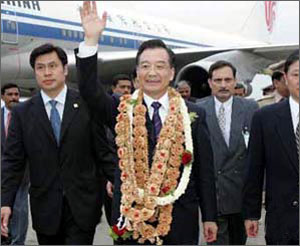 WASHINGTON: Chinese Prime Minister Wen Jiabao has been in India this week talking peace, free trade, and technology cooperation – but the real message was the end of 600 years of Western dominance. "Together," said Indian Prime Minister Manmohan Singh, "India and China could reshape the world order."

How they might do that was spelled out in the agreements they reached. First, they made peace by moving to settle an old border dispute, and China indicated support for India's bid to become a permanent UN Security Council member. Both parties also initiated discussion of a possible bi-lateral free trade agreement. Last, and by far most important, they called for combining Indian software technology with Chinese hardware technology to achieve world leadership in the global information technology industry. Thus, India and China are inventing a new version of globalization, which is already negating Western hegemony by shifting wealth and power to Asia.

What is the history of these developments? Six hundred years ago, China and the area that is now India accounted for about 75 percent of global GDP. Europe was insignificant, and America still lay undiscovered beyond the Atlantic. Then, Portugal's Prince Henry the Navigator led an effort to develop superior ships and nautical technology, enabling his captains to get around Africa and develop sea routes that would evade the Arab/Venetian-controlled overland caravan tracks to the riches of the East.

When Vasco da Gama arrived in Calicut in 1497, the first era of globalization was launched: European countries competed to use their superior technology to create worldwide empires. Earlier in the 15th century, the Chinese had sent great fleets to India, the Persian Gulf, and the South Pacific, but without establishing trade ties or conquering territory. By the time the Portuguese arrived, the Chinese had gone home and forgotten how to build ships. Five hundred years later, at the dawn of the 20th century, Europe and the United States accounted for the vast bulk of world GDP, while Asia had slipped into increasing economic insignificance.

The first era of European-led globalization was shattered by the catastrophes of World War I, the Great Depression, and World War II. With the subsequent Marshall and Dodge Plans, which rebuilt Europe and Japan in the 1950s, and with the creation of the International Monetary Fund, World Bank, and World Trade Organization, the United States inaugurated a second era of globalization. This era was characterized not by empire but by the advent of the multinational, globe-spanning company that saw the world as its market. As technology shrank time and distance, products like Coca Cola, McDonald's hamburgers, and the Sony Walkman became global brands, and trade and international investment flows grew at a geometric pace. Indeed, for nearly 50 years, international trade grew faster than domestic GDPs and became the main driver of global growth.

Yet the growing use of the term "globalization" to describe this phenomenon masked a less grandiose reality: In truth, what was going on was more Americanization than globalization. The dollar was the world's money. Most of the foreign investment was American. Technical standards like the Windows operating system for the personal computer or TCL/IP for the Internet were all set in the United States. Music and pop culture came largely out of America, which was also the major consumer of the exports of other countries. On top of that, the communist and socialist world – including China, India, and the old Soviet Union – wasn't playing. So globalization really only applied to about half the world – the half dominated by the United States.

It was the death of Mao Zedong in 1976 that began to change all that. The new Chinese leader, Deng Xiaoping, quickly ended Mao's Cultural Revolution. He took the truly revolutionary step of setting China's 1.3 billion people on the capitalist road by announcing that "to get rich is glorious." By 1989, China was already showing signs of getting rich, even as the Soviet bloc was wheezing on the brink of economic collapse. The fall of the Berlin Wall in November 1989, brought another 500 million former residents of the Socialist Paradise onto the Capitalist Road.

This, in turn, caused a crisis in socialist India. It had long depended on the Soviets for critical goods and for favored export markets. When that all disappeared, India was thrown into a financial crisis that ended just short of bankruptcy. It also ended Socialism in India: The new government announced that India, too, would be taking the capitalist road, and that the new business of India would be business.

Thus, in the course of the 1990s, three billion newcomers embarked on the capitalist road. These newcomers are mostly poor, and a large number are highly skilled yet willing to work at very low rates of pay. Moreover, they have come into the global economy at just the moment when dramatic technological change has not only negated time and distance, but also upset all the classic assumptions of international economics.

The global deployment of high-speed internet communication renders geography almost irrelevant: anything that can be done digitally can be done equally well from any location on the globe. For example, software development is no longer confined to Seattle or Silicon Valley; it can be produced in Bangalore for customers in Silicon Valley just as easily as it can be produced in the Valley itself. By the same token, express delivery by FedEx or UPS and supply-chain management allow products to be manufactured and delivered to any spot on the planet within 36 hours.

As a result of these developments, China has overwhelmingly become the location of choice for global manufacturing, and India is fast becoming the preferred place for production of software and the handling of outsourced business services. Not only that, but both countries are also racing not to the bottom, but to the top of the value-technology chain. They can do the most sophisticated technology at a fraction of the costs in the West and developed Asia.

This is not the way international economic theory has long held that things should be happening. The classic assumptions hold that technology, capital, and labor are immobile and that low-wage countries focus on labor-intensive production, while developed countries focus on innovation and capital-intensive production. In fact, all these factors are not only mobile, but instantly so. As a result, globalization is no longer a matter of Americanization; globalization is going truly global at the speed of light. India and China have become not only the world's fastest growing economies, but are also destined to become the world's largest – surpassing both Japan and the United States.

If they do manage to work together, they will surely create the new world order of which Prime Minister Singh spoke.

Clyde Prestowitz is author of the forthcoming (in May) book: Three Billion New Capitalists: The Great Shift of Wealth and Power to the East. He is also President of the Economic Strategy Institute in Washington D.C.