China’s fertility rate has barely budged even though the government has loosened its one-child policy for families. Population is linked to economic growth yet uncertainty combined with a rising living standard and cultural acceptance of small families contribute to the trends. China’s fertility rate is 1.8 children per women, below the 2.1 replacement rate. The nation posted 17 million births in 2017, 15 million in 2018 and could be on track for 11 million this year by some reports. In planning schools, housing, transportation and more, governments must consider population trends. “The impact of fertility on economic development lags by about 20 years, roughly the time period needed for people to enter the workforce after birth,” explains James Liang. He argues that a smaller population could contribute to reduced economic growth. Smaller cities will struggle with reduced demand for housing or transportation. He suggests that artificial intelligence could support a larger population and larger populations produce innovations. China’s median age is 37. Urging policies that support larger families, he concludes, “A strong population of young people means a strong China.” With more than 1 billion people, China is the world's most populous nation. – YaleGlobal

James Liang is the chairman and co-founder of online travel giant Ctrip. He is also a professor of economics at Peking University’s Guanghua School of Management. He is the author of Too Many People in China? which analyzes the impact of aging on entrepreneurship and innovation. 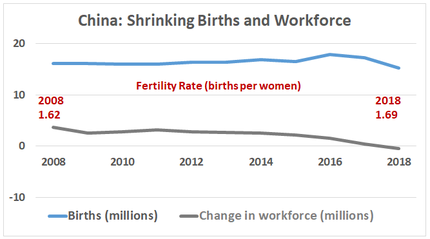 Fewer Chinese Than Expected Apply to Have Second Child