China is leading the world in the highly regulated caviar industry. The term, once applied strictly to the roe from wild-caught sturgeon, is now loosely applied to eggs from multiple species of fish, whether caught in the wild or raised in aquaculture facilities. The delicacy originated in Russia and Turkey before spreading to Europe and the rest of the world, and in overfishing became a threat in the 20th century. Most of the world’s caviar comes from fish farms in China, Italy, the US, Azerbaijan, Bulgaria and France. More than half of the world’s commercial caviar farms are now based in China. The world produces about 200 tons of caviar each year, and China also leads in exports of caviar though some buyers, especially in Europe which is the leading importer, are wary about quality and substitutions. The industry is highly regulated and to ensure sustainable trade, the World Wildlife Federation reports, “since 1998, all species of sturgeon and paddlefish have been listed on Appendix I or II of the Convention on International Trade in Endangered Species of Wild Fauna and Flora (CITES) whereby international commercial trade is prohibited or only authorised with the relevant CITES documents granted by the CITES authorities.” – YaleGlobal

Caviar is a highly regulated industy to protect the sturgeon species, and China is a growing force in both production and consumption
Ephrat Livni
Wednesday, August 7, 2019

Read the article from Quartz about the caviar industry.

Ephrat Livni is a writer and lawyer. She is obsessed with culture, language, literature and law. 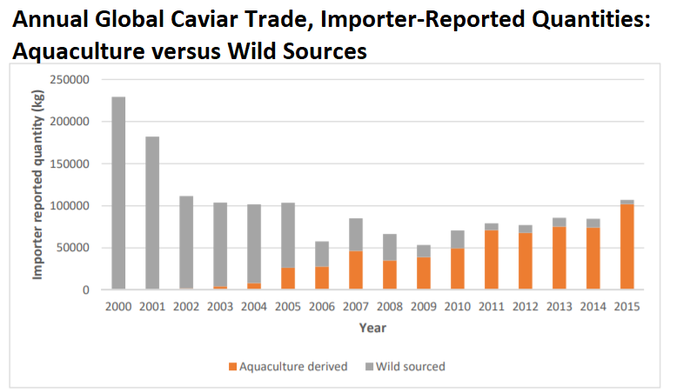 Read “Understanding the Global Caviar Market: Results of a Rapid Assessment on Trade in Sturgeon Caviar” from the World Wildlife Federation.

Caviar Trade Shut Down to Save Sturgeon