China Shows the Way in a Quota-Free Market

The recent end of the textile quota regime introduced freer trade to the global market. Predictably, nations who stood to lose market share - mostly to China - have cried out in anguish. According to Linda Lim, restricting Chinese exports is a short-sighted and ineffective strategy: "One would do better to learn from Chinese example of smart investment and management to thrive in a globalized economy of 'creative destruction.' " While Chinese workers do earn less than comparable laborers in developed nations, the country's true competitive advantage actually stems from its more productive labor, economies of scale, convenient geography, and heavy investment in physical infrastructure. Lim argues that developing nations "can sustain their longer-term competitiveness only by emulating China," while developed nations should redeploy labor and capital into more profitable sectors. As in any market competition, not all producers will survive, but renewed protectionism will only delay necessary economic restructuring, just as the MFA did for three decades. – YaleGlobal.

China Shows the Way in a Quota-Free Market

Instead of curbing Chinese textile exports, one should emulate its smart investment and management strategy
Linda Lim
Monday, February 21, 2005 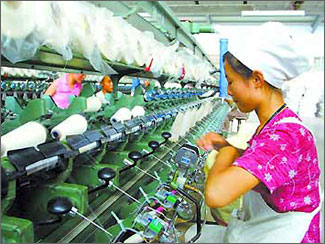 ANN ARBOR, Michigan: The January 2005 termination of the three decades-old textile quotas have been met with anguished cries from affected countries, as well as calls to restrict exporters read: China: poised to dominate the world textile market. This populist call will not only hurt the interest of consumers, who would benefit from the lower cost of an unshackled market, but would also delay industry modernization and reform. Instead of blocking Chinese exports, it would be better to learn from the Chinese example of smart investment and management to thrive in a globalized economy of "creative destruction."

In place since 1974, the Multi-Fiber Agreement (MFA) aimed to protect developed-country textile manufacturers, who had lost comparative advantage in this typically labor-intensive industry to poorer, and thus lower-wage, country competitors. Initially intended as a temporary measure to give the developed country industry time to adjust to the growing competition, the MFA was repeatedly extended until, as part of the 1994 establishment of the WTO, an agreement was reached to disband it within ten years.

The MFA resulted in the proliferation of developing country textile and clothing exporters. As manufacturers reached quota limits in one exporting country, operations moved to countries not yet subject to quotas. This process, known as "quota-hopping," helped many developing countries, such as Bangladesh, Sri Lanka, and Cambodia. Everywhere, the industry employed predominantly young single women, providing their families with higher incomes, and making economic and social independence a reality for many.

At the same time, quota protection predictably discouraged its beneficiaries in both developed and developing countries from improving their competitiveness. The chickens of their inattention have come home to roost, as many now see their market shares being gobbled up: China's share of the US$350 billion global textile market is expected to rise from its current 20 percent to a maximum of 60 percent in the coming years.

Predictably, a protectionist outcry has arisen against the one exporting country that has done everything necessary to be competitive and no longer dependent on low wages or quota protection. Today, China finds itself the target of post-quota protectionist efforts in countries - developing as well as developed - whose governments and industries failed to prepare for post-quota market challenges. Renewed protection will only perpetuate dependence on unsustainable market interventions - at the expense of both consumers (who must pay higher prices) and workers (whose wages and productivity are lower, and jobs fewer).

Underpinning the current controversy is the erroneous belief that China's competitiveness in textiles and garments derives from its inexhaustible supply of readily-exploited unskilled labor. Though China's labor certainly is cheap compared to developed countries', wages have been rising rapidly. Labor shortages have appeared as economic growth spreads prosperity; many workers are returning to their countryside homes as farm incomes rise. Clothing industry wage rates (and overall labor costs) are already significantly higher in China than in Vietnam, Cambodia, Bangladesh, India, Sri Lanka, and Indonesia.

The Chinese textile industry's competitive advantages lie elsewhere. First, Chinese workers are much more productive, probably because they are better-educated, better-motivated, and have better health status, given the legacies of the socialist state. Second, Chinese factories benefit from economies of scale, given the large production base and domestic market afforded by the country's huge population. Third, China's large, diverse, and increasingly integrated industrial base means that many materials required to make clothing are locally available, avoiding the added costs, risks, and longer delivery lead-times that imported imputs impose on other countries. Fourth, China's geographical location, close to Japan, Korea, Taiwan, and Hong Kong, allows it to readily import advanced equipment and high-tech textiles for its finishing industries. Fifth, the predominantly Hong Kong- and Taiwan-based manufacturers in the global industry may have language and cultural advantages managing Chinese workers, and thus may be willing to invest more in China. Sixth, China has also invested heavily in its physical infrastructure, allowing speed of delivery of both imports and exports. (China's currency, pegged to a now-declining US dollar, is not a significant factor in its cost competitiveness; the undervalued yuan raises the cost of imported inputs, on which manufacturers rely heavily.)

How, then, can other countries compete with China in the new quota-free world of textile and clothing trade? Capital-abundant, labor-scarce rich countries like the United States and Western Europe cannot have a comparative advantage in the labor-intensive end of the industry, despite their increasingly heavy reliance on lower-wage immigrant labor (including ethnic Chinese). The obvious solution is to exit the industry, redeploying its capital and labor in higher-wage and more profitable sectors, or to relocate operations to more labor-abundant countries. Firms that wish to remain in the industry and stay at home can do so if they automate their technology and move into higher-value segments of the industry; these include new materials development, creative design and marketing - which already account for a high proportion of the industry value chain - and small-batch, customized, skill-intensive high-fashion wear that is more time- and less price-sensitive.

Developing countries located close to rich final markets (e.g. Central America) can also exploit their geographical proximity with short turnaround times in particular industry segments. Those close to China itself can piggy-back on some of their larger neighbor's locational advantages - namely, favorable positioning in East Asia-wide supply chains. As such, they may act as preferred "second source" or "spillover" locations for manufacturers, including those from China itself.

Some developing countries may also have special advantages that set them apart from the competition. For instance, Cambodia has a reputation for good labor standards resulting from its bilateral textile agreement with the United States. Mexico and several African and Caribbean countries also enjoy special trade benefits in the US market. Despite the expiry of textile quotas, China also remains subject to several safeguard protections, a condition for its entry into the WTO.

But these are mostly short-term advantages for developing countries competing with China in the textile and clothing export industry. These countries can sustain their longer-term competitiveness only by emulating China. That is, they need to invest in infrastructure, particularly transportation and logistics, and in training and management of workers to reduce turnaround time and improve labor productivity. They must also lower their trade barriers to imported components, and reduce corruption and other "hidden costs." Further, improving quality, developing industry expertise and linkages to global buyers, and attracting international investors will broaden their export markets, providing access to scale economies.

These efforts require public (government) as well as private (business) resources and commitment, and in the end - as in any market competition - only some of the current country producers will survive. Without quotas, manufacturers and buyers would do well to to consolidate production and purchasing in fewer locations, even as lower post-quota costs and consumer prices hold out the promise of increased sales. Countries that will not be competitive in the new global market need to redirect their resources into other sectors - a process of necessary economic restructuring which renewed protection will, like the MFA itself, only delay and make more costly.

Linda Lim is Professor of Corporate Strategy and International Business at the University of Michigan Business School.