China Steps Up to a Global Threat

World AIDS Day on December 1 was marked in China by an unprecedented openness on the subject of HIV-AIDS. One of the nation's top leaders, Premier Wen Jiabao, visited patients in AIDS wards and proclaimed a new commitment to providing medical treatment for HIV-infected people and to prevention measures and education about the HIV virus. Veteran China watcher John Gittings writes that Beijing's long-awaited recognition of HIV-AIDS in China comes as part of a general trend towards greater openness on health issues and in a spirit of cooperation with international anti-AIDS organizations. However, with a window of only two or three years before the virus spreads rampantly within the general population, AIDS activists caution that the new openness will be meaningful "only if Premier Wen's willingness to level with the world, and with the Chinese people, is carried out on the ground." - YaleGlobal

China Steps Up to a Global Threat 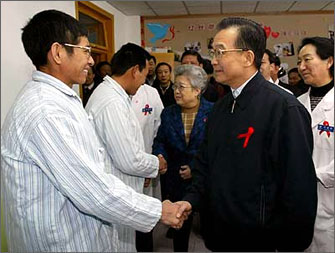 Premier Wen Jiabao met with AIDS patients in Beijing on Dec. 1, but the smiles will only last if kind words and promises are followed by real action.

LONDON: China has finally begun to confront a looming HIV/AIDS crisis which international NGOs say could reach African proportions if not tackled seriously now. On World AIDS Day this week Premier Wen Jiabao visited patients at a Beijing hospital in a symbolic close encounter designed to combat prejudice and neglect. Shaking them by the hand, he promised that they would have "love and care from the entire (Chinese) nation".

Significantly, Premier Wen stressed that China would make "joint efforts with international society to prevent and treat AIDS" in tacit recognition that China can no longer tackle its own problems apart from the global community. This more open attitude - which still upsets older conservative forces in the Communist Party - stems from a more realistic approach by the new ruling group headed by the premier and by the new Party leader Hu Jintao. They have already worked hard to overcome the negative impact of the cover-up of the SARS crisis earlier this year both on domestic and foreign opinion. They know that fears of an uncontrolled HIV/AIDS epidemic would be equally damaging to a China which proclaims the virtues of the global market - and is now actively planning for the 2008 Olympics. Beijing's more open attitude also reflects the more positive role it has begun to play at the UN and the WTO, on issues including nuclear disarmament, the environment and development. 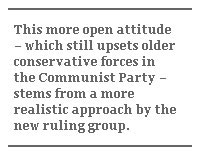 International NGOs who are collaborating with China are encouraged by the new sense of openness and hope the limits will be pushed further back. They say that many Chinese health officials at the national level have fully taken on board warnings from UN AIDS experts that the spread of the virus could become "China's Titanic." The problem lies more with local officials who believe that "social stability" will be undermined if the full extent of the crisis is revealed.

Free treatment is now being promised for sufferers from the virus and the first government-approved condom advertisement has been shown on state television. Domestic Chinese opinion has also welcomed these moves, which some are calling an "ideological breakthrough." 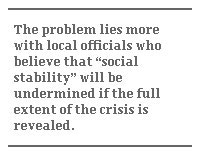 One of the most encouraging developments is the new China Cares program launched by the Chinese Ministry of Health and backed by the international Global Fund to Fight AIDS, TB and Malaria. The Global Fund's contribution to China Cares will total nearly US$ 100 million over five years. This will finally bring HIV treatment and prevention to rural areas devastated by contaminated blood collection in which the virus was spread to peasants selling their blood.

"It is a very positive sign," one experienced worker in the field told an NGO conference in London in his keynote speech last week (though like other participants he still did not want to be named). "The program offers a certain honesty not seen before about the extent of the problem."

Officials in the worst hit province of Henan tried to cover up the blood collection scandal for many years which used unsafe equipment to collect blood plasma for medical products - and recycled infected blood back to the donors. The province grudgingly admitted the problem after reports in the international media and in a few outspoken Chinese newspapers, but police still routinely block access to the victims.

The goal of China Cares (short for China Comprehensive Aids Response) is to mitigate the impact and reduce the spread of HIV/AIDS in and from 56 highly affected poor counties in seven provinces, says the Ministry of Health. In some villages, up to 60 per cent (of the donors) are infected. Many have progressed to AIDS, thousands have died, and there are growing numbers of orphans. 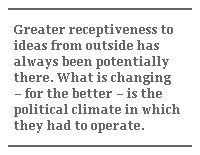 The China Cares project shows that Chinese health officials are more willing to accept constructive advice from international NGOs. Initially, the program stressed drug abuse as a conduit for HIV/AIDS - a less controversial target politically - and focused only on cure. It now fully acknowledges the threat posed by the contaminated blood collection, and places more emphasis on prevention, which NGOs on the ground say is crucial.

This greater receptiveness to ideas from outside has always been potentially there, say foreign advisers who have developed close links over a number of years with their Chinese counterparts. What is changing - for the better - is the political climate in which they had to operate. Senior cadres are less likely now to put a stop on initiatives by more junior officials many of whom have traveled abroad and studied progressive pilot schemes. The advisers also stress that many good ideas are being generated within China and that "foreign experts" should not assume they always know best.

Whatever the source of inspiration, the China Cares project is breaking new ground by tackling prejudice against HIV/AIDS sufferers, and promising to treat all those who need it, including drug users, sex workers and others, without discrimination. If successful, says the Ministry, it could become the model by the end of this decade for the provision of universal HIV/AIDS treatment to all those in China who cannot afford it.

Critics say that this timetable is still too slow. About 70 percent of the country's AIDS patients do not have access to treatment according to the official People's Daily. Beijing says that there are 1-1.5 million people with HIV or AIDS already and that this may rise to 10 million by 2010. NGO workers warn that it "could be Africa all over again."

Offering foreign aid to China can still be a delicate and sometimes touchy affair say those involved in the operation. Provinces in need of help do not want to paint too black a picture of their situation; they want to "look needy but not so hopeless as to deter investment." AIDS is seen by them as "a blot on China's success story."

The constant tension between local bureaucrats seeking to impose secrecy on the AIDS epidemic and the efforts of the (mostly foreign) media to expose it has created a vicious circle which results in more bad news - and further clamp-downs. An expose by Time magazine last year of the spread of HIV/AIDS through drugs and the sex industry in the border province of Yunnan is said to have caused more trouble for NGOs working in the area.

"I personally see this (Mr. Wen's visit to the Beijing hospital) as a key turning point in China's HIV/AIDS prevention and treatment", says Ray Yip, director of the China-US AIDS Prevention and Care Project.

Anti-AIDS campaigners in China have also welcomed the premier's more open approach but say it is only the first step and complain of continued harassment. "He has delivered what we asked for in the past“, says Wan Yanhai, a leading activist who was detained for a month last year after publishing documents about the Henan blood scandal. “Now we should demand more."

Foreign NGO workers agree with Dr. Yip that China has "a window of opportunity for the next two or three years" before the HIV virus spreads from known high risk groups into the general population - but only if Premier Wen's willingness to level with the world, and with the Chinese people, is carried out on the ground.

John Gittings is a research associate at the Centre of Chinese Studies, School of Oriental and African Studies, University of London, and was previously China specialist at The Guardian (UK). Website: www.johngittings.com.