China’s ‘Big Mamas’ in a Quandary

For quite some time now, the Chinese government and its net-surfing citizens have been involved in a series of serious net games. While the government seems bent on restricting the free flow of certain types of information into China that it fears will prove destabilizing – such as Taiwan, the Falun Gong – China's 80 million netizens (net citizens) appear equally determined to keep access to all information portals open. The government's moves, like blocking access to the Google search engine for a week in 2002, have so far met much creative resistance. With the help of “online freedom fighters” and “hactivists” from outside China, software programs that are untraceable by the government have made their way to computers in China. However, as the author notes, recently the government has been actively increasing its capabilities to monitor internet use – in addition to Internet censors called 'Big Mamas' in Chinese which spy on internet users in public places, it has developed sophisticated technology to control internet content. However, in the end, the Internet could prove just too big too control. – YaleGlobal

China's ‘Big Mamas' in a Quandary

Caught between the urge to repress and to make use of the Internet, Beijing sees its power eroded
Paul Mooney
Monday, April 12, 2004 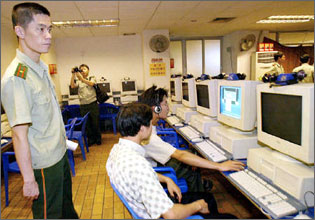 BEIJING: Over the past 18 months, Beijing-using state-of-the-art technology-has significantly stepped up its efforts to control the country's cyberspace, delaying dreams that the Internet would channel new ideas and freedom of expression in China. Some even wonder if the government hasn't already turned the technology to its own advantage as a tool of repression. But those may be fleeting victories as the growing strength of China's netizens begin to overwhelm Chinese censors - known as the Big Mamas.

No one knows exactly how big China's Internet police force is these days, although estimates run as high as 40,000. But whatever its size, its sophistication is greater than ever. The government's new capabilities were revealed in September 2002, when it blocked access to the Google search engine for a week. More ominous, the government also has the ability to search for keywords, and to block “sensitive” e-mails. Several hundreds of thousands of Web pages, like those devoted to Taiwan, the Falun Gong or foreign news coverage, are blocked by the government. The software, says one expert, “is a great technological leap forward.” Chinese censors also employ filtering technology to block and intercept e-mails to and from the country's close to 80 million Netizens.

Beijing has become quite skilled at hunting down proxy servers that allow users to maneuver around firewalls. The average cyber life of a new proxy server is now about 30 minutes. Nor are Internet cafes havens any longer for exploring the Net. Cafes in some provinces are experimenting with swipe cards linked to customers' national ID cards. Some Beijing Internet cafes have installed surveillance cameras overlooking computer screens. One cafe manager showed me a back room, where a police-linked computer, connected to four spy cameras, monitored users.

With the help of overseas “hactivists,” however, Chinese are finding ways around China's Great Fire Wall. New software, such as “Roaming without Borders,” can be easily downloaded in China, and allows users to surf freely. “Everyone is using it,” says a writer, who says Chinese are openly passing the program around. “And the government can't trace the IP address.” She says the software has been in existence for about two years and that it's continuously getting better. “I can get any information I want,” a well-known political dissident told me recently, smiling broadly. A few months ago he was says he was unable to access sensitive sites, reliant on foreign friends to give him news about China.

Making matters worse for a regime not used to considering public opinion, the Internet is emerging as a new and powerful force in Chinese politics and policy-making. “Policymakers can't make decisions based on public opinion, but they can't ignore it either,” Li Minggang, who runs the Ministry of Foreign Affairs Web site, told the Asian Wall Street Journal in a recent interview.

According to a survey by the Chinese Academy of Social Sciences, some 71 percent of netizens say they have more opportunities to voice their opinions online. It's no wonder state-run Xinhua reports that members of the National People's Congress routinely use the Internet to gauge public opinion and to look for new ideas.

While a decade ago government media outlets were the only source of news, market-oriented Internet portals are now challenging the state media. When the Internet picks up a sensitive story, it's not long before the increasingly earnings-driven mainstream print media feels forced to jump into the fray.

It is believed that a clampdown on the Internet in February and March was due to what is now popularly known as the BMW affair, which fueled anger over inequality between rich and poor and city and country. In this incident, Su Xiuwen, allegedly the relative of a local official, became enraged on October 12, 2003 when a farm vehicle scratched the side mirror of her BMW. Su slapped the farmer and then jumped back into her car. She then drove her BMW into 13 farmers, killing the one who scratched her car.

Su was handed a suspended sentence after paying compensation to the victims-reportedly due to political intervention--but the story did not end there. A small newspaper in Liaoning province reported the case and court decision on January 3. After seeing the story on Sina.com, newspapers around the country ran with the news. Resulting chat room traffic and postings complaining about the light sentence and judicial corruption were soon exceeding 180,00 a day on some Web sites. Web monitors responsible for censoring, called "Big Mamas" in Chinese, were unable to keep up with the flood.

The nationwide outcry led to a reopening of the case, which ended with the same result as the first one. And although the government declared the court decision off-limits by the media and the Internet, a glance at popular chat rooms this week found continued angry discussion about the case.

The story of Sun Zhigang had even more far-reaching implications. Sun, a graphic designer from Wuhan, was detained by Guangzhou police last spring for not carrying proper identification. After he was beaten to death by fellow prisoners in a detention center, his death was reported by a local newspaper, and then spread around China via the Internet. The case, which later became known as the Sun Zhigang Incident, led to a huge public outcry, and, shortly after, to the scrapping of the two-decade-old Measures for the Internment of and Deportation of Urban Vagrants and Beggars. As a result, police can no longer arbitrarily detain vagrants and beggars, a move Xinhua called "a pivotal reform of China's social welfare system."

The Internet is even influencing China's foreign policy, where China's leaders have frequently been slapped for being "weak-kneed." Experts say that growing anti-Japanese sentiment on the country's fiercely nationalist Web sites led Beijing to take a tough stance on Japan's recent arrest of seven Chinese activists who illegally sailed to one of the contested Senakaku Islands last month. When the arrests were announced, the Internet was flooded with angry postings calling for a hard-line approach against 'small Japan', a derogatory term used by some Chinese. The government had hoped that the case would fade quickly, and not upset stable bilateral relations between the two countries, but it allowed protesters to demonstrate in front of the Japanese consulate for several days.

The Chinese government is in a dilemma. On the one hand, it recognizes the need for citizens to access the Internet. On the other hand, it fears an uncontrolled Internet could pose a threat to the Party's survival. Up until now, it has always stopped short of adopting drastic measures to control the Internet.

Despite being armed with huge capital and technology, China's Internet police may have their work cut out for them. Online freedom fighters-loose collections of Chinese dissidents and hacktivists outside China-will continue to test the ingenuity of Chinese censors, while at home Chinese netizens will continue to push the line. In the end, the Internet could prove just too big too control.

Paul Mooney, a freelance writer, has been based in Beijing since 1994