Six centuries ago, Chinese Admiral Zheng He embarked on the first voyage of a career that encompassed destinations as far as India, Persia, Arabia, and Africa. Though his achievements were forgotten for centuries, a re-emergence of interest in his story coincides with China's dramatic rise. As historian Wang Gungwu notes, it also coincides with the publication of a controversial theory: Scholar Gavin Menzies has claimed that Zheng He reached North America and the Atlantic a century before Columbus sailed. While nationalistic Chinese citizens are celebrating the naval expeditions and embracing Menzies' theory, the response of the Chinese government has been more muted. Beijing is cautiously joining in the anniversary celebrations, but emphasizes the peaceful nature of his journeys. China's neighbors and other major world powers, who have not forgotten her imperial years, are watching closely. – YaleGlobal 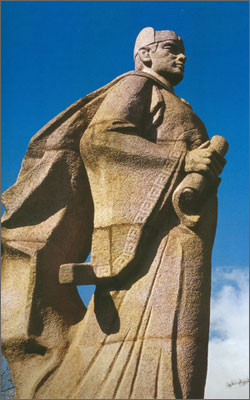 A Dubious Legacy: Was Admiral Zheng He the first to discover America?

SINGAPORE: Six hundred years ago this autumn, a large Chinese fleet led by a famous Chinese admiral sailed from Nanjing on an unprecedented voyage. Falling in a year when the air is heavy with talk of the rise of China, the anniversary of Zheng He's voyage offers a window into the tension between the cautious pride of a government and the exuberance and rising nationalism of many of its citizens.

The Chinese have not been famous for their maritime endeavors. For at least 500 years, most people would have laughed at the idea of a powerful Chinese navy. This is beginning to change, especially in China itself. How Beijing handles the change is being watched carefully, not only by the military strategists of major countries but also by ordinary Chinese both inside and outside China. 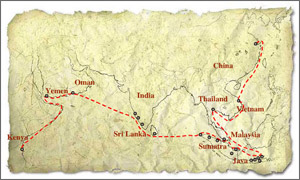 One of the reasons for this change may be a new readiness to re-discover Admiral Zheng He and the seven expeditions he led between 1405 and 1433. His ships sailed well beyond Southeast Asia and visited all the major ports around the rim of the Indian Ocean, reaching the coast of East Africa and the Red Sea. After the seventh voyage, the fleets were destroyed by order of the court and coastal Chinese were enjoined not to trade privately with foreign merchants.

In addition, the Mandarin literati of the landward-oriented regimes of the Ming and Qing dynasties decided to minimize, if not totally forget, Zheng He's achievements. Thereafter, his story survived in a novel and a few little-known books about foreign lands. It was not until the beginning of the 20th century that his name re-surfaced in Chinese writings, around the time that the Japanese destroyed the whole Chinese navy.

Still, little attention was paid to him and his voyages. To many Chinese, Zheng He was a eunuch and a member of the Muslim minority. The expeditions did not seem to have resulted in glory or profit to China. The Zheng clan from his home in Yunnan, however, kept his name alive. Western scholars since the late 19th century were intrigued to pursue neglected Chinese sources and confirm the Chinese achievement of a great naval feat a century before the age of Columbus and Vasco da Gama.

For at least a decade, many groups in China and Southeast Asia have felt that the 600th anniversary of the first of Zheng He's expeditions in 2005 should be celebrated. In China, the various Zheng He associations (the most notable being in Nanjing and Kunming) have vied with one another to host the most memorable ceremony.

The Chinese authorities, however, showed muted response and little official enthusiasm for Zheng He, except to emphasize that the expeditions were sent with peaceful objectives. But with rising awareness of China's need to build up its naval power, there was no avoiding the celebration of Zheng He's achievements, especially due to Western recognition that they were remarkable for the 15th century and to the popularity of books like Louise Levathes' "When China Ruled the Seas".

In the midst of planning for the anniversary celebrations came British writer Gavin Menzies' claim, in his book "1421: The Year the Chinese Discovered America," that Zheng He's ships had sailed into the Atlantic and reached North America. Chinese people everywhere were fascinated. Whether true or not, many were delighted that a Western scholar had acknowledged a Chinese achievement.

Chinese experts on that period of history have not been persuaded by his evidence and the Chinese government has been silent on these claims. The celebrations that have proceeded in Nanjing and Kunming since 2004 have stressed the known routes of Zheng He's fleet and have made only passing reference to the Menzies' publishing phenomenon.

In China, there have also been many comments on the country's failure as a naval power and some incomprehension as to why the authorities seem so timid about proclaiming and broadcasting Chinese maritime achievements. Indeed, Beijing has been careful not to trumpet Zheng He's exploits and draw unwelcome attention to a past in which its neighbours considered China an imperial power.

It is, therefore, significant that all official publications at the celebrations have described only Zheng He's known destinations and not unproven claims, however popular and attractive they may be to patriotic Chinese.

One example that hints at the tensions on this subject in China is a book produced in Yunnan, Zheng He's home province, "The Zheng He Epic." The book shines with pride about Yunnan's local hero. It is a large and expensively produced volume of 384 pages. Throughout, the account is restricted to known facts about Zheng He and his voyages. Only on pages 375-377 is Western speculation mentioned, under the heading: "Views being explored."

The first comes from an article by a Chinese general who introduced a book little-known in China on "The Age of Discovery, 1400-1600" (2002), in which the English author was praised for acknowledging the reliance of Western discoveries on Arab and Chinese navigational innovations. It then criticizes traditional Confucian Chinese officials for neglecting Chinese maritime achievements.

The second passage consists of six quotes by Gavin Menzies. It is interesting that the few quotes do not come from his book, but from a lecture he gave in Kunming and a magazine article entitled "Research on the Muslim Peoples" (2003). The passage also includes photographs of Menzies' book cover, his lecture in Kunming, and two maps that he used to argue that Zheng He arrived at the Atlantic Ocean. These quotes remind us of the absence of a Chinese translation of Menzies' book in mainland China.

This minor inclusion reflects the official position and the stand of Chinese scholars. It puzzles many Chinese, who openly criticize the official neglect of Zheng He through the ages. They are delighted that Menzies has given Zheng He credit for discovering the Americas. They find his interpretations dramatic and refreshing, and they believe that official stupidity caused China to be backward and ignorant. This last point is sensitive and may be one of the reasons why no authority has been prepared to give any translation of Menzies' book an official "imprimatur." What is clear is that while the Chinese government may promote Zheng He, it definitely does not promote the Menzies thesis.

Examples of how the Chinese government is promoting Zheng He include two TV series that will be widely broadcast. The programs show that Beijing is willing to support other claims about the voyages, if they suit China's immediate interests and do not have military echoes. For example, they have chosen to confirm that the former Indonesian President, Abdurrahman Wahid, "is an offspring of a shipman that worked for Zheng He." Recently, another supposed offspring of Chinese sailors who had remained on an island off the coast of East Africa has been welcomed to study in China. The programs even mention the discovery of a connection between red wooden ship debris found in Australia and Zheng He's trips.

But the official position is firm. It stresses that Zheng He's display of naval power was for neither conquest nor invasion but was essentially peaceful. Between 1405 and 1433, his expeditions visited various countries, first in Southeast Asia and then in India, Persia, Arabia, and Africa. Speculative hypotheses about exceeding those proven destinations have no place in China's anniversary celebrations.