Restricting trade is often a tool for governments that want to show their commitment to human rights. But Europe is divided over the relative importance of human rights versus economic growth or the value of trade in promoting those rights. On one hand, trade with China helps to lift millions out of poverty and benefits European consumers. However, China’s suppression of human rights, as dramatically shown in recent events in Tibetan-inhabited parts of China, is hard to swallow. China’s record on human rights is also deeply unpopular with European citizens. “As a result, the EU message on China – and to China – is often confused,” explains journalist Shada Islam. Mixed signals can be dangerous, inspiring protesters to risk their lives while convincing China that the EU is not serious on human rights. Moreover, European governments' inability to speak with one voice on China, Islam points out, will diminish the EU clout. – YaleGlobal 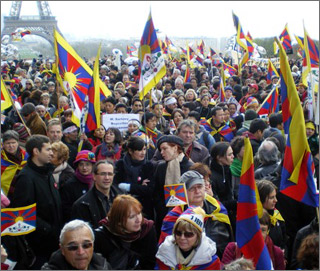 Hornet's nest: Tibet demonstrations like this in Paris, in the year of the Chinese Olympics

BRUSSELS: European Commission President Jose Manuel Barroso's three-day visit to Beijing, starting April 24, was planned months ago to spotlight European Union hopes of upgrading political and business ties with China. However, the talks will now be dominated by EU concern over Beijing's crackdown in Tibet and Chinese anger at the bloc's plans to invite the Dalai Lama to a European Parliament session.

Barroso, accompanied by seven top aides including EU trade chief Peter Mandelson and monetary affairs Commissioner Joaquin Almunia, must tread carefully. The EU may be united in urging Beijing to respect Tibetans' human rights and hold "constructive" discussions with the Dalai Lama, but the 27-nation bloc is deeply divided on overall policy towards China, including demands that government leaders boycott the Olympics opening ceremony in August. 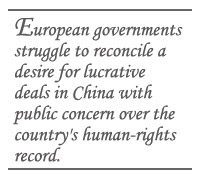 The EU's inability to forge a united stance on dealing with Asia's most powerful economy is undermining its reputation elsewhere in the region. Coming close on the heels of an EU-wide rift on Kosovo, where Europe is split on recognizing the independence of the former Serb territory, and differences on deploying troops in the volatile southern regions of Afghanistan, disarray over China dents the bloc's hopes of becoming a more powerful – and credible – global actor.

EU divisions over China are not new. Unlike the US which has traditionally viewed China as a competitor, EU governments have never quite made up their minds over whether China is a rival or partner. EU officials insist that the bloc's "fundamental approach to China must remain one of engagement and partnership" but European governments have long struggled to reconcile their desire for lucrative business deals in China with ongoing public concern over the country's human-rights record.

As a result, the EU message on China – and to China – is often confused. Officials in Brussels, for instance, have a longstanding human-rights dialogue with Beijing and while they also criticize China on the issue, French, German and British leaders sweep these concerns aside to clinch multibillion euro contracts in China. Routine resolutions by the European Parliament condemning Chinese policies in Tibet, Burma and Darfur go hand in hand with expanding EU-China trade relations and European Commission assertions that China is a "responsible" international actor.

EU trade chief Mandelson in recent months has both berated Beijing as an “out of control juggernaut” on trade and recognized that cheap imports from China have helped keep inflation at bay while China's integration in the European production chain has boosted EU competitiveness. 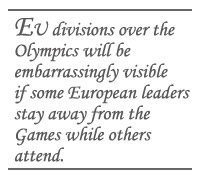 Recent events in Tibet risk making the already-difficult EU balancing act even trickier. For one, EU divisions over the Olympics will be embarrassingly visible if some European leaders stay away from the Games while others attend. Second, the EU mood on China is souring overall, with many Europeans frustrated at Beijing's focus on opening of high-level strategic economic dialogue with the US and, in contrast, its failure to respond to EU calls for more trade restraint and changes in monetary policy.

The European Parliament has called on EU leaders to boycott the inaugural ceremonies. Former student revolutionary Daniel Cohn-Bendit, leader of the parliament's Green group, compared the Beijing Games with those hosted by Nazi Germany in 1936.

In addition, European Parliament President Hans-Gert Poettering, a close ally of German Chancellor Angela Merkel, has invited the Dalai Lama to address the assembly while French Foreign Minister Bernard Kouchner has suggested the Tibetan spiritual leader should attend a meeting of EU foreign ministers. No dates have been set for either of these encounters, but China has reacted angrily, accusing the EU of meddling in its internal affairs. 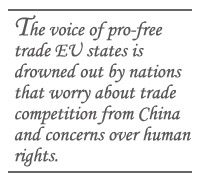 Several European politicians plan not to attend the Olympics opening ceremony. Leaders from former communist Eastern Europe, who generally take a tough line on China – and Russia – are spearheading the drive to avoid the August 8 festivities. Polish Prime Minister Donald Tusk and Czech President Vaclav Klaus have said they will not attend the Olympics.

Significantly, Germany's Merkel and Foreign Minister Frank-Walter Steinmeier have declined to take part in the opening ceremonies while French President Nicolas Sarkozy has not made up his mind yet. Britain's Gordon Brown will only attend the closing ceremonies and fulfill ceremonial duties, given that London will host the 2012 Summer Olympics.

Germany's stance on China is especially confused. The EU's largest economy relies heavily on exports to China – worth 27.5 billion euros last year – but members of the ruling grand coalition of Social Democrats and Christian Democrats are at odds over how to deal with Beijing. Merkel has taken a tougher line on Beijing than her social democratic predecessor Gerhard Schroeder. Her decision to meet the Dalai Lama in her office last September cast a chill in German-China relations. Aides say the chancellor has not spoken with Prime Minister Wen Jiabao in several months.

Germany's social democrat Foreign Minister Frank-Walter Steinmeier, however, is trying hard to mend fences with Bejing and has held two meetings with Chinese counterpart Yang Jiechi, making it clear he opposes a boycott of the Games. German business leaders press for a thaw in Berlin-Beijing ties, but Berlin also recently suspended talks with China on climate change and renewable energy because of events in Tibet. As such, rebuilding trust between the two countries will not be easy.

While Germany blows hot and cold on China, the voice of pro–free trade EU states like Britain and the Netherlands is drowned out by southern European nations, including Italy, which worry about rising trade competition from China, and eastern EU newcomers, which add their weight to Nordic concerns over human rights.

EU officials complain that China’s lukewarm response so far to key EU demands, including Mandelson's repeated warnings that the rapid rise in China's trade surplus with the EU – which grew by 21 percent last year to reach a record 159.2 billion euros, or US$251 billion – is not making their task of fighting protectionism any easier.

China must provide the EU with “a good news story” on trade and human rights, they say, to prove that engagement and constructive dialogue are worth the effort. As such, Brussels is hoping to launch a so-called "high-level mechanism" on trade at the meeting in Beijing to discuss issues like improved protection of intellectual property rights and product safety standards.

EU Monetary Affairs Commissioner Almunia, meanwhile, wants Beijing to stop focusing on the yuan’s exchange rate with the dollar and also allow its currency to appreciate faster against an ever-stronger euro. In addition, the EU has complained about China's neglect of governance standards in pursuit of energy resources in Africa while several EU governments, heeding US warnings about the rise in China's military budget, have indefinitely shelved plans to lift an EU arms embargo against Beijing.

European governments' inability to speak with one voice on China diminishes the EU's clout. The EU says it demands that Beijing talk to the Dalai Lama are prompted by real concern that discontent in Tibet could spread to other provinces and a longstanding European belief that a more open society, with better protection of human rights and the rights of minorities, is in China's interest. But China is unlikely to pay heed to advice, however wise and well-intentioned, delivered by a divided and weak Europe.