The internet has played a key role in China's opening up to the world. But, as Rebecca MacKinnon writes, the Chinese government has cracked down on online freedom of expression. Thanks to deals with multinational corporations, US technology has facilitated Beijing's campaign to restrict internet discussions on troublesome issues like democracy, human rights, and Taiwanese independence. "Granular" technologies developed by US information technology giants enable installation of a powerful mesh of filters to control information flow: State-of-the art routers automatically track individual internet users and even filter out sub-pages from larger sites. As a result, says MacKinnon, "the picture of the world as seen by most Chinese internet users is heavily skewed in the regime's favor." Western companies have felt increasing public pressure to take more responsibility for China's uses of their products, even spurring US legislation to support freedom on the internet. Despite the multinationals' claims of innocence – and ignorance – more and more critics, like MacKinnon, are calling for "consequences for companies found to be deliberately aiding censorship and political repression." – YaleGlobal 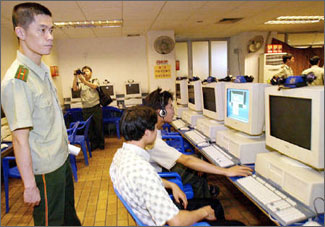 CAMBRIDGE, Massachusetts: In early June, Chinese trying to create blogs on a Microsoft-hosted service using words like "democracy", "freedom," or "human rights" in the title received a rude reminder: "The title must not contain prohibited language, such as profanity. Please type a different title," said a message. This warning equating democracy and freedom to profanity marks a new milestone in the continuing battle for free expression in China, with a Western software behemoth openly throwing its weight behind government censors. And this is only the tip of the iceberg.

More insidious than the open restriction on the blogging site is the invisible but fine mesh of censorship that China has installed, thanks to the assistance from leading Western firms. China is now engaged in an even larger investment in technology that would help control what its citizens can read on the web and what they can express. This system of censorship has undermined earlier optimism about the internet ushering an era of free expression in China.

How effective is this system? Not 100 percent, by any means, because tech-savvy users can always find ways around internet blocks. But experts who have studied China's system conclude that, as far as the Chinese Communist Party is concerned, it is effective enough to be worth the money and effort. A recent study by the Open Net Initiative (ONI), in conjunction with Harvard's Berkman Center for Internet and Society, reveals an increasingly sophisticated set of mechanisms through which Chinese internet users are prevented from accessing material deemed off-limits by the Chinese government. See: http://www.opennetinitiative.net/studies/china.

Though government statements emphasize anti-pornography crackdowns, ONI found the primary focus of China's filtering system to be on political content. Public security organs and internet service providers employ thousands of people – nationwide, at multiple levels – as monitors and censors. Their job is to monitor everything posted online by ordinary Chinese people and to delete objectionable content.

The key to the filtering system, however, is automated technology – equipment and software courtesy of US companies – enabling China's service providers to enter hundreds of thousands of banned keywords and web addresses for automatic blocking.

And this automation is where the true power lies. The Cisco routers sold to China have the ability to block not only the main addresses for websites, but also specific sub-pages while leaving the rest of the site accessible. So, for instance, Chinese censors can allow access to most areas of Stanford University's website, http://www.stanford.edu, while blocking a sub-section within that domain, http://www.stanford.edu/group/falun/, a page for Stanford's followers of Falun Gong, a religious group banned in China. The same capability allows access to Google's main search page, while blocking specific search results based on banned keywords or web addresses.

Promotional material for the routers – which can deploy up to 750,000 filters – emphasizes the "granularity" of Cisco's filtering capabilities. This granularity of censorship enables China – to a larger degree than previously thought possible – to have its cake and eat it too. China has plugged its citizens into the internet connectivity they need to trade and communicate with the world. But at the same time, the picture of the world as seen by most Chinese internet users is heavily skewed in the regime's favor. Information showing the Chinese government in a positive light, or at least being responsive to admitted problems, is easily accessed. Critical information exists online, but it is kept at the level of specific complaints and relatively tame localized gripes. Only the most determined and tech-savvy internet users will succeed in accessing web pages about Chinese authorities' human rights abuses, or information relating to the Taiwan secession movement. On the other hand, information about Japanese atrocities, US abuses at Abu Ghraib, and belligerent vitriol supporting attacks on Taiwan if it declares independence are easily found in Chinese cyberspace. Thanks in part to this filtered view of the world, nationalism and xenophobia have found fertile breeding ground in Chinese cyberspace, while the pro-democracy movement has not.

China is clearly not sitting on its current success. It has undertaken a massive internet infrastructure upgrade with a US$100 million project called ChinaNet Next Carrying Network, or CN2. The project is big business for the companies awarded CN2 contracts: Cisco Systems and Juniper Networks, France's Alcatel, and China's only major player in the internet router market, Huawei Technologies. Over the next 12 months, new routers will be installed in 200 cities throughout China. The more state-of-the art the router, the more "granular" its filtering mechanisms become. Thus, experts predict the new network will enable the Chinese government to control and monitor online speech even more tightly.

Are US companies responsible when the Chinese government deploys their technology to stifle free speech on the internet? If the internet is going to change China in the long run anyway, how much does their complicity really matter?

A heated debate continues in the media and in cyberspace: Robert Scoble, a Microsoft employee who maintains a popular technology weblog, rose to his company's defense against a storm of criticism. "We must comply with the local laws if we want to do business there," he wrote, claiming to have encountered an "anti-free-speech" stance from students, professors, and officials in China.

Outraged Chinese bloggers called for a boycott of MSN Spaces. One of China's most famous bloggers called Microsoft "evil." A few days later Scoble backed down, admitting that he was wrong. Microsoft as a company, however, has stuck to the following statement: "MSN abides by the laws and regulations of each country in which it operates."

Human rights groups want to hold such companies responsible for facilitating restrictive government policies. Others point out that by hooking China up to the World Wide Web, Cisco has ultimately done much more to expand freedoms in China than to stifle them. Cisco spokespeople say they are merely selling technology to China and cannot control how it gets used. But the ONI's authors point out, "It is unlikely that Cisco would choose not to provide customer support or training for specific functionality of their products."

This spring, US Congressman Christopher Cox re-introduced the Global Internet Freedom Act, legislation that would support the development of technologies to foil attempts by non-democratic governments to "jam" or filter the internet. The proposed text declares, "The success of United States policy in support of freedom of speech, press, and association requires new initiatives to defeat totalitarian and authoritarian controls on news and information over the internet."

The Act says nothing, however, about the role played by American technology companies in the creation of these controls – passively or actively. According to ONI, it is difficult to believe that Cisco, Nortel Networks, Sun Microsystems, Juniper, and 3COM do not know how their products will be used by certain customers. There needs to be greater public examination of exactly how US technology companies are conducting their business. What do they know, and when do they know it? There should be consequences for companies found to be deliberately aiding censorship and political repression.

Rebecca MacKinnon is a Research Fellow at Harvard Law School’s Berkman Center for internet and Society and is co-founder of Global Voices Online (GlobalVoicesOnline.org), a global citizens’ media project. From 1998-2001 she was CNN’s Beijing Bureau Chief and Correspondent and spent a total of 10 years working as a journalist in China and Taiwan. Her weblog is at RConversation.com.