Despite a turbulent history, China has enjoyed two decades of growth and self-confidence, boosted by diplomatic and business engagement with the rest of the globe. But China has only entered “the first generation of China's globalization,” described by Jonathan Fenby in this second article of a two-part series. Now entering its “second generation of globalization,” the world’s most populous nation must handle challenges that range from environmental deterioration to growing global competition for resources such as oil, metals or water. Fenby urges ongoing engagement and open trade, noting that Chinese leaders must balance domestic growth and stability while resisting any temptations to withdraw from the demands of globalization. Fenby concludes that China depends on the world to purchase its goods, but must also keep its citizens content: “Hu and Wen have an extraordinarily complex balancing act to perform, perhaps the most challenging management task on earth.” The stakes are immense for both China and the world. – YaleGlobal

The nation cannot build a wall against the challenges facing the rest of the globe
Jonathan Fenby
Thursday, July 24, 2008 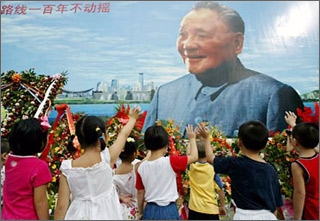 LONDON: In the 30 years since Deng Xiaoping launched China on the path to the market, no country has benefited more from globalization. While the United States and the European Union have profited from the breaking down of trade barriers and the spread of investment, people and knowledge, it’s been the People’s Republic that has made the greatest strides. Now, as their country enters the second generation of economic reform, Deng’s heirs face the challenges that come with globalization. How the Chinese handle the challenges will be crucial not only for China but, given its role in the global economy, for the rest of the world.

China’s growth has been so spectacular, its self-confidence so great, that it’s easy to forget just how enormous a change the last 30 years represent. For much of the 25 years before Deng changed course in 1978, the country’s history had been one of mounting political and economic weakness accompanied by social fragmentation. The fall of the Qing Empire in 1912 was followed by warlordism on a massive scale and then the weak Nationalist government in Nanjing. Japanese intrusion stretched from the takeover of Manchuria in 1931 through full-scale warfare from 1937 to 1945, and then the often brutal and increasingly erratic rule of Mao Zedong, ending with the 10 years of the Cultural Revolution.

Against that background, the process launched by Deng after he won the power struggle that followed Mao’s 1976 death could only be welcome change for hundreds of millions of Chinese. Economic progress has not, of course, been accompanied by political liberalization. Nor does China enjoy the rule of law or effective accountability – both of which would require the Communist Party to be subject to external review.

The party talks of encouraging internal democracy, and Prime Minister Wen Jiabao busily displayed the regime’s human face when visiting the scene of the earthquake in Sichuan, and Hu Jintao unbent last week to the extent of answering a couple of chat-room questions during a visit to a newspaper website. Think tanks debate between “new left” and “new right” prescriptions for the country, spinning theories that seek to reconcile greater democracy with continuing Communist rule.

For the reality is that no questioning of the fundamentals of the party’s continuing control is permitted. Internal democracy is designed to strengthen the party, not to bring its monopoly into question. The strange combination of Marxism, Leninism, Mao and Deng thought, capitalism within a state framework, has assumed the status of the imperial Mandate of Heaven. Dissidence is taken to equate with subversion. The common western assumption of the 1990s that economic progress would usher in democracy – one of the underlying political arguments employed by proponents of globalization – has been resoundingly disproved in the world’s most heavily populated nation. The clampdown in advance of the Olympics, ranging from the arrest of human-rights activists and eviction from the city of ethnic minority workers to a curfew on bars and closure of music venues, bears further evidence of the micro-managing control the regime seeks to achieve.

That has been no obstacle to trade and foreign economic involvement in the People’s Republic; indeed, it’s none too difficult to draw a graph which shows that, with some lags, foreign investment in the mainland rose after each act of political repression following the 1989 Beijing massacre. Under the post-Tiananmen Square party chief, Jiang Zemin, the equation worked robustly, particularly once inflation had been dampened in the mid-1990s. Hu took over in 2002, intent on continuing growth but also including pursuit of a “harmonious society” to lessen disparities spawned by headlong expansion which threatens social stability.

Though Hu was duly confirmed for a second term last October, he faces a wider and deep array of challenges than his predecessor had known. The stakes are heightened by the globalization process behind China’s emergence, which, at the same time, makes the evolution of the mainland of central and direct concern to the world.

China’s ecological disaster threatens neighbors. The Netherlands Environmental Assessment Agency, which reported last year that the People’s Republic had become the biggest source of carbon-dioxide emissions, now says the nation accounts for a quarter of the global total and two-thirds of the 3 percent international increase in 2007.

China’s changing labor and social patterns are linked to developments stemming from its global entanglement. The era of China as the overwhelming source of cheap products may ebb as workers’ expectations and demand for skills push up wages. Shoemakers in the original manufacturing base of Guangdong in southern China are loud in their complaints about the threat from Vietnam and South Asia.

A middle class that may number 80 million is boosting demand for everything from milk and meat to cars and furniture made of fine imported timber. Input costs in industry soar as China must compete on world markets for oil, iron ore and metals. Inflation has more than doubled in a year, and there are signs that productivity no longer fully absorbs costs – Chinese exports to the US moved from being deflationary to inflationary last summer.

Though inflation means that real interest rates are negative, they are still higher than those now practiced by the US Federal Reserve. Combined with expectations of a continued rise in the yuan, that has attracted a flood of hot money which creates a lake of liquidity that adds to monetary instability. Committed to ensuring continuing growth and creating 10 million jobs a year but also wanting to establish control and let air out of the bubble, the authorities dither over policies. Progress towards the “harmonious society” appears halting and tens of thousands of protests break out each year over causes ranging from land seized by officials to pollution and corruption.

In all this, China’s globalized role and the path charted since 1978 mean that the mainland cannot retreat behind the walls of a command economy. The balance of exports is shifting, with the EU replacing the US as the main destination and sales to other emerging economies growing. That could shelter the mainland somewhat against a global slowdown. But, until the day when domestic demand is strong enough to soak up production from an economy still forecast to grow at 9 to 10 percent this year, exports – and thus, the world – will stay at the heart of the expansion the leadership needs to retain support and keep the country on its dictated path.

As a result, China needs a peaceful world with open trading channels. Protectionist noises from the US campaign trail or from European politicians evoke scornful remarks from Chinese officials about the West not embracing the globalization it launched. But the political threat is not one Beijing can ignore; a trade war would be a disaster, one that the People’s Republic would be ill-advised to encourage through its heavy-handed actions elsewhere.

Hu and Wen have an extraordinarily complex balancing act to perform, perhaps the most challenging management task on earth. While they cannot retreat, the way ahead is understandably unclear for a regime that took power after decades of national turmoil following the sweeping away of old imperial certainties and then spent its first 27 years under a willful, murderous but charismatic potentate who increasingly became out of touch with reality, but still presented himself as the incarnation of a reborn nation.

The first generation of China’s globalization may prove, in retrospect, to have been the relatively easy part. The work in progress ahead will be the true test.

Jonathan Fenby is author of “Modern China: The Fall and Rise of a Great Power, 1850 to the Present,” just published by Ecco HarperCollins. Click here for the excerpt.