International interest in Northeast Asian affairs has focused primarily on the stalemate between Pyongyang and Washington. Across North Korea's northern and southern borders, however, business and technology - particularly in the telecommunications industry - are booming. With Chinese telecom companies setting up relay stations near the border, an increasing number of North Koreans may now access the network. And this newfound connectivity, writes Rebecca MacKinnon, may drastically alter the cultural, political, and economic landscape of the region. As this network expands, cross-border influence from the outside world will likely become more apparent. Chinese and South Korean intellectuals and the culture they shape have grown increasingly hostile to the West, and that will inevitably affect the way North Koreans perceive themselves and the rest of the world. –YaleGlobal 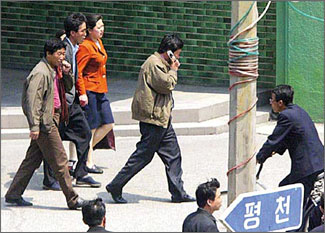 Window to the world: A North Korean using a cell phone in Pyongyang before it was banned in the capital. However, thousands in the Chinese border area still use cell phones to connect to the world for business. (Photo: Chosun.com)

CAMBRIDGE, Massachusetts: As 2005 begins, the "six-party talks" aimed at convincing North Korea to dismantle its nuclear weapons programs remain stalled. North Korea remains punitively isolated from much of the rest of the world, due mainly to the United States' refusal to establish diplomatic relations until the current nuclear standoff is resolved.

In spite of this situation, this isolation could break down substantially this year, thanks to a volatile combination: aggressive market expansion by Chinese telecom companies, dramatic growth of Sino-North Korean border trade, and continued North Korean experiments in economic reforms. As communications technology - led primarily by the spread of cell phones - seeps deeper into North Korea via China, a Northeast Asian information-technology sphere is starting to emerge, with China poised to become the power center and hub.

Chinese leaders are encouraging North Korean leader Kim Jong-il to follow in their footsteps with aggressive economic reforms. Kim has yet to take the same bold steps as China's Deng Xiaoping in the early 1980's, but some initial efforts have been made. North Koreans now have more leeway to trade privately in food and consumer goods. According to aid workers and diplomats, North Korean elites are now enriching themselves through border trade with China. As a result, China's trade with North Korea is rising very fast. For the first 10 months of 2004, Sino-North Korean trade was up 40 percent over the previous year, surpassing US$1 billion for the second consecutive year.

Chinese businesspeople - whose incentive is profit, not the spread of ideology or regime change - have become the most influential agents of change in North Korea. And their most powerful instrument is the cell phone.

Thanks to these phones, ordinary North Koreans receive information about the outside world through Chinese business contacts or relatives in China and South Korea. Defectors now living in the South are able to maintain contact with people in the North. The North Korean government's control over information has never looked so tenuous, and ironically, greedy elites - whose support Kim Jong-il requires to stay in power - play a key role in subverting the cell phone ban.

The next step could be the spread of text messaging - a communication method that helped bring down a government in the Philippines, elect a president in South Korea, and spread information about SARS in China long before state-controlled media were allowed to cover the epidemic.

But as North Koreans begin to communicate to an unprecedented degree with the outside world, this communication is likely to bind them closer to China and South Korea - not necessarily to the West, the United States in particular.

Few North Koreans have access to the internet, but for those elites who do, access is primarily available through Chinese networks and service providers. Until North Korea's energy situation becomes more reliable, and a civilian information-technology sector develops (which is unlikely to happen quickly), North Koreans will continue to rely on Chinese internet access - even as this access eventually becomes possible for a larger number of North Koreans. Unlikely as this may sound (due to the nature of the Kim Jong-il regime), the spread of Chinese cell phone network coverage into North Korea could change the picture quickly. This is especially likely considering that web-enabled phones will likely become as common in Northern China as they now are in South Korea, where many young people use mobile phones - not computers - as their primary means of accessing the internet. These devices and their networks will then spread from Northern China over the border into North Korea.

Currently, those who gain internet access through Chinese service providers are subject to the government's sophisticated filtering system, which blocks access to web sites containing information considered detrimental or hostile to the Chinese regime. Online criticism of the regime is monitored and sometimes punished with jail sentences. Thus, while online information critical of the United States and the West is widely available on the Chinese-controlled internet, negative information about the Chinese regime is not available without advanced technical knowledge. In short, North Koreans looking at the outside world via the Chinese-controlled web will see a much more favorable picture of China than of the United States.

North Koreans who visit Korean-language web sites and discussion forums emanating from South Korea will also find Korean cyberspace to be highly critical of the United States. South Korea's most popular online newspaper, OhMyNews.com, whose citizen-journalists played a key role in the election of President Roh Moo-hyun in late 2002, tends to be heavily critical of US policies toward the Korean peninsula, as well as the US troop presence.

South Korean public opinion is cooling to the United States, and the internet generation is leading the way. In September 2003, a Gallup Korea poll found that 38 percent of South Koreans surveyed believed George W. Bush was a greater threat to their security than was Kim Jong-il. Respondents in their 20s were "most likely to harbor anti-US sentiment," with 58 percent seeing the United States as the biggest threat.

The role of the West in Northeast Asia's cultural, political, and technological future will be further diminished by the fact that the most advanced innovations in mobile telecommunications technology generally come not from the West, but from South Korean and Japanese companies - with the help of a rapidly-growing Chinese manufacturing and R&D base. Also, considering that the United States is not economically engaged with North Korea, North Koreans will be heavily exposed to Chinese and South Korean cultural products (movies, cartoons and so forth), with less exposure to Western culture.

Granted, many Koreans - on both sides of the Demilitarized Zone - have mixed feelings about China's growing commercial and political power in the region. Still, commercial and technological trends point to the development of a Northeast Asian telecommunications landscape in which the United States and the rest of the West will play little role - and in which the Chinese role will be key. This telecommunications landscape, in turn, will shape the way in which Northeast Asians relate to each other and the rest of the world.

Rebecca MacKinnon is currently a Research Fellow at the Berkman Center for Internet and Society at Harvard Law School. Previously she was a correspondent and Bureau Chief for CNN in Beijing and Tokyo, and has visited North Korea five times. She is founder of “North Korea zone,” a weblog on North Korea, at: www.NKzone.org.