The CIA and Diversity: BBC

Numerous commissions have reviewed the activity leading up to the 9/11 attacks, hunting for strategies that might have prevented the threat. Of course, detecting threats in advance is challenging, but there were clues – reports of Saudi men attending flight school with no interest in landing. The problem may have been a systemic lack of diversity, notes Matthew Syed. The CIA has no trouble hiring top talent, accepting one of out of every 20,000 applicants some years. Yet recruits were mostly white, male and Protestant. “This is a common phenomenon in recruiting, sometimes called "homophily": people tend to hire people who think (and often look) like themselves,” he writes for BBC News. “It is validating to be surrounded by people who share one's perspectives and beliefs.” Intelligence analysis is complex, often requiring multiple perspectives. In early 2001, CIA officials could not imagine how a man living in a remote part of the world could threaten a superpower. Analysts familiar with Islamic culture might have understood that bin Laden viewed himself as a prophet, inspirational and strategic in a society increasingly uncomfortable with consumerism and foreign influences to the point of radicalization. Assessments from 2002 also suggested that intelligence agencies should diversify the agency’s skill requirements, including librarians who can “connect dots.” – YaleGlobal

The CIA and Diversity: BBC

The Central Intelligence Agency failed to spot clues and prevent the 9/11attacks, and Matthew Syed asks if the agency had a diversity problem
Matthew Syed
Wednesday, September 18, 2019

Read the article from BBC News about how more diversity among CIA analysts might have prevented the 9/11 attacks.

Matthew Syed is the author of Rebel Ideas: The Power of Diverse Thinking. 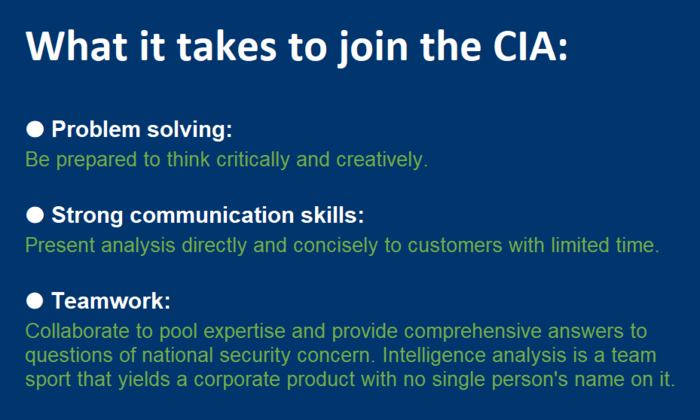 The CIA describes the work of intelligence analysts:

“CIA analysts are skilled subject-matter experts who study and evaluate information from all available sources – classified and unclassified – and then analyze it to provide timely and objective assessments. Their main customers are the president and his senior advisers.

“Intelligence analysts must be plugged into the cutting edge of fast-paced global change. Information constantly flows in from around the world, including satellite surveillance, foreign broadcasts, and human contacts, and analysts must quickly sift through data that is often inconsistent and incomplete. This is like putting together the pieces of a puzzle received at different times, from different places, and with pieces of other puzzles mixed in.”