Development of robots, artificial intelligence and autonomous machines outpaces regulations and leads to human rights concerns. “Although no ‘fully autonomous’ weapon exists at this stage, several countries, such as the United States, Russia, China, South Korea, and Israel, are thought to have developed ‘semi-autonomous’ weapons equipped with artificial intelligence,” explains Daisuke Akimoto for the Diplomat. Discussions on lethal autonomous weapons systems, or LAWS, are underway in the United Nations, though the world’s leading military powers – the United States, Russia and China – balki on regulations. Japan leads on robot and artificial intelligence technologies and calls for regulation with human controls. Akimoto concludes, “At the same time however, the Japanese government has been cautious about creating a legally binding treaty to ban LAWS due to its national interests in the dual use nature of AI technology as well as the strategic importance of AI-equipped defense capabilities as “semi-autonomous” defense systems.” Of course, regulations require compliance and enforcement, and those are other challenges. – YaleGlobal

Read the article from the Diplomat about efforts to regulate armed drones.

Daisuke Akimoto is Official Secretary to State Minister of Finance in the House of Representatives, Japan, and former Assistant Professor at the Soka University Peace Research Institute. He holds a PhD in Asian Studies and International Relations from the University of Western Sydney and an MA in Peace and Conflict Studies from the University of Sydney. His recent publications include “The Abe Doctrine: Japan’s Proactive Pacifism and Security Strategy” (Palgrave Macmillan, 2018). His views are his own and do not represent the House of Representatives or the Japanese government. This article is an abridged version of a longer piece. 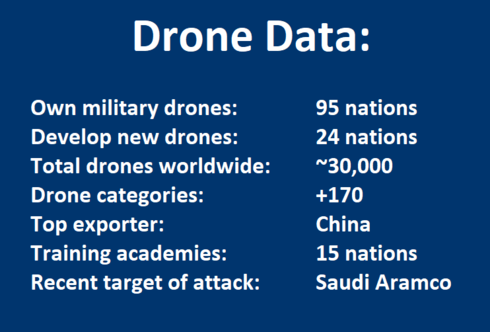 Fast developing: The number of countries and types of drones have expanded rapidly since 2010 (Source: Center for the Study of the Drone)

Obama Administration to Allow Sales of Armed Drones to Allies

The Next Drone Wars

Global Race on to Match US Drone Capabilities