Saudi Arabia and Iran, locked in a bitter rivalry, seek to influence the Middle East with little reason but their own supremacy. Author Dilip Hiro, based on his own travels and experiences as a journalist, describes a history of troubled relations and power machinations. In her review of Cold War in the Islamic World, Susan Froetschel analyzes the book’s themes. “More than one world leader has warned that enduring search for revenge is a common theme throughout the Middle East,” she writes. “That is why Hiro has no shortage of tales of absolute power used to crush opponents and why no Middle East nation should have a nuclear weapon.” – YaleGlobal

A review of Cold War in the Islamic World: Saudi Arabia, Iran and the Struggle for Supremacy
Susan Froetschel
Monday, April 1, 2019 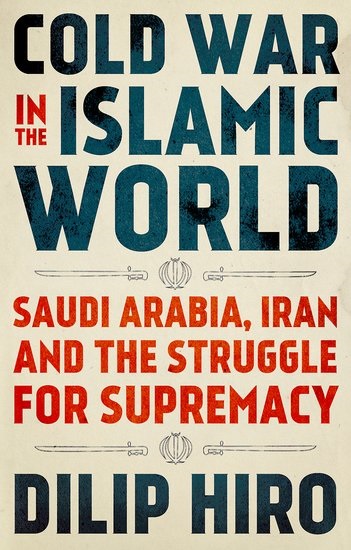 Saudi Arabia and Iran, despite a shared belief in the Prophet Muhammad as Islam’s founder, are riven by futile religious competition and vehement disagreements. Such disagreements should not matter for normal routines of trade, development or government. Yet hardliners in both countries revel in religious differences, driving deeper wedges over time, “as to who is more Islamic than the other.”

Cold War in the Islamic World by Dilip Hiro analyzes Saudi-Iranian relations as each country remains convinced that one’s woes lifts the other and the implications for the Middle East. The two oil powers, separated by the Persian Gulf, some 55 kilometers wide, have the largest economies of the region, and citizens of each should expect to feel comfortable and secure. Yet hostility is relentless, a legacy of quarrels since Muhammad’s death in 632 CE, when Islam splintered into the Shia and Sunni sects. Saudi Arabia embraces Wahhabism, an extreme form of Sunni beliefs opposing progress, and most Iranians are Shia. Among the world’s 1.8 billion Muslims, the breakdown is about 15 percent Shia and 85 percent Sunni. Only a few million Sunnis are Wahhabi, and even in Saudi Arabia, devout followers are a minority.

Religion is not the only difference, and perhaps most significant is Iran’s disdain for monarchy and Saudi decadence. “The House of Saud is extremely sensitive to any challenge on that front,” Hiro notes. Modern-day Iranians regard royalty as antithetical to Islam, an attitude reinforced after the United States orchestrated the 1953 coup against Iran’s democratically elected Prime Minister Mohammed Mosaddeq, replacing him with the authoritarian government of Mohammad Reza Shah. In 1979, Iranian demonstrators overran the US embassy, took hostages, and overthrew the Shah. The United States has since imposed sanctions and isolated the nation, encouraging Iranian self-reliance. The two rivals have had a few brief periods of reconciliation since Saudi Arabia emerged from the ruins of the collapsed Ottoman Empire, with Ibn Saud consolidating land and power in 1932. These were the result of pragmatic leaders such as Abdullah bin Abdul Aziz and Akbar Hashemi Rafsanjani, with the latter commenting in 1998: “I felt that Saudi Arabia too has realized that the way to solve our regional problems is through cooperation with Iran.”

The United States, a major influence in the region, has largely failed as a stabilizing force, as administrations tend to exaggerate some threats and ignore others. After the Iranian revolution, the United States largely sided with Saudi Arabia. Playing favorites without careful analysis such as Hiro’s produced costly and embarrassing surprises. Topping the list – the long US-led Iraq War that had the unintended consequence of strengthening Iran.

The most recent attempts at isolating Iran with sanctions by the Trump administration target the country for its nuclear weapons research. The United States withdrew from the negotiated joint agreement with Iran, China, France, Germany, the United Kingdom and the European Union – even though international inspectors report that Iran is in compliance. Meanwhile, the United States prepares to sell technologies allowing Saudi Arabia to construct nuclear power plants.

Saudi leaders are laser-focused on reducing Iran’s power in the Middle East, and that required good ties with Donald Trump. Ignoring Trump’s harsh campaign rhetoric about Muslims, Saudi leaders offered a lavish welcome during the US president’s first trip overseas, with Hiro noting, “They found it easy to flatter him since they were themselves often surrounded by sycophants.” Signs welcoming Trump lined streets of Riyadh, “Together we prevail.” The implication is that Saudi Arabia – keeper of Islam’s holiest sites – selfishly turns its back on other Muslims in multiple ways: overlooking US efforts to introduce a Muslim travel ban, dropping any pretense of support for Palestinians in the long-running conflict with Israel and turning on Qatar for maintaining good ties with Iran. Saudi bullying only drove Sunni Qatar closer to Iran, and Hiro concludes that Saudi Arabia, at heart, is in a battle for supremacy with little interest in cooperation or compromise.

Many readers might assume that Iran is the more steadfast nation, certainly deserving no more condemnation than Saudi Arabia might. The book’s most riveting sections describe Saudi Arabia’s bankrolling development of nuclear weapons by Pakistan, attempts to buy loyalties with cash and abrupt policy shifts while engaged in opportunistic zigzagging. One stunning example was Saudi Arabia reversing its long-time support for the Muslim Brotherhood. The organization formed a political party in Egypt, with Mohamed Morsi winning the presidency in 2012. Saudi Arabia, disturbed when Morsi began improving Egypt’s relations with Iran, funded massive protests and a military coup in 2013.

More than one world leader has warned that enduring search for revenge is a common theme throughout the Middle East. That is why Hiro has no shortage of tales of absolute power used to crush opponents and why no Middle East nation should have a nuclear weapon. Some stories unfold in other countries, like the civil war in Yemen. Others are close to home – in Tehran during the Green Revolution or in Saudi Arabia, with the invasion of the Shia city of Awamiya or the upending of royal succession with detention of 381 wealthy Saudis at the Ritz Carlton Hotel in 2017 and confiscation of $100 billion in assets.

The book, based on Hiro’s years of research and travels as a journalist, is terse in reporting historical details with disciplined focus in motivations. The book is an easier read for those who closely follow news events from the Middle East in recent years though experienced scholars are sure to appreciate his thoughtful juxtaposition of events that underscore patterns. Readers would benefit from compiling their own timelines and lists of leaders, connecting ties among individuals and ever-shifting priorities.

Saudi Arabia and Iran have both neglected needed reforms. Reducing military spending and aggression is a place to start. Saudi Arabia is the world’s third biggest military spender, forcing neighbors like Iran to spend more, too. While Iran does not place in the top 15 military spenders, estimates suggest that the Iranian Revolutionary Guard Corps controls anywhere between 20 and 40 percent of Iran’s economy.

Leaders must worry about domestic threats reinforced by mismanagement, corruption, over-dependence on oil, and temptation to join conflicts that make oil prices climb. Saudi-Iranian relations, as well as ties with the West, divide citizens in each country. Hardliners in Iran rely on the United States as a foil, while Saudi leaders find it “increasingly onerous to reconcile its alliance with the United States and the maintenance of an Islamic image at home.”

Hiro analyzes each country’s ability to engage in self-reflection from the start, describing how the national museums in Riyadh and Tehran reflect centuries of entangle history. He cautions, “an Islamic Republic is radically different from a theocratic, absolute monarchy.” A reader imagines reactions to Hiro’s book as text used in Saudi or Iranian classrooms. Unfortunately, Hiro’s work is unlikely to find its way to the places where it's most needed.

Susan Froetschel is the editor of YaleGlobal Online and the author of five novels, including Fear of Beauty and Allure of Deceit.

The Islamic Challenge and the United States

Clouds Over Charities for Refugees in Islamic Countries

The People Reloaded: The Green Movement and the Struggle for Iran’s Future

The Politics of Chaos in the Middle East

A detailed, timely review by Susan. Shi'ite - Sunni hatred runs deep and Hiro might have underestimated the extent to which religious differences contribute to animosity in the Islamic world. However, he makes valid points about Iran's disdain for the House of Saud.