Following a coup in Sudan and negotiations, the longtime leader is on trial for corruption. An economist leads the transitional government and elections are scheduled in 2022. Generals “signed the agreement only after coming under intense pressure from foreign powers,” reports the Economist, describing the new government made of five soldiers and six civilians. Many of the generals became wealthy in the previous government, and the army still controls the powerful defense and interior ministries. “The generals may worry that real reform will lead to accountability.” The country and even the opposition remain fragmented, and rebel leaders in Darfur and elsewhere rejected the power-sharing agreement, reports the Economist. The new government hopes for removal from the US lit of state sponsors of terror and assistance from international groups like the International Monetary Fund and the World Bank. – YaleGlobal

A power-sharing deal with generals in fragmented and economically struggling Sudan paves the way for partial civilian rule – the next election is 2022
Thursday, August 22, 2019

Read the article from the Economist about a government in transition in Sudan.

Read about Sudan from the World Bank: “Comprehensive U.S. sanctions on Sudan, levied in 1997 and expanded in 2006, were lifted in October 2017. This generated initial optimism, but foreign investors and commercial banks have been reluctant to reengage. Trade and financial transactions between Sudan and the World economy remain very limited as Sudan continues to be designated by the U.S. as a state sponsor of terrorism, preventing full normalization of relations with the U.S.” 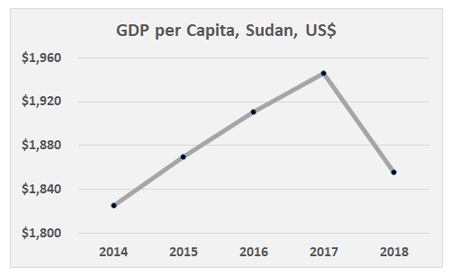