Consequences of the 2011 triple disaster of earthquake, tsunami and nuclear meltdown in Japan linger today. Fuel rods require ongoing cooling with freshwater. More than 1 million tons of contaminated water is stored in tanks including underground ones secured by walls of ice, 30 meters deep and 1.6 kilometers long. Treatment technologies remove 62 of 63 radioactive elements, reports Roger Cheng for CNET, with treated water containing tritium at 30 times the level deemed safe. Japan suggests it has run out of storage space for contaminated water at the Fukushima nuclear power plant, and South Korea encourages the international community to block release into the ocean, requesting intervention from the International Atomic Energy Agency, reports Choi Moon-hee for Business Korea. “Moon Mi-ok, first vice science and ICT minister of Korea and Um Jae-sik, chairman of the Nuclear Safety and Security Commission will attend the IAEA General Assembly in Vienna on Sept. 16 to bring the issue to the attention of member countries and make it a hot topic for discussion.” Japan suggests that, despite leakage, concentrations of radioactive material have not risen in nearby waters. Estimates suggest decontaminating the facility could take 40 years. – YaleGlobal

Read the article from Business Korea about concens over releasing radioactive-contaminated water from Fukushima into the ocean.

The International Atomic Energy Agency and Japan monitor and provide updates on the cleanup. 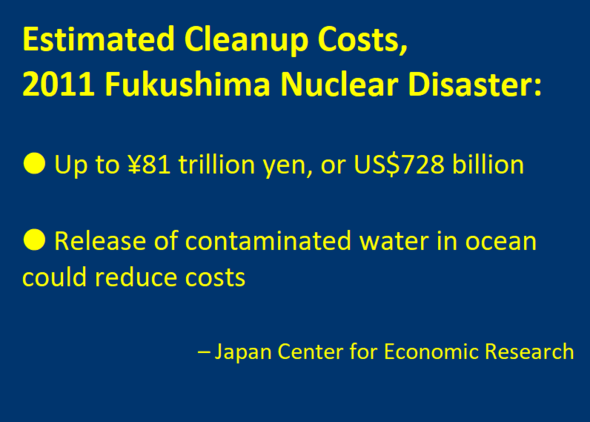 The Morning After Fukushima

After the Fukushima Disaster